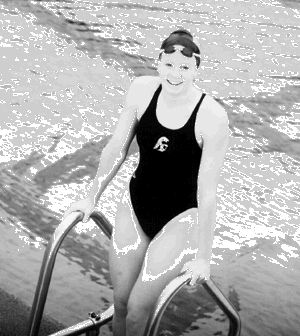 Look out, world, the Trojans are coming. A dozen or more USC athletes – both current students and alumni – will represent the United States or, in the case of international students, their own homelands in the 1996 Olympic games in Atlanta.

While not all event trials have been completed yet, to date it appears that at least 12 Trojans will compete in sports such as swimming, diving, men’s and women’s volleyball, baseball, women’s basketball and track and field events.

The Atlanta games, which open in mid-July, mark the 100th anniversary of the modern Olympics. USC’s Olympic tradition is almost as long: the first Trojan athletes to compete in the Olympics date back to 1904. USC’s first gold medalist was Fred Kelly, who won first place in the 110 meter hurdles at the 1912 Stockholm games. In 1928, fencer Helene Mayer became the first Trojan woman to win a gold medal, in Amsterdam.

Many more USC athletes have competed – and brought home medals – throughout the years. A few examples:

* Springboard diver Sammy Lee won gold and bronze in 1948, after waiting eight years to compete (both the 1940 and 1944 games were cancelled due to World War II).

This summer, many Trojan athletes will be making waves in Olympic pools:

* 1995 engineering graduate and Rhodes Scholar Desmond Koh (representing Singapore) will swim the 200- and 400-meter individual medley and the 100- and 200-meter breaststroke;

* Senior biology major Cito Vasconcellos (representing Ecuador) will swim the 100- and 200-meter butterfly and is a member of the 400-meter free relay team; and

Evans came to USC at the urging of Mark Schubert, her coach from the University of Texas. Schubert, who was head coach for the U.S. Olympic women’s team in 1992 and was an assistant in 1980, 1984 and 1988, left Texas in 1992 to coach the USC men’s team. Evans came to USC as a volunteer assistant coach; she now represents the Trojan Swim Club and has been elected captain of the U.S. swim team.

“We’re very excited about the potential of the American team,” said Schubert, who now coaches the combined men’s and women’s teams at USC and is again an assistant women’s swimming coach for the U.S. Olympic team. “We feel that swimming in Atlanta will give us tremendous home-field advantage very similar to when we swam at USC in 1984. Janet, Kristine and Brad will be tremendous leaders for the American teams – they’re expected to be very successful in their events,” he said.

Former USC basketball star Lisa Leslie – the Pac-10’s leading scorer and rebounder – said in a recent interview that in the 10th grade she made it her goal to play on an Olympic team. She will carry the Trojan spirit to the games in Atlanta as a member of Team USA, as did USC basketball greats Cheryl Miller and Pam McGee in 1984 and Cynthia Cooper in 1988 and 1992. Miller, McGee and Cooper came home with gold.

In addition, it’s practically a certainly, according to USC director of sports information Tim Tessalone, that Paula Weishoff will secure a place on the 1996 U.S. volleyball team. Weishoff was one of five Trojans who took a silver medal as a member of the 1984 team, and bronze in 1992. Also expected to represent the Trojans, Tessalone said, are 1992 Olympian Bryan Ivie in men’s volleyball and baseball outfielder Jacque Jones.

In the coming weeks, look for many more Trojans to win Olympic berths. Let the games begin – Trojans are ready to “fight on.”