Emily Martinuik found herself contemplating suicide on a freeway overpass six years ago. Her youngest son had died at the age of 19 in a bus accident, she struggled with what was later diagnosed as bipolar depression, she had lost her business and her home, and she was facing the prospect of living on the street.

But instead of jumping, Martinuik decided to climb down and check herself into Olive View hospital in Sylmar, beginning the process of turning her life around. 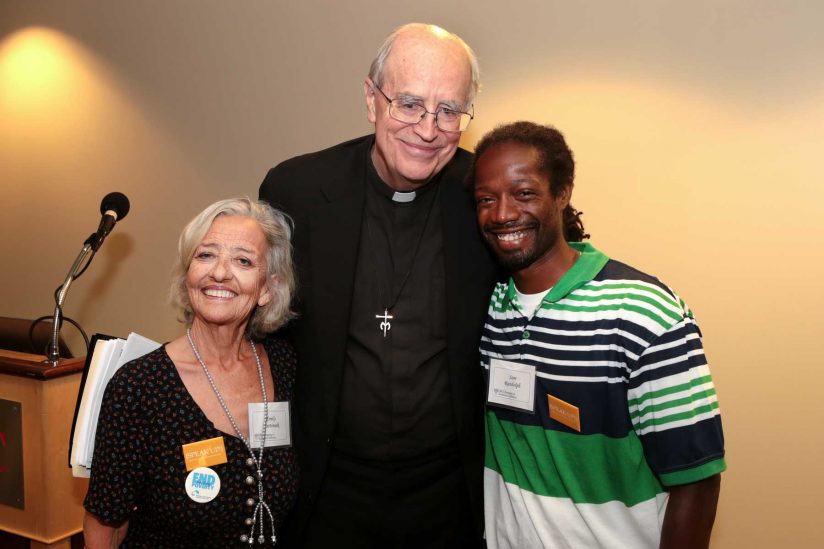 “Because of L.A. Family Housing and the Department of Mental Health, I have a new life,” said Martinuik, who is now an advocate with CSH Speak Up, an organization that uses housing as a platform for providing services to the most vulnerable people. “I live in a safe environment that I can afford, I have a supportive community and I’ve been given the opportunity to advocate for others.”

Martinuik told her story at the Religions and Homelessness High-Level Roundtable held as part of the university’s initiative to end homelessness. Faith leaders, civic leaders and academicians gathered on the University Park Campus to get a better understanding of the complexities of homelessness in Los Angeles, share the most effective responses to it and foster greater cooperation among religious groups in the process.

Los Angeles County Supervisor Mark Ridley-Thomas said that to compel action, homelessness needs to be viewed as a “moral crisis.” He noted that it is the top-ranked issue in public opinion polls, contributing to the overwhelming passage in March of Measure H, which authorizes a 0.25 percent county sales tax for 10 years to fund much-needed homeless services and prevention.

They need the safety and control of an apartment before moving on and tackling other things.

According to the Los Angeles Homeless Services Authority, there was a 23 percent increase in homelessness in 2017, with nearly 43,000 unsheltered people and nearly 15,000 in shelters. Yet Benjamin Henwood, assistant professor at the USC Suzanne Dworak-Peck School of Social Work, who has extensively researched homelessness, said there has been progress in responding to the issue.

He pointed out that in 2016 the county housed more than 14,000 chronically homeless, in part through the more recent approach of providing housing first and then other services such as mental health care and substance abuse programs.

“They need the safety and control of an apartment before moving on and tackling other things,” said Henwood, who co-wrote the book Housing First: Ending Homelessness, Transforming Systems, and Changing Lives.

But he added that social and spiritual needs often are not met, and he asked the gathering, “How can all of you play a role? How can we make a difference connecting to one another?”

Later, a panel of religious leaders spoke about the challenges of engaging their congregations in the issue of homelessness. 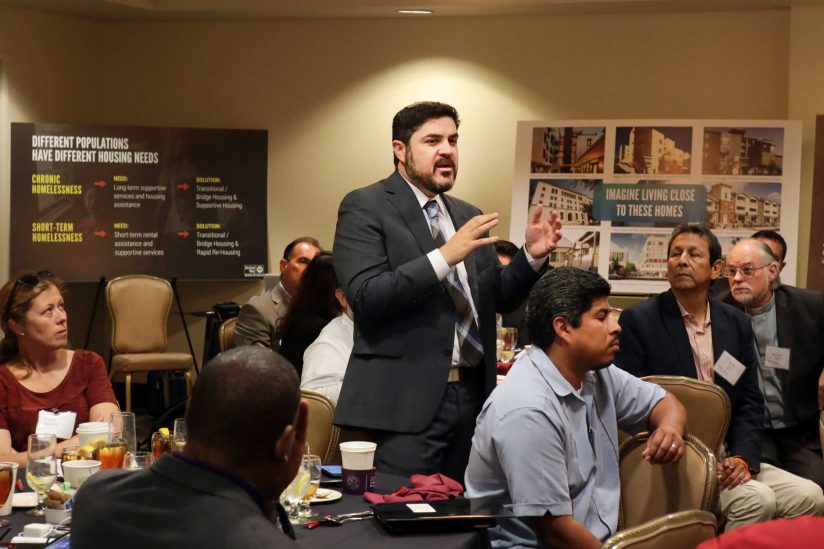 Rabbi Noah Farkas of Valley Beth Shalom synagogue said he placed biographies and portraits of homeless people in the hallways. Similarly, the Rev. Zachary Hoover of L.A. Voice said it is important for people to encounter homeless individuals through hearing their stories and personal interaction.

After revealing her story, Martinuik, who said she was born a Catholic, converted to Judaism and is now a Buddhist, went on to explain that her faith has given her a “debt of gratitude, which I am now repaying to the homeless community through my advocacy work.”

In concluding the event, the Rev. James Heft, founder and president of the Institute for Advanced Catholic Studies, said, “May the three angels who appeared to Abraham as homeless strangers and whom he received so hospitably open our hearts to the homeless, for every homeless person is or ought to be an angel to us.”

The participants ended their time together by signing a “moral imperative” to support practical solutions on housing and to speak out more on behalf of homeless people. The agreement ends with, “We will persevere in this commitment until all our neighbors dwell in dignity.”

Once a homeless kid, then in foster care. Up next: a USC doctoral program

As a child, Mich Hamlin lived on the streets with his parents. Next month, he enters USC’s physical therapy program.

Latest count shows number of L.A.-area homeless up 23 percent in one year

USC researchers provide key analysis of the data gathered annually by the county and city, as part of the university’s Initiative to Eliminate Homelessness.

Collection of gently used clothing and household items starts Tuesday and continues through May 11. See why Adoree’ Jackson is taking part.