The real estate business may be seen as dominated by men, but it’s attracting more and more women — including nearly 100 women pursing master’s and bachelor’s degrees in real estate development at the USC Price School of Public Policy.

“Playing a role in shaping cities is driving more and more women to the real estate profession,” said Sonia Savoulian, USC Price associate director for Program in Real Estate, at the school’s Women in Real Estate Luncheon. “Women want to have a role in driving decisions for real estate development and investment.”

Equal pay for men and women — something that is not yet a reality in the workplace — was one topic addressed by a candid panel at the event.

I’ll say one quick thing on raises. I’ve found you should always be pushing and asking because it’s very unnatural as a woman to ask.

“I’ll say one quick thing on raises,” said Jessica Palmquist ’10, senior acquisitions analyst at Clarion Partners. “I’ve found you should always be pushing and asking because it’s very unnatural as a woman to ask. And I found that all of my male counterparts, exactly my same age, will always ask.”

“I was always cautious because I felt, ‘Well, you know, at some point I want kids. It’s going to be tough already asking to take time off to go on maternity leave,” she said. “And gosh, if I’m asking for more money, that’s just going to make that ask even harder.’ And I think that was a mistake. I’ve now had two children while at this company, and it was really a non-issue. And I was just telling myself that I needed to stay low profile in order to not make it difficult for me to disappear to do what is totally normal to do. So that was a lesson learned, and I try to be much more aggressive now.”

The social side of real estate

The panelists also discussed the challenges of navigating the social side of the real estate business. From evening drinks to golf tournaments to ski weekends, many deals get done outside of business hours. Everyone agreed that being “one of the guys” can require some practice. 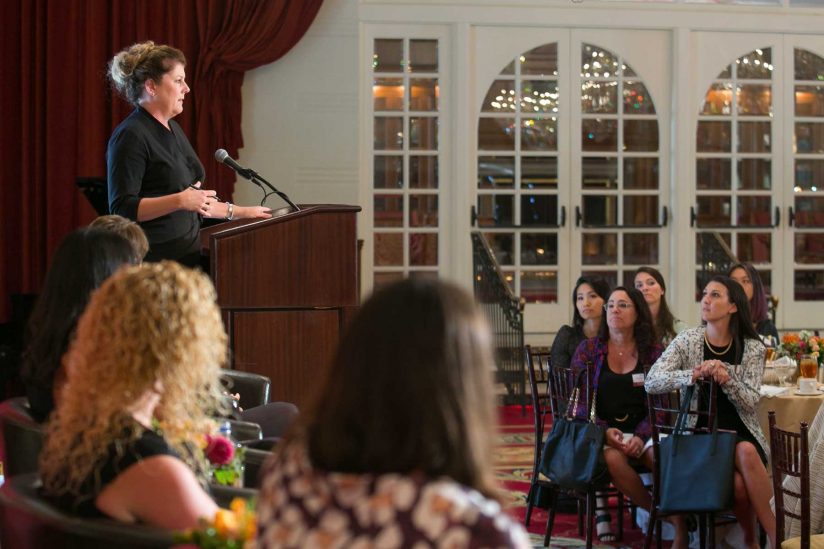 Clare De Briere talks about the efforts she made in order to succeed in a male-dominated environment. (Photo/Tom Queally)

“I’m not a sports person and all the guys would sit around at lunch and talk sports,” said Clare De Briere MRED ’97, founder of C+C Ventures and chair of the Urban Land Institute, Los Angeles. “I started reading the sports section of the L.A. Times cover to cover. There are things from a social standpoint that I think we’ve all had to do to engage and become one of the pack.

“You make these compromises,” she added, “but you open to the door so you can get to the point where you can say, ‘Hey look, let’s talk about this deal.’ And all of a sudden, it equalizes you a little bit. So practice your golf swing. Go on the fishing trip.”

“Evening events are really hard,” she said. “Breakfast events are almost impossible. So lunches I can do because it’s during the workday.”

McElyea and Lindsay Garcia ’11, assistant vice president of U.S. Bank, mentioned that their husbands initially found it strange that they spent so many evenings at meetings with male colleagues.

“There are so many after-work events and dinners,” Garcia said. “And my husband always asks, ‘Where are you going? Who are these people?’ Especially when I started, it was primarily middle-aged men that I’m going to dinner with. It’s a weird scenario.”

In such a male-dominated environment, the panelists noted that the friendship and mentorship of female colleagues are especially valuable.

“I am part of a group of real estate women professionals who meet quarterly for lunch,” Palmquist said. “It’s been a huge resource for me just because there aren’t as many women in the office.”

During the question-and-answer session that followed, the audience asked several pointed questions: What do you have to give up in order to have children? How do you connect with women in the real estate industry? How do you deal with explicit exclusion? How do you invite yourself to the all-male happy hour?

The panelists rounded out the conversation by offering advice on achieving work-life balance.

“Nothing’s ever going to be perfect,” Olson noted.

“Give or take,” Garcia said.

“You won’t always finish everything on a given day,” McElyea added.

“And I would say, have fun every day,” De Briere concluded. “Look for ways to make your days joyful.”

William McMorrow is chairman and CEO of the real estate investment and services firm Kennedy Wilson.

This year’s Ostrow School White Coat Ceremony marked not only the start of dental education for Parker White but also a new professional and personal beginning.