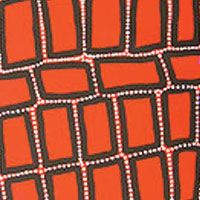 The exhibition includes paintings that represent communities in Central Australia.

Ronald Gottesman, professor emeritus of English in the USC College of Letters, Arts and Sciences, is co-curator of an aboriginal paintings exhibition that opens Friday, March 12 in Santa Monica.

“My interest in Australian aboriginal art is an unanticipated consequence of my lifelong interest in the visual arts, especially painting,” Gottesman said.

An epiphany came in college, he said, when he discovered Durer’s engravings for Dante’s “Inferno,” which propelled him from pre-med into literary studies. His interest in the power of images deepened, and early in his academic career he taught film history, appreciation and criticism.

Gottesman began collecting art about 15 years ago. First he bought Native American paintings, then Mexican works, then Inuit pieces. Then six or seven years ago, he began to study Australian aboriginal art, and serious collecting began after a trip to Australia.

“It is wonderful in retirement,” Gottesman said, “to return with renewed passion to deferred interests. And without the need for committee approval.”

His Web site, www.aboriginality.com — an online gallery — has, he said, “a single overarching objective: to spread the good news about contemporary Australian aboriginal art.”

Gottesman said a portion of profits from his site supports programs that enhance the quality of life among aboriginal peoples of Australia.

The exhibition is co-curated by Gottesman and Vicki Salisbury of Walkabout Gallery, www.walkabout.com.au in Sydney. Walkabout is affiliated with World Vision Indigenous Programs, which sponsors and supports development, health, leadership, education, advocacy and other community projects across Australia.

The Hon. John Olsen, Consul General of Australia, will offer opening remarks, and refreshments will be provided by the Australian Consul of Los Angeles.

The exhibition, which will be on display through April 3, will be at the L.A. Art Exchange, 2451 Broadway in Santa Monica. Reservations are recommended; valet parking is available for the opening.