A study published in The Journal of Pathology examines the role of the enzyme monoamine oxidase-A (MAO-A) in Hodgkin’s lymphoma.

The study was led by USC University Professor Jean C. Shih, whose pioneering research has provided insights into the enzyme’s effects on brain development, aggression, anxiety and autism spectrum disorders. 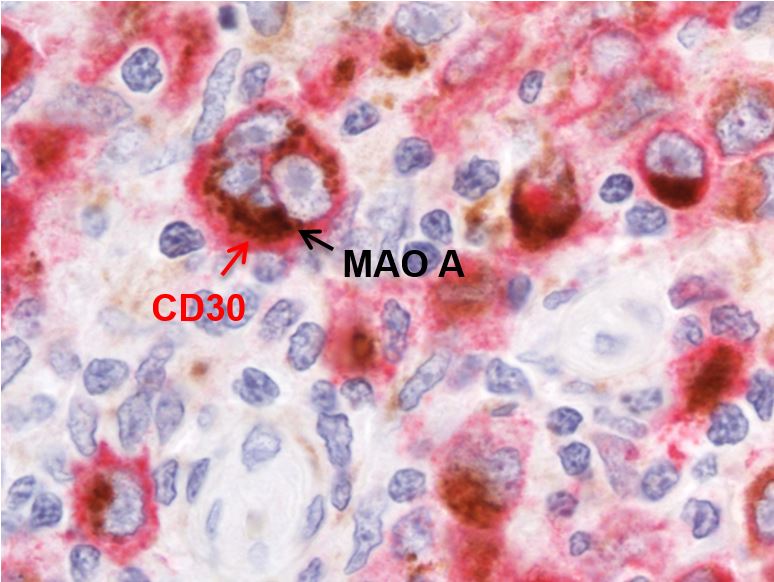 Researchers evaluated 427 human tissue specimens with a spectrum of lymphoma and found MAO-A selectively expressed in Hodgkin Reed-Sternberg cells — the hallmark malignant cell of classical Hodgkin’s lymphoma — but not in other subtypes of the disease. They also found that MAO inhibitors reduced the growth of classical Hodgkin’s lymphoma, alone or in combination with current treatment.

However, “combining MAO-A inhibitors with current treatment was more effective than each treatment alone,” said Pei Chuan Li, a postdoctoral fellow in the Shih lab and first author on the publication.

The study builds upon recent research by Shih and co-investigators showing that overexpression of MAO-A facilitates the progression of glioma brain cancer as well as prostate cancer, and that antidepressant inhibitors of the enzyme have potential as novel therapeutics for these cancers. Ongoing clinical and preclinical studies on prostate cancer have proved promising.

Classic Hodgkin’s lymphoma — a cancer of the lymphatic system, part of the immune system — is one of the most common types of lymphoma among adolescents and young adults. Approximately 9,100 cases are diagnosed in the United States alone each year.

While treatments such as chemotherapy and radiation often lead to full remission, nearly 20 percent of patients either relapse or do not respond at all. In addition, while the five-year overall survival rate is relatively high at 85 percent, adverse effects related to treatment include increased risks of secondary cancers, cardiovascular disease and pulmonary fibrosis.

These latest findings suggest that MAO-A may provide new insights into the biology of the subtypes of lymphoma, as well as offering potential aid in diagnosing various lymphomas that can be difficult to differentiate.

“Our long-term goal is to better understand the molecular basis of cancer progression and provide insights on developing better diagnostic tools and treatment for cancer patients, to reduce their suffering,” said Shih, who directs the USC-Taiwan Center for Translational Research based at the USC School of Pharmacy. She holds a secondary appointment in the Keck School of Medicine of USC’s Department of Integrative Anatomical Sciences and is a member of Academia Sinica, Taiwan. “We hope these findings will bring new hope to patients and their families.”

In addition to Pei Chuan Li of the School of Pharmacy and the USC-Taiwan Center for Translational Research, Shih’s co-investigators include Imran N. Siddiqi and Wendy Cozen of the Keck School of Medicine; Chieh Hsi Wu of the College of Pharmacy, Taipei Medical University; Anja Mottok and Christian Steidl of the Center for Lymphoid Cancer, BC Cancer Agency, Vancouver, Canada; and Eric Y. Loo of the Dartmouth-Hitchcock Medical Center.

The project was funded by the Daniel Tsai Family Fund and the National Institutes of Health.

With support from loved ones and imaginary dragons, a little girl copes with cancer

When a family friend took on the battle of her young life, a PhD student made her the hero of a children’s book.

One participant’s physical challenges inspire an app designed to help himself and others.