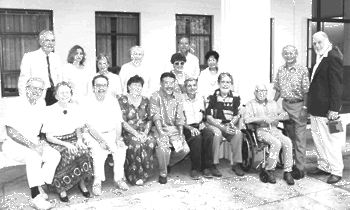 Few people may remember the School of Architecture’s Industrial Design program, which existed for only 22 years and graduated 225 students. But a small group of these alumni refuses to let the program be forgotten.

As chair from 1949 to 1969, Merendino was the backbone of the program and the reason so many alumni have maintained contact, said Barbara Elwood, who graduated from the program in 1957 and is working as coordinator of the art history department in the College of Letters, Arts and Sciences.

Now they are bringing together a variety of written materials, including personal statements and oral histories, as well as records relating to courses, professors, professional development and other documents, slides or photographs that reflect their experience in the program and how it influenced their careers. University Archivist Paul Christopher and Architecture and Fine Arts Library head Amy Ciccone are helping to pull together the archive.

“There are so many things about the I.D. program that are completely unknown, not just on campus but even in the School of Architecture,” Elwood said. “There was no information anywhere about the existence of the program, so we decided to pull together this archive to store in the room that is named for Sal Merendino.”

The drive to build the archive was kicked off Aug. 11 with a gathering of alumni in the Harris Hall patio. Ten alumni as well as Merendino, his wife, Janet, and School of Architecture dean Robert Timme attended.

Created to meet the increasing need for training in the field of industrial design, the Industrial Design program was approved in the School of Architecture in 1945 under dean Arthur B. Gallion. It responded to the rising importance of the machine in the industrial technology of the day, Elwood said.

“The discipline developed during the Depression, as an answer to the problems of unemployment. If products were designed properly, they would be more appealing to the public,” Elwood said.

The program prepared students to design in conjunction with machine processes and mass production. The course work began with training on simple machines and hand tools, emphasizing the development of craftsmanship to provide a sound understanding of materials and processes. The advanced study expanded the student’s knowledge of industrial processes and enlarged the scope of training in industrial design.

The curriculum included courses in the sciences and mathematics as well as engineering and technical drawing.

The curriculum also incorporated classes that gave students an understanding of the issues of contemporary society and stimulated their thinking about the functional forms emerging from contemporary issues, Elwood said.

Advisors to the program included some of the major designers of the day, such as Raymond F. Loewy and Walter Dorwin Teague, both of whom had offices in New York and Los Angeles. Guest lecturers included Charles Eames and Buckminster Fuller.

Enrollments dwindled in the late 1960s, and the program was discontinued. But alumni have continued to meet periodically. Their careers ran the gamut, from engineering to furniture design. “Alumni are doing all kinds of things,” Elwood said. One alum designed early Samsonite luggage while another came up with the original design for ATM machines.

“Everybody who’s an alum of the program agrees that the basic thing it taught was a thinking process and a problem-solving process,” Elwood said. “These things are applicable no matter what you decide to do.”

Alumni with Designs for an Industrial Archive