On Sept. 19, 1987, the Trojan Marching Band supported USC football at the Los Angeles Memorial Coliseum as the Trojans defeated Boston College in their second game of the season.

As band members celebrated the win, they couldn’t possibly imagine the great tradition they were starting. Since that day 30 years ago, the band has not missed a USC Trojans contest, at home or on the road, a streak that will reach 380 games when the band travels to Berkeley this weekend. This consecutive game streak — unparalleled among college marching bands — may never have started, however, if the Trojans hadn’t entered the matchup with a loss.

Twelve days earlier, USC had dropped its season opener at Michigan State by two touchdowns. The Trojan Marching Band hadn’t traveled to East Lansing. After the game, first-year coach Larry Smith vowed the Trojans would never go on the road again without “The Spirit of Troy” supporting them in the stands. Though it was his first game as head coach, he had seen the band take over a football stadium a few times before — from the other sideline.

In 1980, the entire band had traveled to Tucson for the Trojans’ first visit to Arizona Stadium. It was Smith’s first season as coach of the Wildcats. When he saw (and heard) the band enter the stadium, he recalled later, he knew right then his Wildcats weren’t going to win. The band epitomized the Trojan mystique, the tradition and swagger. Arizona just couldn’t compete with that. 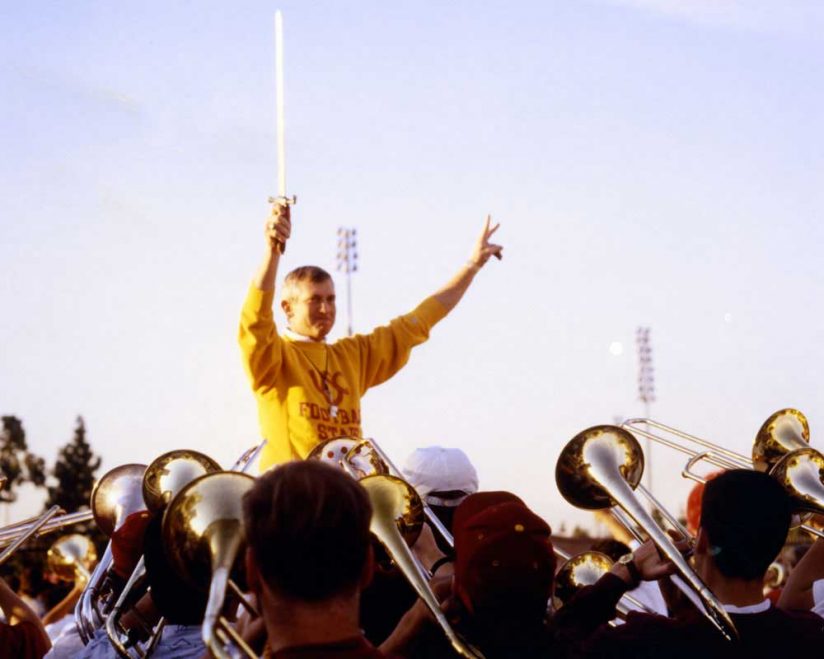 Director Arthur C. Bartner honored Coach Smith’s request back in 1987 and has never since considered missing a game. Now three decades and seven coaches later, the band has faithfully supported the Trojans wherever they play. From Honolulu to Happy Valley and from the Orange Bowl to their second home in the Rose Bowl, band members have traveled more than 335,000 miles (or more than 13 times around the world).

Whether by bus, plane or even train, The Spirit of Troy will get to a Trojan football game by any means necessary. In the early days of the streak, the band bussed 1,150 miles to Seattle to play the Huskies. To get back to Notre Dame every other year, the nearly 350 band members and staff are split onto multiple flights to Chicago. In 2015, it took four.

No matter how they get there, band members take the maxim “Getting there is half the fun” to heart. For the annual Weekender trip to the Bay Area, band members dress in costumes to fit themes they choose for each of the seven buses. And every diehard Trojan fan knows it’s a must to dine at Gino’s East in downtown Chicago the Thursday night before the game against the Irish for the annual silverware and plate performance by the USC Drumline.

During the streak, the band has performed for over 24.5 million college football fans. Only about half of these have been Trojan fans. The other 12 million are not happy to see The Spirit of Troy march into their stadiums. While USC football players are escorted on and off the field without coming face-to-face with fans, the band must march through the home crowd’s tailgates and stand in hostile sections, bearing the brunt of the fans’ anti-Trojan ire.

Band members wouldn’t have it any other way. They enjoy infuriating the stadium every time they raise their horns to blast “Tribute to Troy.” And despite the abuse that rains down on them for three hours, it’s all worth it when, after a hard-fought win, players approach the USC section with fingers raised as they play “Conquest!”

To ensure this great tradition continues beyond Bartner’s planned retirement in 2020, the program recently kicked off a $6 million travel endowment. Although the program does receive some support from USC Athletics and USC Student Affairs, the travel budget has not changed much since 1980 — seven years before the streak began. The bulk of the $450,000 it takes to travel to each game every year is raised by Bartner and the band. With the constantly rising cost of travel, the fundraising effort becomes more difficult each year.

The Travel Endowment — a part of the larger $15 million USC Trojan Marching Band Initiative Honoring the Legacy of Arthur C. Bartner — will provide a budget in perpetuity for at least a portion of the band to travel to every game. These trips not only boost the Trojans’ chances on the gridiron but provide new experiences and indelible memories for band members both at the game and on the road.

With the support of loyal Trojan alumni, the Trojan Marching Band will be able to continue the great tradition began by Coach Smith 30 years ago. That way, upcoming generations of Trojans — football, band and fan — can celebrate with victory signs in the air across the country for years to come.

A dream comes true as the long snapper takes the field during USC’s win over Western Michigan, and leaves his mark on the scoreboard.