Scientists have identified an abundance of autism-related mutations in a single gene, suggesting a genetic hotspot behind the enigmatic disorders.

Researchers honed in on a gene called TRIO after they studied data from thousands of genomes of people on the autism spectrum. The TRIO gene produces a protein that influences the development and strength — or weakness — of the connections between brain cells.

The scientists found eight autism-associated mutations clustered within a small region of the Trio protein. Changes in the protein’s function early in a child’s brain development can set off a chain reaction that stunts connections between brain cells. In turn, that hinders the brain’s ability to store and process information.

Autism affects about 3.5 million Americans, and about 1 in 68 U.S. children, according to the Centers for Disease Control and Prevention. It can interfere with socialization and communication and is often accompanied by intellectual disability. No single cause of autism has been identified.

“Many genes have been implicated in autism,” said Herring, an associate professor for USC Dornsife’s Section of Neurobiology. “What we want to know is: What do these genes have in common? We are looking for the points of convergence that ultimately lead to this spectrum of disorders.”

The findings were published Sept. 19 in the journal Nature Communications.

A mass of genomic information

Herring’s laboratory at USC Dornsife studies the molecular mechanisms underlying neuroplasticity. That includes the strengthening or weakening of synaptic connections between cells that influence the brain’s ability to store and process information. He explores how disruption of those mechanisms might lead to neurodevelopmental and neuropsychiatric diseases such as autism.

For this study, Herring and his team studied the genomes of 4,890 people with autism-related disorders. Sifting through the data, they hunted for genetic mutations that may have a significant role in the development of autism.

“TRIO ended up very high on our list,” Herring said.

The team found eight mutations associated with autism in a small area of the TRIO gene — the GEF1/DH1 domain. This domain encodes a specific area of the Trio protein that turns on another protein, Rac1, that builds the scaffolding for the brain’s connections.

In a normal brain, the GEF1/DH1 domain binds to and activates Rac1, prompting the growth of actin filaments that form the scaffolding.

Most of the autism-related mutations discovered in this study prevent the Trio protein’s ability to activate Rac1. The interference causes the scaffolds to break down, weakening the brain’s connections. As a result, the brain cells have trouble communicating with each other. 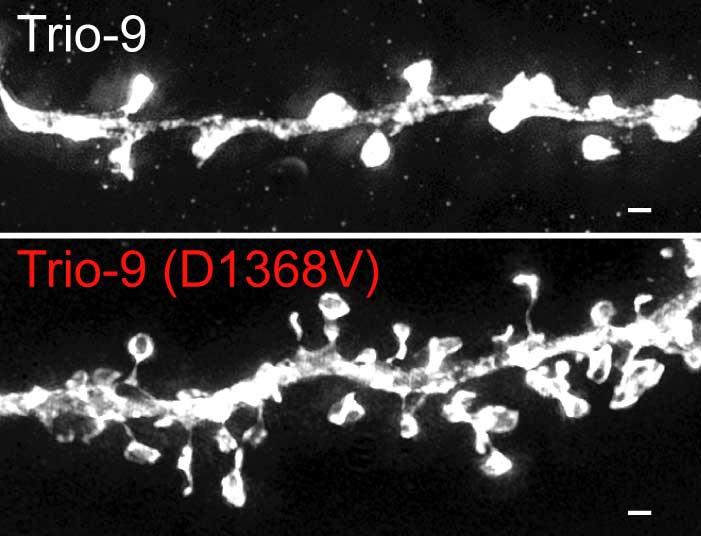 USC researchers believe that brain cells in individuals with an autism-related disorder have more connections between neurons (visible in the protuberances in the bottom panel) because of mutations in the TRIO gene. (Image/Courtesy of Bruce Herring)

“It is really striking that all disruptive mutations are found in the positions where they either weaken the domain structure or block its interactions with Rac1, a key hub for the neural development pathways,” said study co-author Vsevolod Seva Katritch, an assistant professor for biological sciences at the USC Michelson Center for Convergent Bioscience and USC Dornsife.

Previous studies identified a variety of types of problems with brain cell connections that are linked to autism. In some cases, the connections between brain cells appear weaker than normal. In other cases, they seem too strong.

“Most of the mutations we have found in Trio weaken the protein and result in weaker connections between brain cells,” Herring said. “However, one mutation found in an individual with severe intellectual disability surprised us. It causes Trio to become much stronger. When this mutant form of Trio was put into brain cells, it caused them to have way too many connections.”

The ability of our brains to increase and decrease the strength of connections between brain cells is essential for normal brain development.

“I don’t think it really matters if connections between brain cells are too strong or too weak. I think either case can contribute to the development of autism,” Herring said. “The ability of our brains to increase and decrease the strength of connections between brain cells is essential for normal brain development; our brains must be plastic. Mutations that push connections too far in either direction are likely to impede our brain’s ability to change in appropriate ways.”

“We believe autism-spectrum disorders are likely to develop from mutations that take away the brain’s ability to change during a critical time point in a child’s brain development, when the brain cells are trying to establish the appropriate connections and build the right circuits,” Herring said.

A potential link between autism and schizophrenia

Equally interesting to what Herring’s lab found is what they didn’t find. TRIO has a sister gene called KALRN. The two genes are very similar and are part of the same signaling pathway in brain cells.

“We think the critical difference between these two genes is when they are active,” Herring said. “The TRIO gene is active when we are very young. The KALRN gene doesn’t really turn on until adolescence.

“If you disrupt this signaling pathway in brain cells when we are young through TRIO mutations, we believe that this contributes to development of autism. This makes sense since autism-related symptoms appear in young children.”

But KALRN mutations disrupt this pathway during the teen years, a time when the brain is more developed, Herring said. “This makes sense because schizophrenia symptoms appear in adolescence.”

Herring’s group hopes that these new discoveries will be useful in developing new, more effective strategies for treating both autism spectrum disorders and schizophrenia.

The study is the result of a cross-disciplinary effort among Herring and USC chemists, molecular biologists and neuroscientists associated with the new USC Michelson Center for Convergent Bioscience. The center will open this fall.

The study was supported with funds from the Brain and Behavior Research Foundation and the Simons Foundation Autism Research Initiative. Twenty percent of the study — about $150,000 — was covered by a $1 million National Institutes of Health grant (MH103398) awarded to Herring in 2014.

Brain connectivity atlas assists in the understanding of mental and neural disorders.