For Cosette Rinab and Gabrielle Robinson, it was weird spending Monday so far away from home.

Both from Manhattan, the USC freshman and sophomore missed the camaraderie they feel at home with fellow New Yorkers on the anniversary of 9/11.

“The environment is always different on 9/11: New Yorkers are friendly, everyone is just hugging each other,” said Rinab, 18, whose godfather is a sergeant in the New York Police Department and was on duty on 9/11.

Monday was their first time being away from New York City during a 9/11 anniversary, a remembrance ingrained in them since they were very young.

“Growing up in the New York City public school system, every year we have a moment of silence at the time when the towers fell,” said Robinson, 19.

After seeing people carrying flags while they were walking on the University Park Campus, they stumbled upon Monday’s 9/11 memorial service in front of the Department of Public Safety’s office on McClintock Avenue. They heard remarks from Dean of Religious Life Varun Soni and Lt. Col. Olivia Nelson, the commanding officer of USC’s Air Force ROTC program, among others. 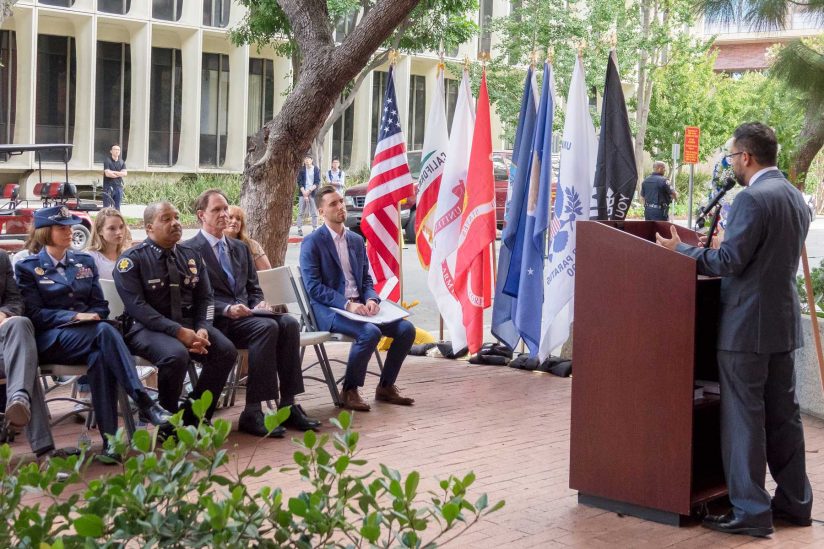 “I think out of respect, especially since New York is our home, it means a lot,” Robinson said of the memorial, adding that next year she hopes more students learn about the event and attend.

USC’s memorial service commemorated the 16th anniversary of the Sept. 11, 2001, attacks — the worst attack on American soil since World War II, which resulted in roughly 3,000 casualties.

In 2014, USC received a piece of steel from the Twin Towers; it’s on display in front of the DPS McClintock Avenue office. It’s one of only two such monuments in Los Angeles, according to DPS.

Many students — including Rinab and Robinson — were toddlers or younger on 9/11/2001. Soni, a UCLA law school student at the time, remembers the day vividly.

“I went to class that morning in a daze. Everyone was devastated on campus. Students were crying in the hallways. People were calling loved ones on the East Coast,” he said.

“My uncle worked at the World Trade Center and he happened to be late to work that morning.”

Soni felt mixed emotions after 9/11. While he felt patriotism as an American, he also felt the backlash on what it means to be American.

“As an immigrant, as a brown man with a beard in America and as someone with a family that includes Muslims and Sikhs, I also experienced a psychology dislocation,” he said. “In the weeks after 9/11, my family, my friends, neighbors and I experienced public discrimination, bias and name-calling in a way we never have before – especially those that wore turbans and hijabs.”

Soni was inspired by his friend’s documentary Divided We Fall, that showed a man get in a confrontation with a Sikh man, the angry man revealing his daughter died in 9/11 and the Sikh man confiding his daughter had died years ago as well – they both embrace. 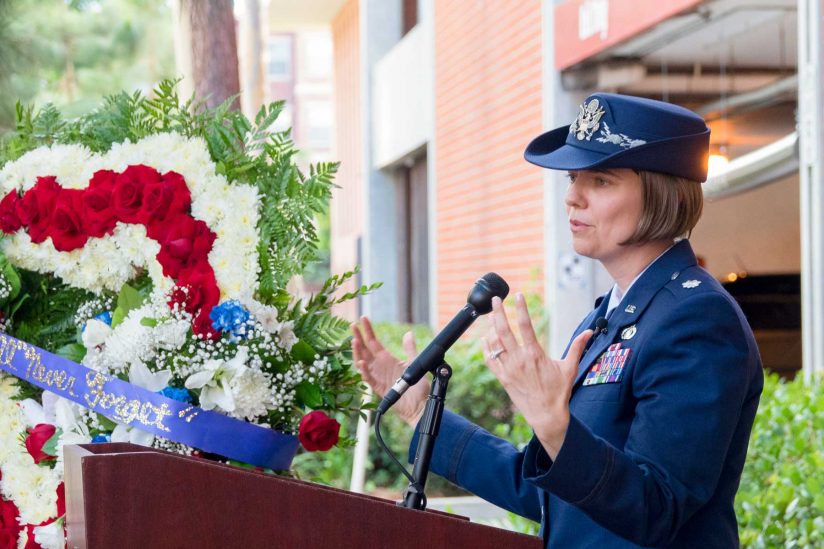 Lt. Col. Olivia Nelson speaks at the memorial ceremony. Nelson was planning her wedding when the attack happened, and was deployed to Iraq and Afghanistan afterward. (USC Photo/Deirdre Flanagan)

Lt. Col. Nelson will likely always link 9/11 and her wedding. On that fateful day, Nelson was sitting at her desk, at McGuire Air Force base in New Jersey, crafting wedding invitations.

“When the Twin Towers fell, we were the closest base to New York City,” she said. Within minutes she was put on alert.

For months afterward, Nelson would see bodies arriving from the Pentagon for DNA analysis on a daily basis. She’d see her boss, a two-star general, leave for an undisclosed location in Southeast Asia for an upcoming war. She and her boyfriend would marry and then be deployed to Iraq and Afghanistan. It’s an event that “defined my entire adult life,” she said.

For years, she bottled up the emotions associated with the day. It was too much. But about 10 years ago, she saw the film United 93, crying for the first time.

“I can still count the number of times I’ve given way to those feelings,” she said, tears in her eyes. “Today is the sixth.”

For Nelson, the response to 9/11 — by first responders and the community — showed what it meant to be American.

“That’s the heart of our national ethos: When others bring their very worst, we bring our very best,” she said.

Robinson, who was 3 1/2 years old, relies on her family for the memories of the day. Her dad was on his way to Brooklyn when he saw a plane going a little too low over the Brooklyn Bridge. Minutes later, he saw the news on the TV.

For her, it’s important that younger generations keep learning through stories of others to keep the spirit and the memory of 9/11 alive.

Visitors from 10 European countries exchange ideas on how to counter violent extremism.

Few veteran services focus on prevention of chronic conditions, such as unemployment and homelessness.