Before Cesar Jimenez Jr. takes off for a day of classes at USC, he and his wife, Teresa, go over the checklist.

“I make sure I have everything,” he said. “My computer is charged to 100 percent.”

For Jimenez, 50, starting his first year at USC is a big step.

He’s led a fulfilling life — a roughly 30-year career with both the U.S. Air Force and the Social Security Administration, two children and a loving wife.

But at the age of 42, Jimenez was injured during a deployment to Iraq — one of about a dozen total deployments — and it changed the future he had imagined for himself.

In December 2009, he was sent to Balad, dubbed “mortaritaville” by soldiers due to the ubiquity of small explosives.

We got bombed, shot at, almost every moment of every day.

“We got bombed, shot at, almost every moment of every day,” he said.

Although he went unconscious, he remembers most of what happened that night in April: He was loading a C-17 cargo plane in the dead of night when insurgents got in the area.

“They were firing at us and throwing mortars at us,” he said.

The airmen had lights hooked to generators while they worked, making it almost look like daylight. To the insurgents, they were spotlights. The soldiers were sitting ducks, he said. 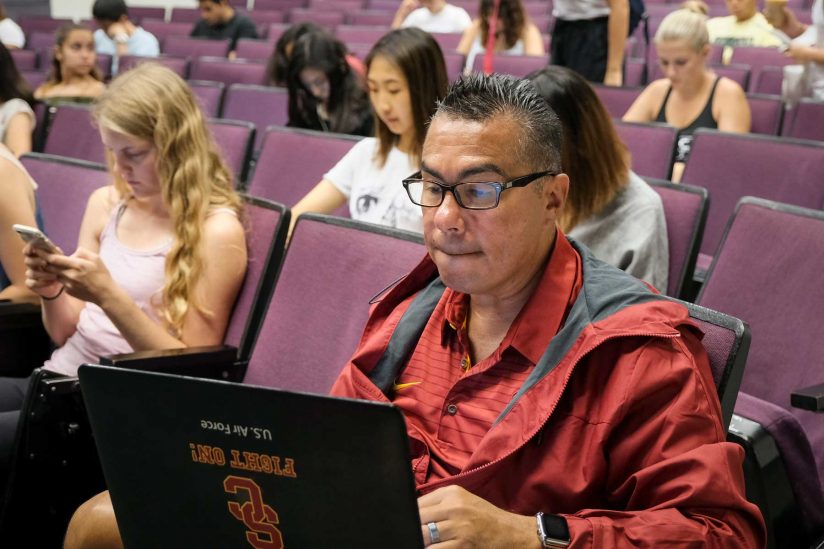 Jimenez blew out his shoulder. It took nearly two years to identify his traumatic brain injury, which left him with cognitive delays. He was depressed, and attempted suicide 10 times. He credits his wife for getting him a team of doctors and therapists that he meets multiple times a week — now fitting in those appointments around classes.

He met Teresa while working at the Social Security Administration. They were work pals, both divorcees with kids. They sometimes went to the movies together, but it was always platonic.

While he was away, they kept in touch. They sent emails. He walked three miles to the USO every morning — under fire the whole way — to call her before she went to bed. Sometimes they’d talk for hours.

“That’s what kept me alive,” he said.

When he came home, everything was different. He couldn’t go back to the job he loved.

He wanted to take care of Teresa; instead, she took care of him.

Together they learned about PTSD, therapy and rehabilitation. They dated for a year and then Jimenez had all the emails bound into a book, took her to a fancy dinner in Beverly Hills and asked her to marry him. They wed in 2011.

“She’s the only reason why I keep going,” he said.

A high school graduate and son of Mexican immigrants — his mother a saleswoman, his father a sheet metal worker — he thought academia passed him by. But one day, feeling the monotony of his unwanted retirement, he thought about nearby Pasadena City College.

Initially, it was hard. His last and worst suicide attempt derailed him for a year. But he got help and he got Baylee, his yellow Labrador service dog. She’s always at his side.

“She knows when I’m feeling depressed,” he said. “She senses it and she comes and lays with me by my feet.”

Jimenez’s service dog, Baylee, is with him at all times. (USC Photo/Gus Ruelas)

Jimenez ended up finishing his associate’s degree at Pasadena City College in two years, not missing a class or a semester over that time. He met veterans who had gotten into USC and heard it was a veteran-friendly school. It became the only school he applied to, and he’s now the first in his family to attend a four-year college.

He remembers when he found out he got in. It was a couple months ago, during a summer session course at Pasadena City College.

“I yelled out ‘I got accepted to USC!’” he said. “My professor, who wrote one of my letters of recommendation, stood up and went ‘Did you really get in?’ and everyone got up and clapped.”

He wants to go back to helping people, like he did filing claims for folks at the Social Security Administration. A sociology major, he wants to start his own business connecting low-income residents and veterans in South and East L.A. with government programs or benefits.

“I want to help people less fortunate,” he said.

A couple weeks into the semester, the busy campus and intense workload can be overwhelming, but he’s taking it all moment by moment.

Coping with the unexpected

When something unexpected happens, Jimenez can get anxious — like when a book he’s supposed to read isn’t on his computer.

His memory and involuntary decision-making were impacted, so he constantly checks his iPhone calendar to make sure he’s on track. A tutor, provided by the U.S. Department of Veterans Affairs, visits his house to help him with his studies.

His professors are supportive, one making special office hours for him. And having Baylee helps, letting him know things are going to be OK.

Even though it’s scary, it’s also tremendously rewarding, he said.

“I can bring my life experiences to the classroom. I’m probably older than my professors,” he said. “I can see that students are really listening to what I have to say. In a sense, I am making a difference in their lives.”

The first-time ceremony uses ashes to symbolize the visible wounds of battle — and the invisible sacrifices — made by men and women who serve their country.

The weeklong bootcamp prepares vets for an academically rigorous environment, and USC is the only California school that participates.

From the family that flew in from Japan to the first-generation graduate whose girlfriend had to work, there were plenty of stories to share Friday. Here are a few of them.

Iraq veteran brings life experience, and PTSD, to USC — and fights on