USC Trustee Gin D. Wong ’50, an architect credited with shaping the postwar landscape of Los Angeles, died Sept. 1 in Beverly Hills. He was 94.

As founder and chairman of Gin Wong Associates, Wong designed many Southern California landmarks, including the 33-story skyscraper at 1055 W. 7th St. (formerly known as the ARCO Tower), the expansion and modernization of CBS Television City and the Automobile Club of Southern California headquarters campus in Orange County. Visitors to Los Angeles International Airport drive along a two-level roadway system he designed as the executive architect of the airport’s 1984 expansion, which also included an upgrade of all terminal buildings. He was director of design development for the airport’s original design in the 1950s.

“Gin Wong was a visionary architect who left an indelible mark on our beloved alma mater and our vibrant Southern California landscape,” said USC President C. L. Max Nikias. “He was also an exemplary Trojan who was always looking forward to his next endeavor, his next challenge. As a trustee, he was deeply dedicated to advancing the university’s academic mission. He will be sorely missed.”

Born in Guangzhou, China, Wong was educated in Southern California and graduated from Los Angeles’ John H. Francis Polytechnic High School. He served in the Army Air Corps during World War II and participated in major air battles over Japan in 1945 as lead crew navigator/radar bombardier with the 20th Air Force. 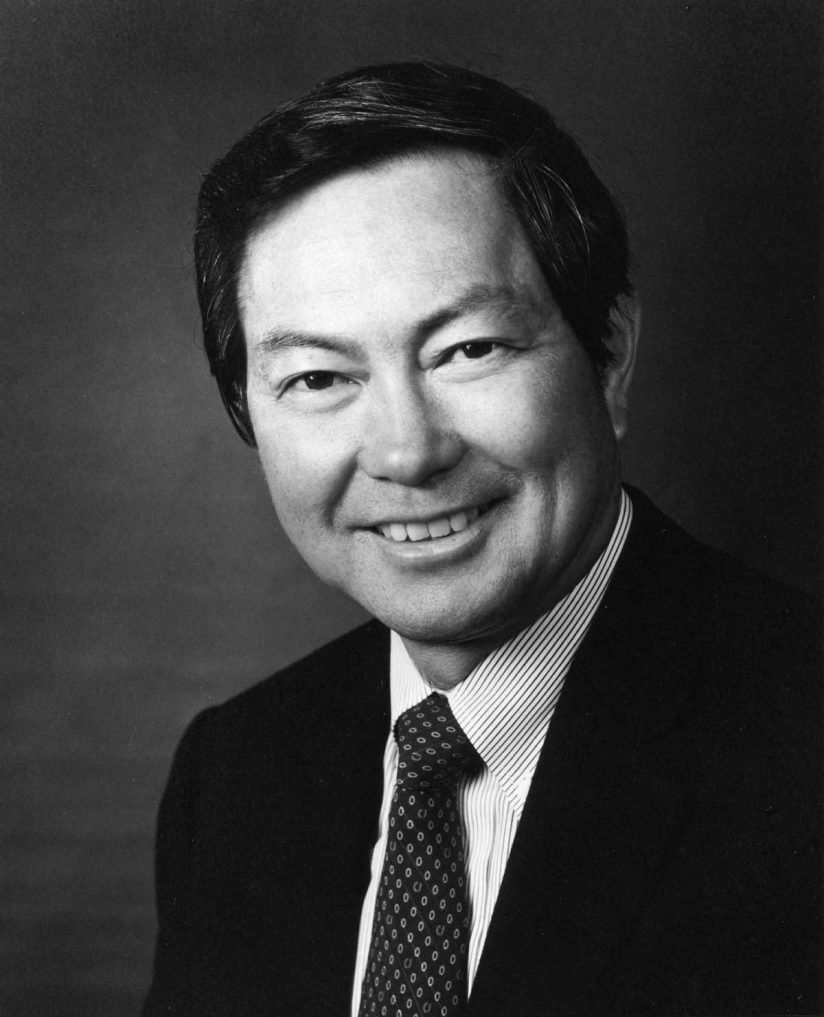 After the war, Wong earned his degree from the USC School of Architecture, where one of his professors was prolific architect William L. Pereira. After graduation, Wong joined Pereira’s firm, Pereira & Luckman. When that partnership disbanded in 1958, he helped found William L. Pereira & Associates, the architectural firm responsible for the 1961 master plan for the USC University Park Campus and USC buildings such as the Olin Hall of Engineering and Stauffer Hall of Science.

As director of design for Pereira, he was responsible for designing the Los Angeles County Museum of Art, the 32-story USC Tower at South Park Center at 1150 S. Olive St. (formerly known as the AT&T Center) and CBS Television City, all in Los Angeles. Wong also designed Marineland in Palos Verdes. He was president of the firm during the design of such landmark buildings as the Transamerica Pyramid in San Francisco and Union Oil Center (now Los Angeles Center Studios). His first professional design was the famous Unocal gas station at the corner of Santa Monica Boulevard and Crescent Drive in Beverly Hills, which recently received landmark status.

At the University Park Campus, Gin Wong Associates was responsible for a significant restoration of USC’s original building, which was rededicated as the Widney Alumni House following completion of the work in 1977.

Wong received numerous design awards from the American Institute of Architects and other professional associations, and he was one of the youngest architects to be advanced to fellowship in the field of design. In 2007, he received the Construction Industry Lifetime Achievement Award from the Los Angeles Area Chamber of Commerce, and he was honored with the Judge Ronald S.W. Lew Visionary Award at the Chinese American Museum’s 15th annual Historymakers Awards Banquet in 2011.

A member of the USC Board of Trustees since 1983, Wong’s service to USC included a term as president of the USC School of Architecture’s Architectural Guild. He received the USC Alumni Association’s Merit Award in 1986. His name is commemorated on the University Park Campus with the Gin D. Wong, FAIA Conference Center, a 175-seat auditorium that is part of the Harris Hall complex.

Memorial services will be private. In lieu of flowers, the family requests that funds be donated to the Gin Wong Scholarship at the USC School of Architecture. The scholarship supports promising fourth- and fifth-year architecture students based on academic excellence and financial need.

The veteran educator is at the forefront of architecture, urbanism and cultural theory.