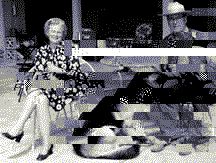 Julia Meyer with her late husband, Vincent, in a mid-1970s photo

On a summer afternoon in 1923, Julia Meyer, then eight years old and living in the Philippines, fell from the top branches of an acacia tree and broke her leg.

The injury caused her to contract osteomyelitis, a persistent and potentially life-threatening infection of the bone. As a result she spent the remainder of that summer in a Philippine hospital.

“If I hadn’t fallen out of the tree, I would have traveled with my family to Peking and we would have been on a Shanghai-to-Peking Express that was attacked by bandits. So I always thought it was a fair exchange,” Meyer said.

Meyer’s misfortune as a child now has another silver lining. Her resultant lifelong interest in seeing osteomyelitis eradicated recently prompted her to create the Vincent S. and Julia Meyer chair in orthopaedic surgery through a $1.2 million charitable lead trust.

Meyer, 82, was trained as a microbiologist and was in medical school when she met her husband, Vincent Meyer, who graduated from Stanford in 1939 with an M.D.

“I would have liked to have done research on osteomyelitis, but after I married, my life took a different direction,” said Meyer, who received a Ph.D. from Columbia University in 1942.

She said she still wanted to fight the disease so Meyer recently studied medical journals and performed computer searches to learn who was most active in research to eliminate it.

That search led her to USC and to Michael Patzakis, professor and chair of the Department of Orthopaedic Surgery, whose cutting-edge approach toward attacking the disease combines genetic and molecular engineering.

Patzakis, who was ultimately the recipient of the Meyer chair, said he felt honored to fill the position, adding that the trust will also fund a molecular biologist who will perform basic research.

“I’m extremely grateful to Mrs. Meyer for her generosity, kindness and warmth. She’s had this disease her entire life and she wants to do something to help others,” he said.

Patzakis said osteomyelitis can lead to severe complications and is potentially limb- and life-threatening.

The disease attacks bone tissue and cuts off its blood supply, which makes it hard to treat with antibiotics.

“Fortunately with modern techniques and treatments, we’re able to salvage extremities and minimize damage,” he said.

“We have a success rate of approximately 90 percent in arresting the infection.”

Patzakis emphasized that although doctors may keep the illness under control indefinitely, “we hate to say that we ‘cure’ it because it can always recur.”

Meyer said she is pleased to be able to help fight a disease that has shadowed her throughout her life. She added, “it fulfills a need that I have felt in my life to be able to make this kind of a contribution and it gives me a great deal of satisfaction.”