Jillian Ruvalcaba made her first film at the age of 10.

She and her friend filmed the stop-motion movie in her house using a Canon Powershot she got for Christmas. The film’s star was Barbie, her favorite character at the time.

It was then Ruvalcaba, now a freshman studying film and television production at USC, knew the magic of moviemaking.

“I was like, ‘You know, this is something I want to do for the rest of my life,’” she said.

In high school, she kept at it, saving up for a more sophisticated camera and making commercials for her school. She also got involved in theater. But most of her study of film happened at home, waiting patiently for Netflix DVDs to arrive in the mail for family movie nights.

When it came time to apply to schools, she was nervous about applying to the USC School of Cinematic Arts.

Not only did she get in, but she ended up receiving a Stamps Scholarship covering her tuition and other expenses.

“It’s unbelievable,” she said. “I still can’t believe it.”

Ruvalcaba thinks of her dad when she talks about getting into USC. Her father Jaime, a first-generation high school and college student and Trojan, was born to a family of 11 in Mexico and raised in California’s Central Valley. His youth was spent harvesting fruit in the fields. 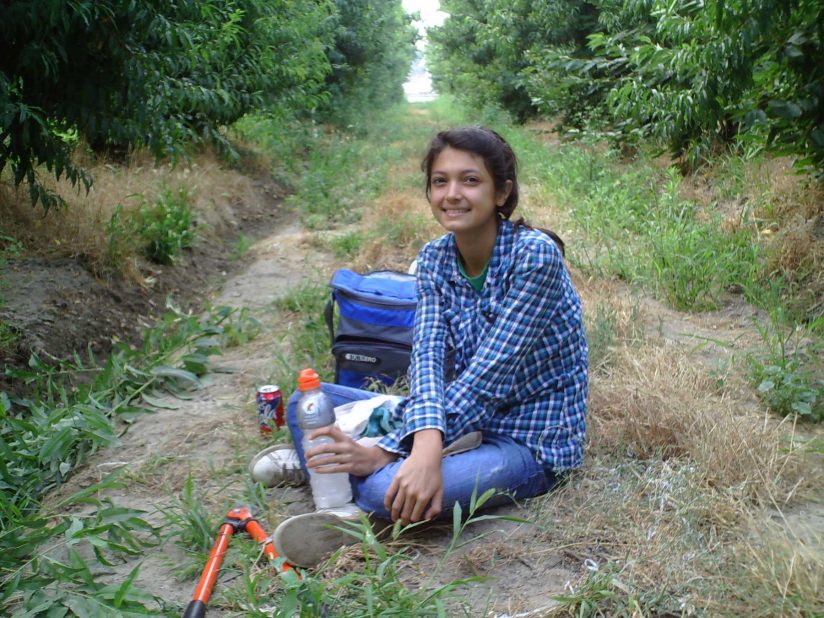 Jillian Ruvalcaba during a lunch break in Kingsburg in California’s Central Valley, where she spent time as a teen working on a farm with her father and other Mexican immigrants. (Photo/Courtesy of Jillian Ruvalcaba)

When she was a kid, her father joked he would one day take her and show her the life he had.

Turns out, he wasn’t joking. When she was 13, they packed up and spent a week on a farm, spending the night at her aunt’s home in Fresno.

“We would prune peaches from 6 in the morning till noon,” she said. “I used to cry every morning because we had to wake up at 4. The heat was unbearable and you’d be sore after just a few hours.”

A scrawny teen, she struggled to keep up with the workers, who ran laps around her.

“That changed me so much,” she said. “There’s so much to be grateful for.”

Unlike many others, Jaime Ruvalcaba didn’t drop out of high school, instead graduating and enlisting in the military, going on to be a lieutenant colonel in the U.S. Marine Corps. He was active duty until 2012. He has a bachelor’s degree in political science from Tufts University and master’s degrees from USC and Harvard University.

Growing up, he taught her Trojan pride.

“Every time they scored a touchdown or the marching band came on, he would put me on his shoulders and we would do the ‘fight on’ sign,” she said.

Ruvalcaba has enjoyed her first couple weeks at USC and she’s already diving into the world of cinema, watching Singin’ in the Rain for the first time and shooting a short documentary for a class.

Sometimes when she’s watching a TV show or movie, she’ll pause and pay attention to the music or how they transitioned a scene — which may offer a hint about her future career.

“I love editing films,” she said. “A lot of people want to be directors and producers, and that’s fine, but for me editing is when the magic happens.”

Freshman takes her love of moviemaking to another level