Philanthropist Frances Wu ’74, the first Chinese-American to receive a Doctor of Social Work from USC and founder of the Chinese-American Golden Age Association, died Aug. 11 in Monterey Park. She was 96. 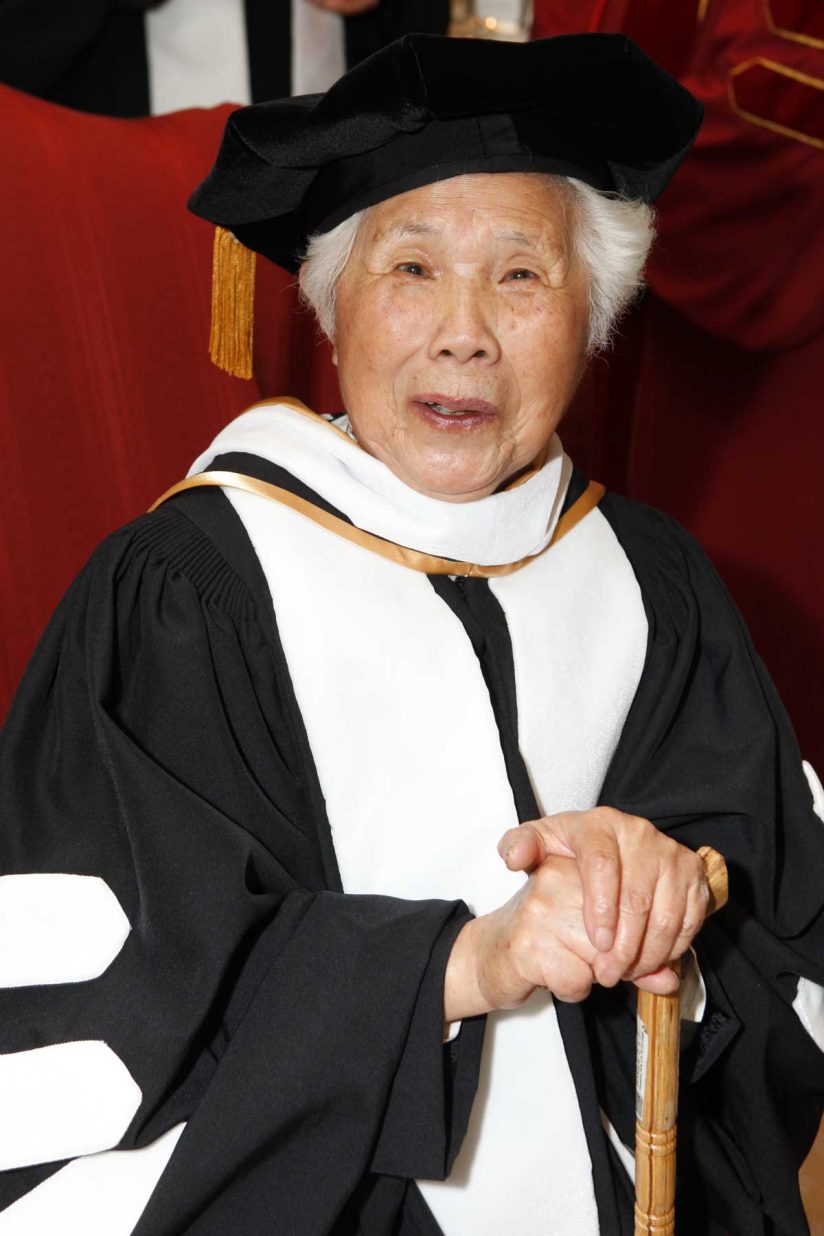 Frances Wu was an honorary degree recipient in 2009. (Photo/Steve Cohn)

For 15 years, she was a psychiatric social worker in New York, where she worked with children and as a field instructor for the Columbia University School of Social Work. During that time, she became aware of the plight of Chinese immigrants, especially those who did not speak English or drive.

Determined to make a positive difference in their lives, she decided to switch her focus from children to older adults. She moved to Los Angeles to study aging and administration and became the first Chinese-American to receive a DSW from USC in 1974.

After graduating from USC, Wu dedicated herself to developing the resources needed to build a residential facility for older Chinese-Americans. With the help of the USC Andrus Gerontology Center, which co-sponsored the project, she applied successfully for a Department of Housing and Urban Development grant to build Golden Age Village, which opened in 1980 in Monterey Park. The apartment complex for the low-income elderly population opened with 400 names on the waiting list.

She leaves behind a lasting legacy at the Golden Age Village, where she fulfilled her dreams of creating a safe place for immigrant seniors to live well and age in place.

“Dr. Wu was truly loved by many of the Golden Age residents, who not only became dear friends but also family,” said May Ross, a grant developer with the USC Roybal Institute on Aging who serves on the board of directors of the Golden Age Village.

“She leaves behind a lasting legacy at the Golden Age Village, where she fulfilled her dreams of creating a safe place for immigrant seniors to live well and age in place. Her presence will be greatly missed.”

A style all her own

She designed the latter herself in a distinctly Chinese style, with bright-colored balconies overlooking serene courtyards featuring a small pond with fountains or waterfalls and a bright red arched bridge. The complex received five superior ratings from HUD and a beautification award from the city of Monterey Park.

“Frances Wu was an outstanding example of courage, assertiveness and commitment in all that she did,” said Marilyn Flynn, dean of the USC Suzanne Dworak-Peck School of Social Work. “Imagine convincing HUD to build a koi pond and curved roofs for the Golden Age facility! She did, and much more, at a time when there continued to be little understanding of the cultural needs for this population. I hope we will be able to preserve her spirit in our school through the California Social Welfare Archives.”

Wu also guided numerous boards that advance the public good. These include the Asian Pacific Coalition on Aging, the Planning Committee of the Los Angeles Chinatown Redevelopment Project and the Monterey Park Commission on Aging, which she chaired.

Among her many honors are Monterey Park’s Woman of the Year Award, The East Los Angeles Community Union Women’s Achievement Award, the American Legion Citation for Meritorious Service and the Chinese-American Women’s Outstanding Achievement in Humanitarian Services Award. She also received the George D. Nickel Award from the California Social Welfare Archives, the Dean’s Award for Outstanding Community Service from the USC Suzanne Dworak-Peck School of Social Work and an honorary Doctor of Humane Letters from USC.

“Under her leadership, as the vice president and secretary on the Golden Age Village board of directors since 2004, I valued her ability to make her dream a reality: to create a beautiful, safe home for low-income seniors in Monterey Park,” said Carrie Lew, an associate dean at the USC Suzanne Dworak-Peck School of Social Work who directs its DSW program. “She was a tenacious woman. We will greatly miss her passion and zest for life.”

Lesley Adams Williams sees a future where teens have a safe place to go when home isn’t an option.

Ben Henwood is among nine professors to accept the challenge.

Philanthropists Ann Thor and Frances Wu were honored Oct. 21 by the California Social Welfare Archives for their lifelong commitment to improving social services.

Fifteen students from the USC School of Social Work traveled to China over the summer to learn how a nation that reveres its elders is taking care of its graying population.