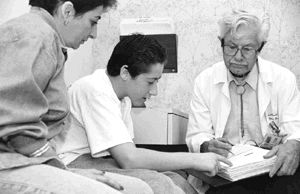 Richard Koch, professor of pediatrics at Children’s Hospital Los Angeles, counsels a patient, 14-year-old Harotyn Adzhyan, on the restrictions of the PKU-free diet he must stay on in order to remain healthy. Harotyn and his mother Srbui Adzhyan of Van Nuys, have been coming to CHLA since 1988.

In 1953, when James Watson and Francis Crick described the structure of DNA, Richard Koch was a resident at Childrens Hospital Los Angeles, looking forward to a career in child development.

Now a professor of clinical pediatrics, Koch has devoted his career to the treatment of a genetic disorder identified in those first days of DNA.

He studies a hereditary condition called phenylketonuria, or PKU. PKU results when the body fails to make an enzyme responsible for metabolizing an amino acid called phenylalanine. In PKU patients, phenylalanine builds to dangerous levels, causing mental retardation and other developmental disorders.

Understanding that children with PKU would need a diet free from phenylalanine, in 1953 Childrens Hospital chemists cooked up a mixture of “safe” food. “It was God awful,” said Koch. “I wouldn’ t eat it myself.” As terrible as it tasted, the diet worked, and children who stuck to phenylalanine-free food grew up largely healthy.

Koch lobbied for some of the first mandatory screening programs in the country, urging state legislatures to require a PKU test for every newborn.

Now, all children born in the United States yield a few drops of blood to the screening. With widespread testing and a safe diet commercially available after 1957, it seemed as if PKU had been beaten. Screening programs identified children with the disease, and the diet guaranteed normal development.

Most children, depending on the severity of their condition, stopped using the diet when they started school, after their brains had almost fully developed.

In the early 1980s, though, researchers began to suspect that the diet might be important even after childhood. A study comparing pregnancies of women who had gone off the special diet with women who resumed dieting during pregnancy led to some shocking revelations.

Children born of phenylketonoric mothers who did not use the diet during pregnancy were more likely to be born with mental retardation, microcephaly or congenital heart disease.

“Once we saw the trend, it took a little while to come to grips with what it meant,” Koch said.

Thousands of patients might not realize the benefits of the diet before becoming pregnant. Many of them – now in their early 20s – might have originally stopped the PKU-free diet at such a young age that they don’ t remember being on it.

Nationwide, Koch estimates, 3,000 to 5,000 women have been lost to follow-up programs. And he’ s hoping to find as many of them as possible, urging them to resume the diet before having children of their own.

More recent evidence suggests that many people with PKU – men and women alike – could benefit from remaining on the diet indefinitely.

Yet, said Koch, it’ s difficult to convince someone to remain on the costly regimen for years on end. The long-term effects of remaining on the diet are difficult to assess, since the oldest PKU patients are now in their early 30s.

Twice a week, Koch rides his bicycle down Sunset Boulevard to Childrens Hospital, and spends the day in a cramped sixth-floor office visiting with some of those older patients.

Last week he visited with a 23-year-old woman who has been in his care since she was born. Even though her genes produce virtually none of the crucial enzyme, she has developed normally over the last two decades.

“She’ s editor of her college newspaper,” Koch said with a small hint of pride.

Before the woman and her family left the clinic, they made sure to snap a photo with the 74-year-old physician, and to make an appointment for a year from now.