Kwok “Chris” Im surprised himself with an answer he gave during a mock interview at Bridging the Gaps, a summer internship program at the Keck School of Medicine of USC.

The question: “If there was any one person you could sit down and spend time to talk to that inspires you to be a scientist, who would that person be?”

At the time, his grandfather was still alive. But he was suffering from advanced Alzheimer’s disease.

“I had such a good person supporting me when I was younger,” Im said, remembering the grandfather who raised him. “He barely spoke any English, yet his unconditional love to take care of me was universal … He didn’t care what I did as long as I was happy.”

Now a third-year PhD student in the USC Neuroscience Graduate Program, Im studies Alzheimer’s and immunotherapeutics, which use the immune system to fight disease. Conducted in the lab of Terrence Town, the research could help inform future therapeutic treatments for Alzheimer’s. That research is also the subject of Im’s dissertation.

From Hong Kong to Texas to L.A.

Born in Hong Kong, Im came to the United States with his family when he was barely a year old.

“Both my parents had to take on multiple jobs,” he said. “Neither of them had an opportunity for higher education due to constant financial obligations.”

What the family did have was a belief in education, and a spirit of optimism. 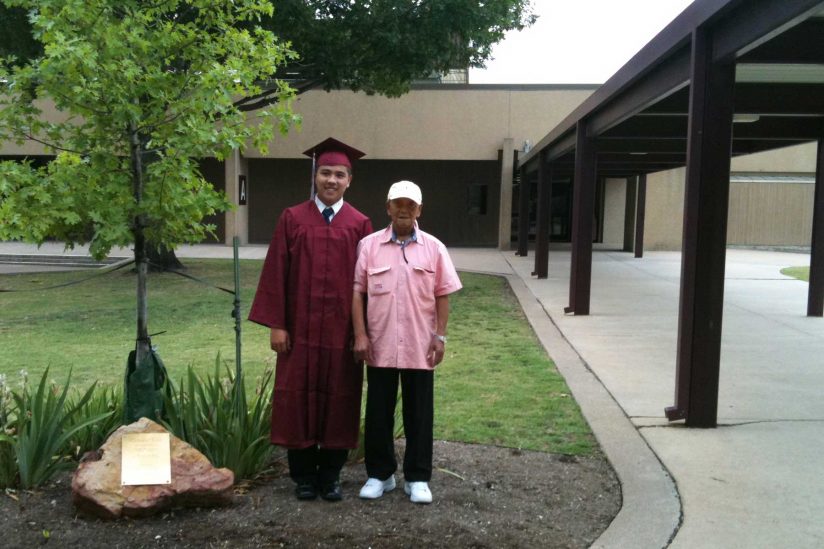 “My grandfather said in Cantonese, ‘You can do anything you want to. This is the land of opportunity.’”

Im found a life-changing opportunity three years ago while earning a bachelor’s degree in neuroscience at the University of Texas. During a summer break, he earned a spot at USC’s Bridging the Gaps program. It pairs underrepresented minority students with graduate student and faculty mentors for eight weeks of clinical research at the Keck School of Medicine. All expenses, including travel and housing, are paid.

“Chris amazed me from day one during his summer session,” said Joyce Richey, associate dean of diversity and inclusion and associate professor in clinical physiology and neuroscience. “His excitement about biomedical research was then and continues to be unparalleled to any student who has participated in the program.”

During his short tenure at USC as a PhD candidate, she added, he has proven his dedication and commitment to science through his research studies in Alzheimer’s disease and pediatric brain cancers.

Drug nanotech and a biotech startup

Im is also involved in collaborative research on a biotech-based approach to pediatric brain cancer, using nanotech approaches to target tumor cells without toxic side effects. Preliminary data from that research is being used for a biotech startup that could launch in the next couple of years.

The research essentially seeks to expose cancer cells to the immune system, which could then destroy them.

“Cancer cells send off chemicals that trick the body, sending false signals that say ‘I’m not dangerous,’” Im explained. “That prevents the body from activating an immune response that would usually eliminate these cancer cells.”

Tiny “nanopills” can be engineered to deliver drugs to the immune system so it could sniff out the tricky cancer cells. In a form of immunotherapy, the body’s own immune response could then proceed to destroy the cancer cells.

That goal, however, may be tough to achieve. The brain is one part of the body where it’s hard for drugs to penetrate and be therapeutically effective.

“The brain is very protected and tightly regulated by the blood-brain barrier. Large particles can’t get in, but nanopills can be engineered to overcome this problem,” Im said. “A significant benefit to these nanopills is that they are non-toxic and biodegradable, so they get flushed out of the body when they’re done with their job.”

This nanotech approach is engineered to deploy therapeutic drugs only if they find their target, preventing unnecessary side effects.

An opportunity to be discovered

This year, Im returned to the program that started him on his journey to the Keck School, leading a research seminar for 18 students in the 2017 Bridging the Gaps cohort. As he shares his passion for immunotherapeutics and the potential for treating brain diseases, Im reflected on his journey to USC.

“I study what I study because I want to ultimately lessen human suffering,” he said. “Perhaps if I can help others, like my grandfather, to overcome neurological disorders, they could spend more time with their loved ones. That’s why I’m here. I’m always super grateful to Dr. Richey and the program that gave me a chance to be found, and begin doing what I love to do every day.”

Through crowdsourcing, researchers at the Keck School of Medicine of USC have aggregated some of the largest brain scan data sets for certain neurological and psychiatric disorders.

The researcher explains five things to know about the only disease among the top 10 in America that cannot be prevented, cured or slowed.