Six-hundred-foot waves crashed down on the coasts of Taan Fiord, Alaska after a massive landslide sent more than 100 million tons of rocks into the water on Oct. 17, 2015.

The event was caused by rapid glacier retreat, an indirect effect of climate change that is increasing natural hazards near glaciated mountain coastlines in locations like Norway and Greenland. The 2015 incident was the highest marine tsunami worldwide since 1958.

Icy Bay, the home to Taan Fiord, fortunately is uninhabited and no one was in the area at the time of the event. And when the rocks came hurtling down, creating waves as high as the Space Needle, no one even noticed until a seismometer picked up the signal hours after the event. However, in at-risk locations with higher populations, an event like this could be catastrophic.

“Local climate changes in that area [of Alaska] caused the supply of snow and ice feeding that glacier to be reduced so that it retreated back quickly,” said Patrick Lynett, an associate professor in the Sonny Astani Department of Civil and Environmental Engineering at the USC Viterbi School of Engineering. “There are a handful of locations throughout the world that have this situation. There are many places in Alaska, particularly southeast Alaska, many in South America and in Northern Europe.” 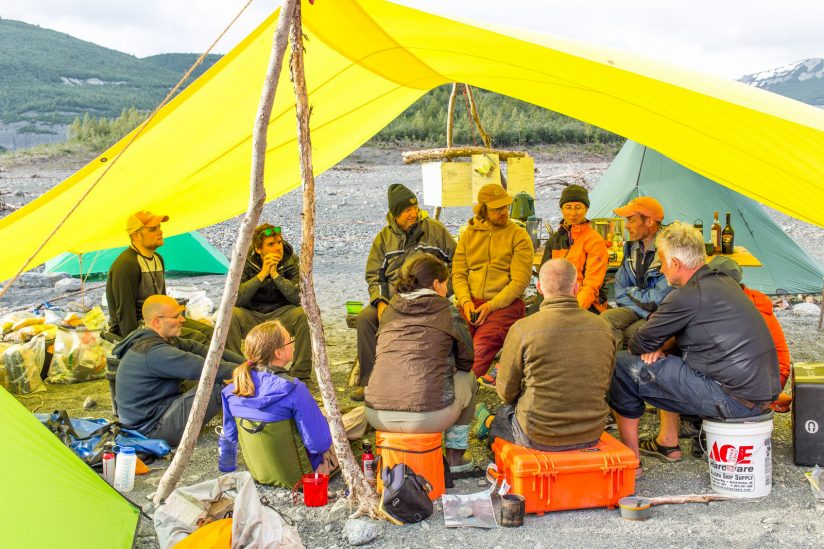 With funding from the National Science Foundation, Lynett was part of a group of scientists from around the world who traveled to the fiord just months after the tsunami occurred. Over the summer, they studied its aftermath, like debris washed up on shore or buried in the ocean. From their forensic-like investigation, they were able to recreate the tsunami and uncover details of the event.

In addition to determining characteristics like the speed of the waves and how far inland the water went, the team also looked at past digital elevation models of the surrounding area to look for any signs of oncoming failure. They were able to determine that gradual downslope motion continued up until the failure in October 2015.

Lynett believes that this is evidence of the need for GPS motion sensors. Such devices could detect accelerating movement along potential landslide areas, creating a warning system to protect locals.

“Our main goal, as we try to disseminate this information, is to get communities to recognize that the hazard exists and that it needs to be monitored,” he said. “Researchers have to get onto these slopes and install instrumentation that tells the local communities if and when the hillsides are going to slide.”

Channels like Taan Fiord are created by glaciers carving into the land. When the ice retreats very quickly, steep, unstable slopes are exposed and at risk of collapsing from even a minor shake in the earth.

“That’s exactly what happened here,” Lynett said. “The rapid deglaciation of that fiord removed the ice that was supporting the bases of these very weak, unstable slopes. With the base support gone, the slope failed and caused a huge landslide, and that landslide caused a huge tsunami.”

As a member of the USC Tsunami Research Center, Lynett plans to apply his findings closer to home. For years, he’s worked with state agencies like the California Geologic Survey and the California Governor’s Office of Emergency Services to create hazard maps for harbors along the central and southern California coast.

Here, in Santa Monica Bay, there may be offshore landslides which bring waves on the order of 10 to 20 feet. You don’t want to wait for it to happen to study it.

“Here, in Santa Monica Bay, there may be offshore landslides which bring waves on the order of 10 to 20 feet. You don’t want to wait for it to happen to study it,” Lynett said. “In Taan, since we have a huge wave that’s over 600 feet right near the landslide and decreasing as it moves away, then there’s somewhere where the tsunami is 20 feet. And so Taan offers a unique opportunity to see a wide continuum of different sizes of waves and the impacts that they have on the beach.”

In his research, Lynett uses data from past events to create computer models that can predict at-risk locations along the coast. Using field data, he’s able to create large-scale models at the Oregon State University’s tsunami wave facility in order to closely study wave phenomena like tsunami flooding through towns and the generation of whirlpools in ports. He then applies these findings to computer models, simulating tsunami events at real world locations to determine at-risk areas and the likely level of damages.

While Southern California has yet to experience a large-sized tsunami, small ones happen fairly often and harbors are the most vulnerable locations. With thousands of high-end boats and yachts lining the slips, even a small harbor can accrue hundreds of millions of dollars in damages.

“There’s a lot of funding and effort that goes into basic research.” Lynett said. “We as engineers have a responsibility to find some way to translate that basic research into application.”

USC to team on gerontology course with Israel, home of the ‘silver tsunami’

Students can explore the topic in a country where young people are being outnumbered by the elderly.

New study is inspired by a 2010 survey showing that villages in the shadow of small islets suffered some of the strongest tsunami impacts.

The earthquake zones off of certain coasts — such as those of Japan and Java, Indonesia — make them especially vulnerable to tsunamis, according to a new study.

On the one-year anniversary of the devastating Japanese tsunami, engineers from the USC Viterbi School of Engineering Tsunami Research Center are working with the state of California to better understand the damaging currents caused by tsunamis.