Rebecca Stimson is rummaging through a cardboard box, surrounded by dozens of other cardboard boxes, in search of something. 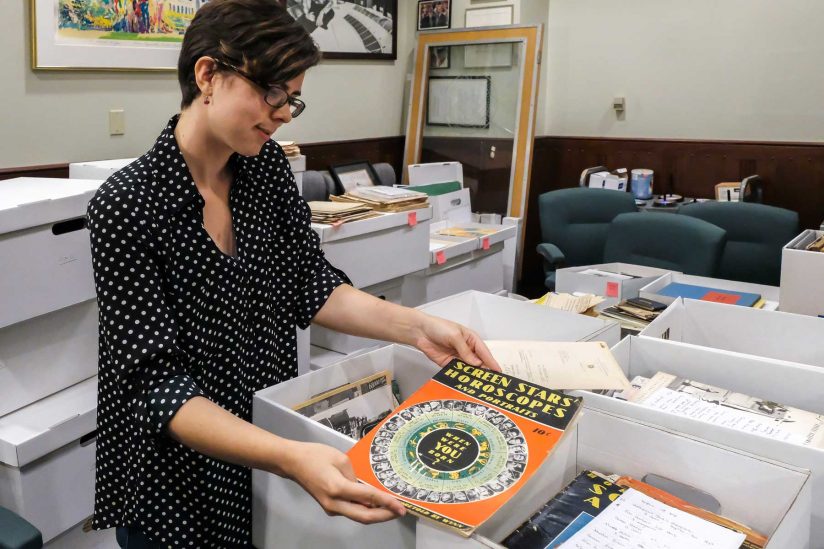 There it is. She pulls out a 1934 magazine titled Screen Stars Horoscopes and Portraits. It’s bright red with a big dial on the front, showing signs of the zodiac along with black-and-white photos of celebrities of the day.

“I think it’s just so much fun,” she said, flipping to the page that shows the zodiac sign Cancer. “Ah yes, John Gilbert is a Cancer. If you’re a Cancer, have you thought about how you’re like John Gilbert?,” a silent film actor who was a big name during the 1920s.

Stuff like this — tabloids, paparazzi shots and film memorabilia, all from the early days of cinema — is hard to come by because it was often tossed in the day’s trash.

Stimson, a second-year master’s candidate in the USC School of Cinematic Arts, is learning the art of archiving thanks to the school’s new certificate in archive studies. It’s a yearlong program, half focused on paper archives and half on film and technology.

Tucked in the basement of USC’s Doheny Memorial Library is where some exciting bits of Hollywood’s history are housed. There are memos from Bette Davis and Mel Gibson’s sword in Braveheart. Four-hundred collections, many from big names such as George Lucas and Hugh Hefner. But there are also important finds from lesser-known folks, including producers, supervisors and writers.

Back in the day

Sandra Garcia-Myers, who oversees the paper items, said some of their studio collection — such as the Warner Bros. Collection — is important because it gives such an accurate glimpse of how a studio worked back in the day, information that’s valuable to present-day filmmakers, historians and scholars. There are documents spanning decades, including production notes, scripts — even memos to studio head Jack Warner.

“Say Casablanca disappeared. You could look at these (documents) — you’d get the beginning to the end of the making of the film,” she said. 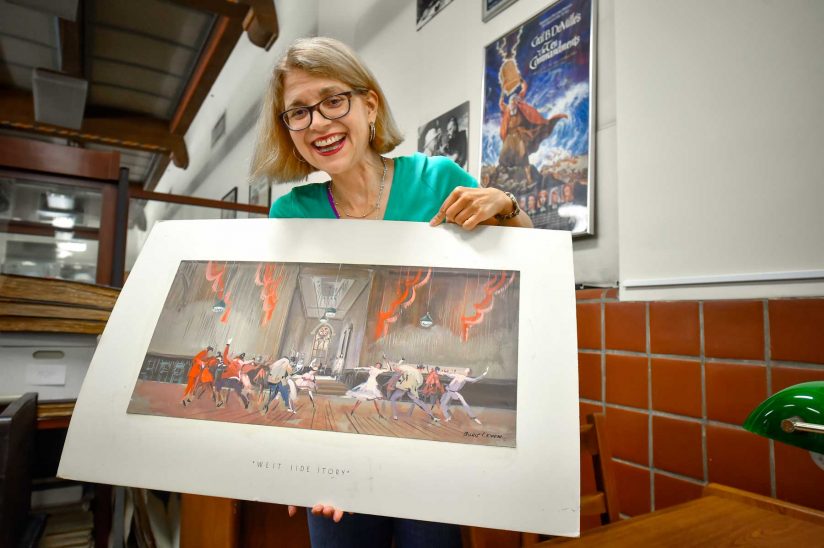 Sandra Garcia-Myers holds a storyboard from the West Side Story production. Garcia-Myers co-teaches the classes in archiving. (Photo/Gus Ruelas)

One of her favorite examples is the archive’s collection from the 1961 film West Side Story, starring Natalie Wood. There’s a hand-painted storyboard, the script supervisor’s script (it looks more like a scrapbook) and perhaps the most tantalizing bit: the casting notes.

“Anyone who was anyone at this time auditioned for West Side Story,” Myers said.

A name jumps out on the yellowed page: a 22-year-old Jack Nicholson auditioning for a role. It’s noted he has “slow speech” and had done some “matinee theater.”

The perpetually tan George Hamilton also tried out. “Too dark for us” was the comment.

The documents offer a behind-the-scenes look that we rarely get, and Myers said that’s what made her fall in love with archiving.

Stimson is getting a head start on the program, which requires two internships, by interning alongside Myers during the summer. Those cardboard boxes are all thanks to a local collector, in his 80s, who got a lot of his items from his odd jobs in show business, asking folks on sets and at studios if he could keep stuff they were going to throw away. And sometimes he grabbed stuff after it was tossed, too.

“Literally, the guy who found it was a dumpster diver,” Stimson said.

The other half of the year will be led by Dino Everett, the archivist who oversees film and technology. Students will learn how technology has changed over the decades and how complicated that makes cleaning up and restoring old film.

“There would be all these things that would be used. … You’d have the negative, A and B rolls, and you could have a fine grain, a master positive or an inter-negative,” he said. “Students no longer know what that stuff is. Now I just shoot my footage and move it over here and then I work with it.”

Students will learn how life was before digital production, when you spliced things together and couldn’t just Ctrl+z yourself out of an error.

“We have to figure out how to teach other people these skills or else, in the future, they’re going to pick something up and go ‘What do we do with this?’” he said.

Myers believes the certificate — aimed at critical studies students, but open to everyone — is one of the first of its kind in a film school.

The certificate is in response to a shift in the application of a critical studies degree, said Myers, who has a master’s and PhD in critical studies. It used to be that critical studies students were pushed into academia. But demand is dwindling while the digitization of archives, which will make archives like SCA’s valuable to scholars, filmmakers and students around the globe — is paving a new career path, she said.

We have tons and tons of stuff that could be reintroduced to the world.

“We have the oldest film school (in the U.S.), which just means we have tons and tons of stuff that could be reintroduced to the world,” Everett added.

Sifting through the boxes that sat in an L.A. apartment for decades, Stimson has found some cool stuff — like photos of the Marx Brothers getting their star on the Hollywood Walk of Fame, telegrams from talent agent Paul Kohner (who managed the likes of Greta Garbo and Marlene Dietrich) and old tabloids that promise “the lowdown on Ava Gardner.”

Pulling and sorting all the items, it’s possible she’s one of only a few people to ever see some of them.

“We had all these hidden gems,” Stimson said. “It’s been a blast to just discover things you wouldn’t expect.”

An appraiser came in recently and paused on a photo sticking out of a box — an image of silent film star Alice Howell.

He needed to take a moment, Stimson said. He had written a book on her and had never seen the photo before.

A funny story about Funny Girl and other Hollywood history

The USC School of Cinematic Arts honors Ray Stark, the producer of such hit films as West Side Story, The Goodbye Girl and Annie.