When I started my first job after graduate school, I knew I’d face a few new situations. But I hardly expected to find myself strapped to a table inside a massive magnet.

Luckily, I was supervised by a team of experts when I entered the 7T Terra Magnetic Resonance Imaging brain scanner, which was installed at the USC Mary and Mark Stevens Neuroimaging and Informatics Institute in February.

The scanner, the first of its kind in North America, contains a magnet so powerful it’s considered “ultra-high field.” Compared with standard MRI machines, it produces clearer, more detailed images of the human brain.

As my appointment approached, I felt increasingly apprehensive, especially after several colleagues lauded my bravery for agreeing to enter the 7T — which has double the magnetic field strength of a typical MRI machine — for my first brain scan.

I slipped through a heavy wooden door, trying to ignore the warning labels plastered across it, and into a sleek room where nearly everything was white. Things improved after I removed all of my metal objects: A kindly technician whisked me onto a table and tucked me in with blankets and a cushy head rest.

She began wheeling me in, and a wave of dizziness swept over me, then subsided, as I rolled through the giant magnet. Once the scan started, I spent 20 pensive minutes trying to decide what images the mechanical noises evoked.

The sounds were essentially a cross between a Super Mario Bros. funeral, an alien orchestra and wounded dolphins talking to each other. Though this might sound annoying, the bangs and clunks became strangely soothing. Halfway through the scan, I drifted into a peaceful mid-workday nap.

Meanwhile, there was plenty of action taking place inside my brain.

When I entered the scanner, the protons in my brain’s hydrogen atoms aligned themselves along the machine’s magnetic field. I had become “magnetized.” 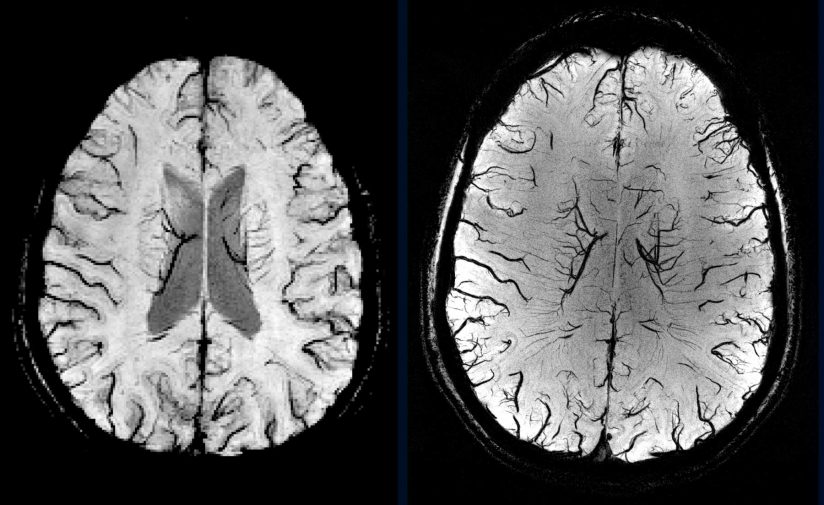 The researchers then applied a series of electromagnetic pulses, disrupting the alignment of my protons. After each pulse was applied, it quickly “decayed,” and my protons returned to their original magnetized state. But different body tissues have different rates of decay, meaning that some protons will remain misaligned longer than others. By measuring those differences, the researchers formed an image of my brain.

A day later, I repeated the process in the institute’s more standard 3T MRI scanner, feeling much less nervous. From my perspective, the only difference between the two machines was that each had a distinct type of banging. As strange as it may sound, I liked the 7T banging better. It sounded more expensive.

But to the neuroimaging experts at the institute, the 7T’s new banging makes all the difference. The stronger magnet improves the signal-to-noise ratio of the scanner, providing much better spatial resolution. They took the data obtained during my scans, worked their magic and out came a series of spellbinding images.

It doesn’t take a scientist to see the greatly improved resolution the new scanner affords. This means USC researchers can look more closely at healthy brains across the lifespan, forming a better picture of what goes wrong in patients with neurological diseases.

With a typical 3 Tesla scanner, each cubic unit of the image or “voxel” represents about 50,000 brain cells. At 7 Tesla, each voxel depicts just a few thousand cells.

“It’s really a dramatic improvement,” Danny Wang, a neurology professor at the institute’s Center for Image Acquisition, told me. “Ideally, we want to look at the smallest group of neurons possible so we can start to pinpoint what’s happening at the cellular level.”

The greatly improved resolution makes the 7T scanner ideal for certain types of imaging studies. For examples, researchers can better visualize problematic structures such as the hippocampus, key for memory and spatial navigation.

Another timely application of the new technology is in vascular imaging. The new scanner can capture blood vessels in superb detail, which may help scientists understand conditions such as vascular dementia and stroke.

Neurodegenerative diseases, including Alzheimer’s and Parkinson’s, are also targets for further exploration — the 7T is highly sensitive to iron deposition, a hallmark of these disorders.

Right now, USC researchers are working on a study comparing the new scanner with the standard 3T machine. The results will help quantify the increased potential of the new technology so that researchers can better understand its applications.

“We’re excited to add the 7T to the institute’s arsenal of sophisticated instruments,” said USC Provost Professor Arthur W. Toga, director of the institute. “This technology will lead to more discoveries, ultimately helping us ease the suffering of patients with neurological disorders.”

After exiting the scanner, I was told that I have a “textbook” brain. Nothing is missing, lopsided or covered in cobwebs.

I was relieved to hear it.

A study of protein interactions could be the first step to finding treatments that focus on problematic pathways, USC researcher says.

Why dementia-causing plaques become trapped in the brain

USC researchers plan to explore whether constricted vessels could be targeted by existing drugs that were approved for treating other health conditions.

USC researcher uses sophisticated techniques to understand the effects of such injuries among older adults.