The Exxon Valdez oil tanker strikes a reef in Prince William Sound in 1989, releasing 11 million gallons of crude oil into the environment. A storm blows in soon after, spreading the oil over more than 1,000 miles of coastline.

About one year later, a USC professor publishes studies on the health, well-being and sustainability of the communities affected in southwest Alaska. The findings of Lawrence Palinkas, the Albert G. and Frances Lomas Feldman Professor of Social Policy and Health at the USC Suzanne Dworak-Peck School of Social Work, stress the social and psychological issues, which include increased rates of mental health problems such as post-traumatic stress disorder, depression and domestic violence.

Fast forward to 2010. An explosion on the Deepwater Horizon oil rig releases more than 2 billion gallons of oil into the Gulf of Mexico over three months, polluting an estimated 1,100 miles of shoreline across four states.

Palinkas is called in by the National Institutes of Health to share what he had learned from the Exxon Valdez spill. Very little research had been done up to that point to compare the similarities or differences of a man-made disaster to a natural disaster, and the Gulf community was only just recovering from the devastation of Hurricane Katrina in 2005.

He is asked to write a report, which gave him a chance to formally organize his thoughts on the three tiers of social impact relating to environmental change. The report would eventually become the basis for what is now one of the American Academy of Social Work & Social Welfare’s Grand Challenge initiatives for the profession: Strengthening the Social Response to the Human Impacts of Environmental Change.

Palinkas is leading the national challenge with Susan P. Kemp of the University of Washington. 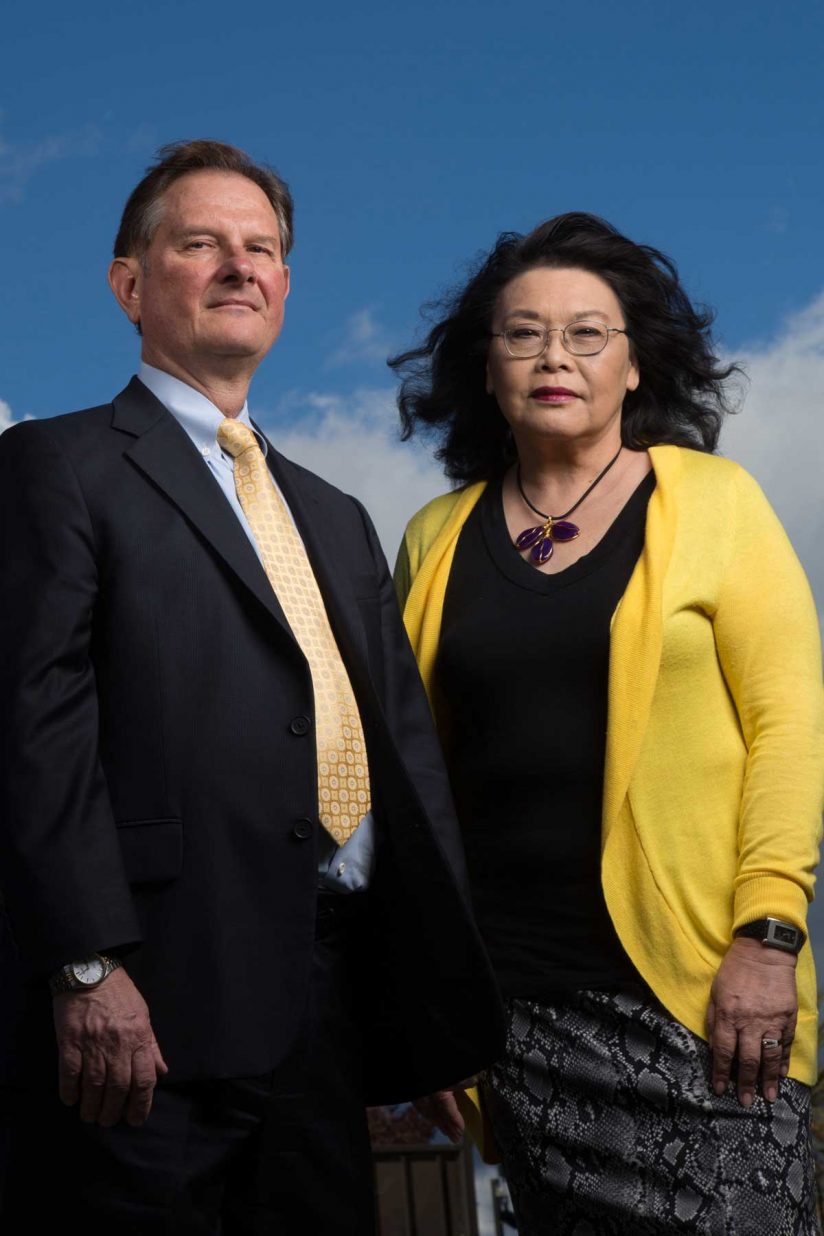 Lawrence Palinkas and Marleen Wong are tackling the Grand Challenge of a social response to environmental change. (Photo/Tracy + David Stills and Motion)

The conceptual model Palinkas proposes can be applied to disaster preparedness and response for both natural and man-made disasters, as well as to issues of escalating urbanization and population displacement:

Biopsychosocial impacts, the direct consequences of damage to the physical environment, constitute tier one.

Tier two focuses on interpersonal impact, which includes the reduction of social support and increase in social conflict and uncertainty.

“The linchpin to all of this is really the second tier because it is the destruction of the community and the social bonds that bring a community together that is most critical,” Palinkas said. “So the model is really designed to play upon the strengths of social workers by focusing on the social dimensions of these kinds of events, but also to engage social workers at all three levels: macro, mezzo and micro. You cannot solve this problem by just targeting one.”

For example, planning for the impacts of disasters or an influx of refugees on delivery of services would be a tier-one response. Training people in how to deal with community conflict or how to provide timely information to communicate risk would be tier two. Providing evidence-based practices for treatment of trauma, depression or substance abuse is tier three.

Focusing on the vulnerable

Changes relating to environmental racism, deterioration of infrastructure, rural to urban relocation and refugees forced from their places of origin due to inhabitability issues also make this challenge a focus on social justice. The majority of people who are most deeply affected by environmental change —including climate change — are those that have few to no resources.

There’s a lot of thought that needs to go into the way we treat people and understand all the factors involved.

“Once your cardboard house gets swept away, now what?” said Marleen Wong, clinical professor and senior associate dean of field education at the USC Suzanne Dworak-Peck School of Social Work. “You already didn’t have many clothes. What little you had is now gone. Sometimes the only intervention is you see who’s alive and you move them somewhere else. There’s a lot of thought that needs to go into the way we treat people and understand all the factors involved.”

Wong is internationally recognized for her work in disaster recovery, trauma and mental health, and was a major contributor to the working paper on environmental change chosen by the American Academy of Social Work & Social Welfare to be one of the 12 Grand Challenge initiatives for social work. She feels the three-tier model allows the profession to look at the social response to environmental change on a much larger scope and scale.

“If there are pieces that are missing anywhere in those three tiers, it creates a gap in what can be an optimal response to a tragedy,” Wong said. “If we can address these gaps, then it promotes healing and far more effective responses to recovery.”

One of the “challenges” of this grand challenge will be creating an infrastructure for specializing in environmental change within social work education. The approach of combining macro, mezzo and micro is still a rather innovative idea with regard to this problem. Most schools of social work do not even offer the opportunity to focus on social work and the environment.

Historically, social workers have been left to “clean up the mess” in terms of delivering services to people who are already traumatized. By thinking about what their role is with regard to all three tiers, Palinkas proposes that social workers can make a major difference in solving the problems of environmental change.

Theoretically, this approach will require interdisciplinary practice with professionals in public health, urban planning and even geophysical and climate sciences; integration of global knowledge with local experience; and, perhaps most important, the implementation of policy at the local, state and national levels that makes sense for the changing environmental reality.

“Social workers are, by virtue of their training and their role in communities, best positioned to lead all of these activities, rather than merely be foot soldiers who are taking direction from somebody else,” Palinkas said.

The impact of environmental change will not reverse itself. It will take mobilization at the highest level on an issue that, in one form or another, affects every person on the planet. One beacon of light in the storm is the younger generation, which is acutely aware of the need for stewardship of the environment and the implications of failing to do that.

“Our approach has really been to nurture the millennials and build this Grand Challenge from the ground up,” Palinkas said. “That’s where the passion lies. That’s where the enthusiasm lies. Because they know they’re going to be more affected by this than we have been.”

The USC School of Social Work has kick-started a national Grand Challenges initiative to identify and highlight the most serious societal ills that social work can — and should — address.

USC sets out to build social work program in China