Lewis was raised in the San Diego area, and went on to study at California State University, San Diego and later at Claremont Graduate School and at the Hochschule für Musik in Munich, courtesy of a Fulbright Scholarship. 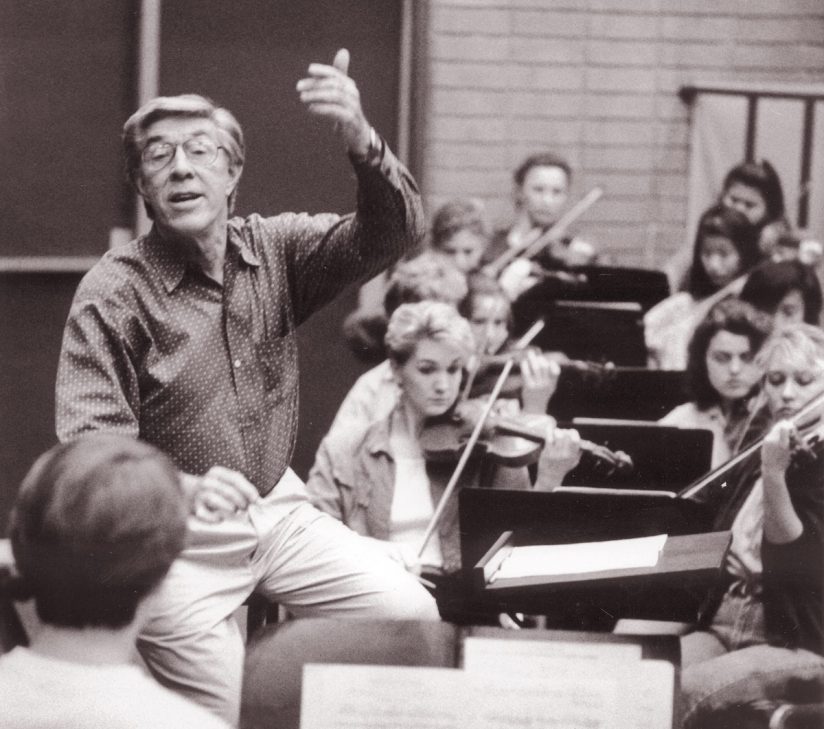 Daniel Lewis rehearses with the USC Thornton Symphony in the 1980s. (Photo/Courtesy of Joni Steshko)

Lewis conducted the orchestra and marching band at Helix High School in La Mesa, experiences that gave him a unique perspective on student musicians.

“He had done a lot of professional conducting, but he felt that his experience in public school teaching was a very big part of what made him effective and successful,” said Larry Livingston, current chair of the department of Conducting and dean of USC Thornton for nine of Lewis’ 25 years at USC. “He had all kinds of interesting ideas about conductors and music.”

Lewis garnered a reputation for bringing out the highest level of skill in his orchestras. He was music director of the Pasadena Symphony from 1971 to 1982, which received numerous professional accolades including five ASCAP awards for adventurous programming, raising that orchestra’s profile to a level rivaled locally only by the Los Angeles Philharmonic.

On a good day, his USC orchestra could withstand comparison with almost any orchestra in academia and beyond.

“On a good day, his USC orchestra could withstand comparison with almost any orchestra in academia and beyond,” wrote critic Martin Bernheimer in the Los Angeles Times. “His students, moreover, have gone on to spread the Lewis gospel nationally.”

As a highly-regarded teacher of conducting, Lewis taught at numerous workshops and masterclasses including the California Conducting Institute, League of American Orchestras, and the Conductors Guild, among others.

“I think the most important thing I relayed [to the students] is the attitude that I relayed to them of professionalism, of the responsibility to the music and to making music,” Lewis said during a 2006 Living History interview. “I was very, very hard on the rules and regulations. People did not miss rehearsals.”

MORE ON DANIEL LEWIS: An extended version of this story appears on the USC Thornton website.

USC Thornton students take on challenges in the music industry

Professors pull no punches in the ‘Music Media Solutions’ course, which toughens Trojans for the road ahead.

USC Thornton musicians find a home away from home

Composer and his wife remodel their house to create an intimate performance venue for chamber musicians, including many Trojans.