Being endangered isn’t just for blue whales and the Bengal tiger. Languages can also be threatened with extinction.

As globalization progresses, cultures shift and numbers of native speakers dwindle, languages are disappearing from Earth at an alarming rate. We stand to lose half the world’s languages and language families in the next couple of decades, according to Tok Thompson, associate professor (teaching) of anthropology and communication at the USC Dornsife College of Letters, Arts and Sciences.

Language revitalization movements have arisen around the world to try to counteract this phenomenon. In Ireland — where 10 USC undergraduates this summer explored the politics of language revitalization and how language has an impact on cultural and national identity — the Irish language Gaelic has been a required subject in government-funded schools for nearly 100 years. Though it is an official language along with English, it currently has no more than about 80,000 native speakers today.

Thompson led the visiting students in a range of activities, including talks with members of the revitalization movement, cultural visits to museums and schools and interviews with local Irish citizens about their experiences with language. Students, visiting as part of the Problems Without Passports course “Indigenous Languages in Ireland/Northern Ireland,” got a crash course in local language and culture, and also received instruction on Irish dancing.

Learning from the locals 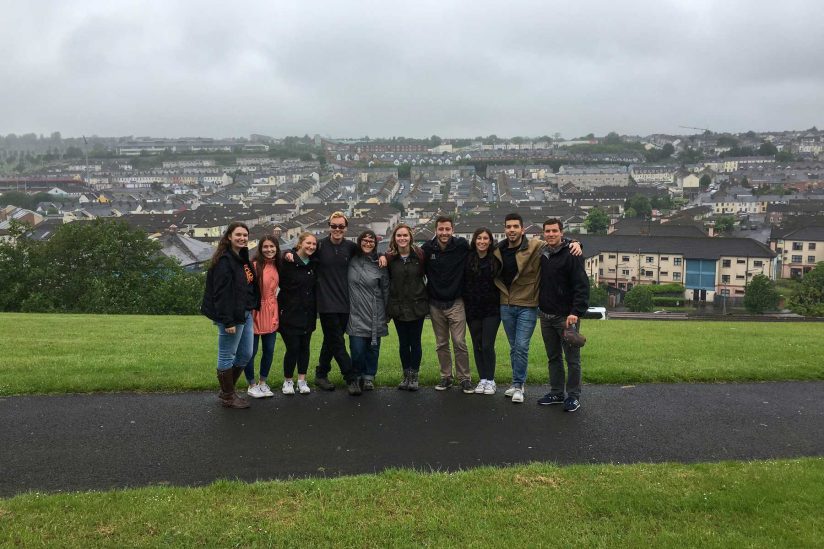 The group poses together in Londonderry, Northern Ireland. (Photo/Courtesy of Adam Woodnutt)

Over 10 days, they traveled from Dublin to Galway, then to Londonderry and Belfast in Northern Ireland, finally visiting Donegal and Glencolmcille. Those last two are Gaeltachts — regions in which Irish is the primary spoken language.

The students interviewed anyone willing to speak with them — be it a taxi driver, barista or random person on the street — to learn about differing attitudes toward the Irish language. As Thompson reminded the students, when doing fieldwork, one never knows where the best stuff is going to come from.

“The fieldwork was probably my favorite part,” said Amanda Broder-Hahn, a narrative studies major who will be a senior this fall. “In one city, I got my best work done in a little coffee shop, just talking to people coming in and out. Through fieldwork, I got to know each city in a way that I definitely would not have as a tourist.”

Many of the 30 people she spoke with — particularly in Dublin — felt that Irish instruction was merely something that was forced down people’s throats in school. Others had a more positive perspective.

One woman Broder-Hahn met in a café had moved to Ireland from England with her husband to work in technology. Her two children were learning Irish in school and really enjoying it: Her 13-year-old daughter texted her friends exclusively in Irish, and her younger son happily noted how fun it was to have a language that his parents don’t speak.

When language gets political

Adam Woodnutt, who will be a senior in the fall and studies linguistic and psychology at USC Dornsife, focused on regional differences of opinion regarding mandatory Irish instruction in schools. He also documented the rhetoric of graffiti he encountered, which alternately promoted and criticized the language and revitalization movement.

Though Dublin has an active subculture of Irish speakers with its own pubs and cafés, Woodnutt also found that many Dubliners were not in support of mandatory Irish education in schools, even if they favored revitalization generally or spoke the language themselves.

“They thought it wasn’t useful or made people dislike the language,” he said. “But up in Galway and Glencolumcille, attitudes were very much, ‘It’s our language, so it should be taught. If English is mandatory, then Irish should be too, since they’re both national languages.’”

In Northern Ireland, attitudes about the language issue are incredibly fraught. A brittle tension remains between Catholics and Protestants and is a nagging reminder of the sectarian violence that roiled Ireland for decades, including the infamous Bloody Sunday massacre in 1972 when British soldiers shot 28 unarmed civilians during a peaceful civil rights demonstration.

Historically, the Northern Irish government has been hostile to the Irish language, and that enmity lies at the intersection of the cultural and political conflict. Some local activists promote a language act that would provide government funding to protect Irish and create educational resources, but it’s a veritable minefield.

I was struck by how palpable the tension was in Northern Ireland.

“I was struck by how palpable the tension was in Northern Ireland,” Woodnutt said. “You learn about the political troubles that happened there, but it somehow feels removed. Then you go there and can very much feel the tension, still.”

By studying in Ireland and Northern Ireland, students could explore firsthand the process of language revitalization in a place that has had mixed success — and think about why it hasn’t flourished.

“What’s fascinating about the Irish situation is that they’ve been working at this for a long time,” Thompson said. “So I wanted students to look at what works, what doesn’t work, and how we can bring some of those lessons home and look at our own native languages here — America is No. 2 in the world for language loss. So that is also one of my goals with this course.”

A USC Dornsife College of Letters, Arts and Sciences graduate and undergraduate have received the Summer 2012 Foreign Language and Area Studies Fellowship for a commitment to developing Mandarin-language skills.