Rice was going to ask Buhl, who is 25 and homeless, if he wanted to help him with his research, educating other homeless youth about HIV. It was for a pilot study he was doing on HIV education in Los Angeles. Homeless youth would be trained as educators and get the word out to their friends.

Rice, an associate professor in the USC Suzanne Dworak-Peck School of Social Work, wandered to the sand and found Buhl partying on the beach with friends. He gave him the details: Be at Safe Place for Youth on Lincoln Boulevard at 9 a.m. Friday. Rice didn’t have high hopes.

Then Friday rolled around.

“I show up at 8:15 and there he is outside sitting on his skateboard, stone sober, cup of coffee in his hand — ‘Hey man, can I help you get stuff out of your car to set up?’” Rice said.

It was surprising to Rice, in more ways than one, because Buhl wouldn’t have jumped out to him as a possible peer leader. He was kind of standoffish and kept to himself. But Rice wasn’t relying on his intuition as a social worker in reaching out to Buhl; he was relying on artificial intelligence.

An algorithm had picked Buhl.

When it comes to public health, workers have long used personality to choose peer leaders — they go for the popular kids. But that method hasn’t always proven effective.

Then Rice met USC Viterbi School of Engineering Professor Milind Tambe, and together they came up with artificial intelligence that picks out the peer leaders based on analysis of their social networks. Instead of seeing how they act, it looks at how connected they are.

The algorithm looks for cliques of youth and picks from them key people from those spaces.

“The algorithm looks for cliques of youth and picks from them key people from those spaces,” Rice said. “[Buhl] was really important in terms of how he was tied into this group of folks camping on the beach.”

In Rice’s pilot study, researchers had two groups: those, such as Buhl, who were picked by the algorithm; and the control group whose peer leaders were picked because they were seen as popular within the population, the old way of doing things.

In the control group, though, only 27 percent of the network got increased education and outreach — and none who needed HIV tests got them.

This is the first time a peer intervention model has been used with homeless youth, Rice said, and if the full study — which started this summer — has similar results, it could provide a tool for organizations around the world.

The study is also one of only a few longitudinal studies on homeless youth in the United States. Researchers aim to enroll nearly 900 youth, checking in with them three times over three months.

In 2013, 60,900 youth were HIV positive in the U.S. and more than half of them were undiagnosed — the highest rate out of any group, according to the Centers for Disease Control and Prevention. When it comes to homeless youth, Rice says high-risk behaviors — like not getting tested or using condoms — can be exacerbated due to the nature of their lives. About 1 in 4 engage in “survival sex” — using sex as a way to secure resources, like a bed for the night, Rice said.

“That puts them in a lot of risk because in those situations you rarely have a lot of negotiation power,” Rice said. 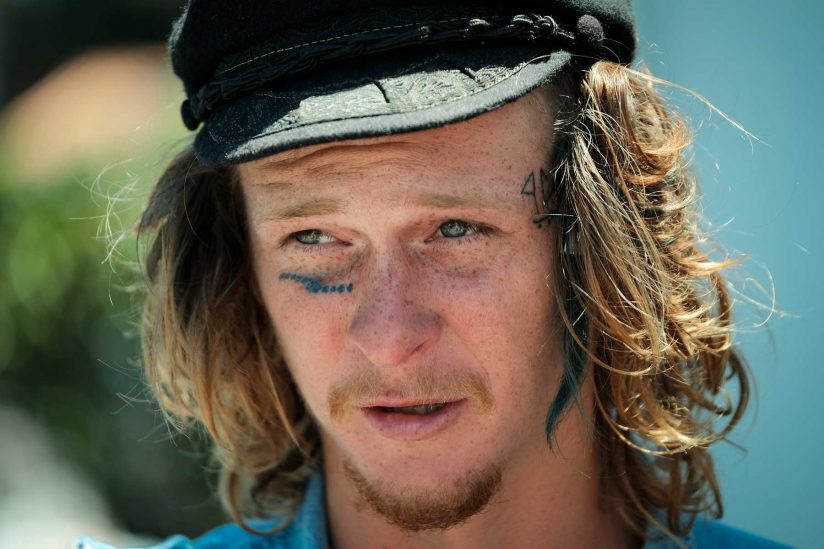 Buhl, who has been homeless since he was a teenager, really enjoyed the peer leader role. He would tell his friends about Safe Place for Youth, a drop-in center in Venice. He told them about free HIV testing, dental care and legal help they could get. He let them know about the computers for job searching.

“I learned safe sex and how to be a good peer leader and push them in the right direction … to be safe and not sorry,” Buhl said. “I was really stoked about it. Most kids don’t know so much.”

Rice and the other researchers saw peer leaders like Buhl transform with the new role.

Buhl went from being quiet around adults to being friendly with staff and researchers. He started using all the resources he told others about. He had confidence, Rice said.

“I saw youth that weren’t involved in programming at all come out of their shells, like speak at conferences,” said Juliana Hudson, Rice’s research assistant and a USC Master of Social Work candidate who used to work at Safe Place for Youth.

That discovery — that Buhl and other peer leaders benefited from the work — wasn’t part of the study’s hypothesis, but it is now a crucial part of the full study. In about a month, researchers will pick peer leaders, tracking how they change as well. To Rice, it shows that many youth were just looking for a chance to step up. 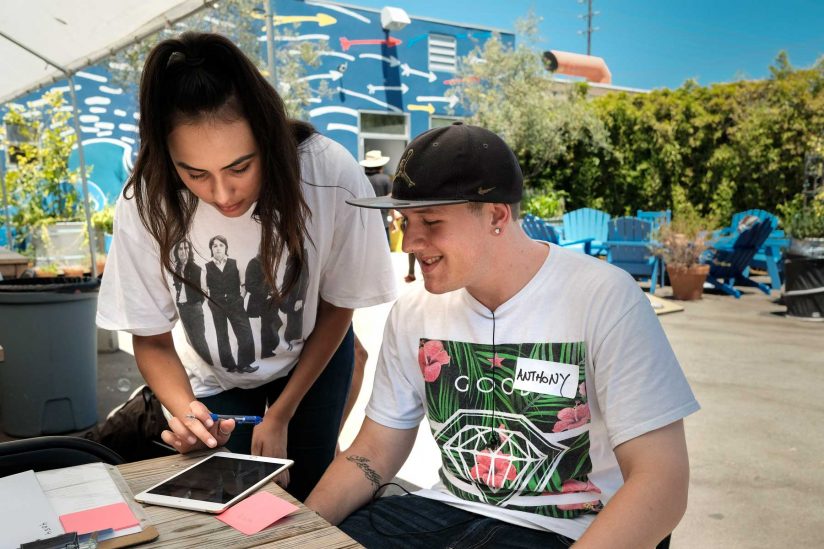 Nicole Wilson, a Master of Social Work candidate, helps Anthony Farley, a homeless youth, with his survey. The information Farley gives on his lifestyle and behaviors will be tracked over three months. (USC Photo/Gus Ruelas)

Since homeless youth are hard to track, Rice partners with organizations across L.A.: Safe Place for Youth in Venice, the Los Angeles LGBT Center in Hollywood and My Friend’s Place in Hollywood.

“Los Angeles in particular is important because we’re seeing a growth in the number of homeless youth,” he said.

This year, the Los Angeles Homeless Services Authority with help from USC counted about 6,000 youth on the streets of Los Angeles County. LAHSA shows that as a 61 percent increase over 2016, but experts — such as Rice — say more effective counting of the population (by partnering with organizations) is likely to blame for some of the jump. Nevertheless, youth numbers are increasing across L.A., seen firsthand by these organizations who see their intake numbers climb, he said.

“If it turns out this is the way to go, we want to put this software and bring this youth training to every shelter and drop-in center in the country,” Rice said. “It would be wonderful to have an effective tool to have homeless youth be healthy as they struggle to get back into the world.”

USC researcher, and AI, give homeless youth a helping hand with HIV education