With its steady rumble of traffic, Encino’s bustling Ventura Boulevard in Los Angeles’ San Fernando Valley could not seem more far removed from the peace, pristine air and sweeping mountain views of the tiny Himalayan kingdom of Bhutan in Asia. 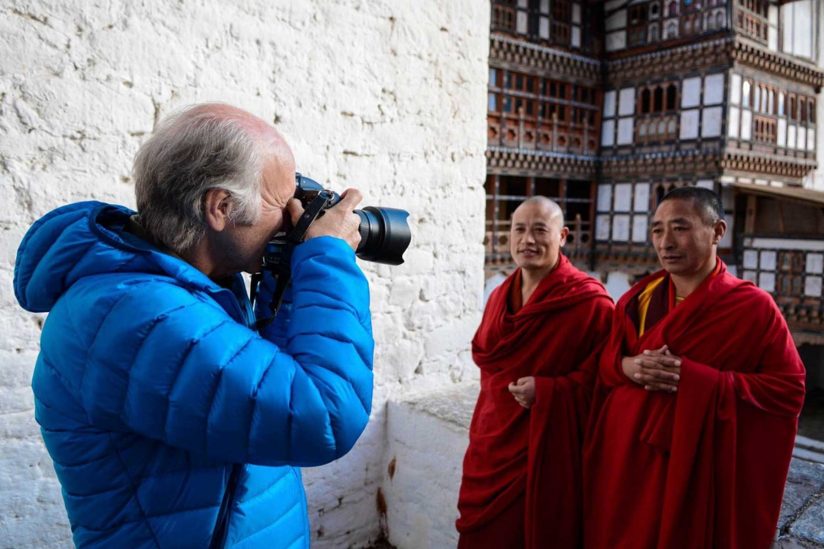 Barry Shaffer ’70, however, feels at home in both worlds. After serving for more than 40 years as a dentist in Encino, his work as an accomplished photographer is on display with the publication of his first fine-art photography book, Echoes of Bhutan (EBS Editoriale Bortolazzi Stei, 2017). The book was launched last month at the Telluride Mountainfilm Festival.

In one photograph, children wearing traditional clothing grin impishly as they pause on their walk to school along a rural road. In another — taken after Shaffer left the hotel on his first morning in Bhutan — clouds hover over snow-scattered Himalayan foothills while a traditional Dzong temple occupies the foreground.

“There’s a particular fondness for that image,” Shaffer said, “because it was so amazingly beautiful and pristine and so out of my usual world.”

The photographs spanning a period of 15 years were chosen from more than 5,000 taken over the course of three trips to Bhutan. He made the first journey in 2001 as a private citizen, the second as a photographer for the Tribal Trust Foundation in 2014 and the third in 2015 at the invitation of Bhutan’s government and travel industry — a rare honor. The photographs are accompanied by written contributions from some of the most illustrious members of Bhutan’s ruling class, including its Queen Mother, fourth king and prime minister.

The images depict the country’s unique culture and aim to capture the principles behind the nation’s commitment to Gross National Happiness — its signature quality-of-life indicator, which prioritizes civic contentment, cultural preservation and environmental sustainability above material development.

‘A kind of Shangri-La’

Telluride was a fitting choice to launch the book. That was where Shaffer was first inspired to take up photography in the 1990s and then later to travel to Bhutan after hearing renowned Indo-Tibetan-Buddhist scholar Robert Thurman speak at the festival in 2000.

“Hearing Dr. Thurman describe a very pure Buddhist culture among the beautiful mountains and valleys of the Himalayas — a place he portrayed as ‘The Land of the Thunder Dragon’ — made it sound like a kind of Shangri-La,” Shaffer said.

“Dentistry is a rewarding profession, but it is also confined to a particular space. I always had the urge to explore, and it was such an inspiring talk that I felt destined to go, and nine months later I did.”

Noting that “Bhutan is a magnet for people who are searching for ‘the answer,’” Shaffer, who at the time was 52, admits that his first trip to Bhutan corresponded to a period in his life when his own search for life’s meaning had grown more powerful.

Shaffer is not a Buddhist, but he does feel a lifelong affinity for the mountains — a place, he said, “where I’m able to maybe be a believer.” This spiritual quality in the landscape is what drew him first to Telluride and then to Bhutan. 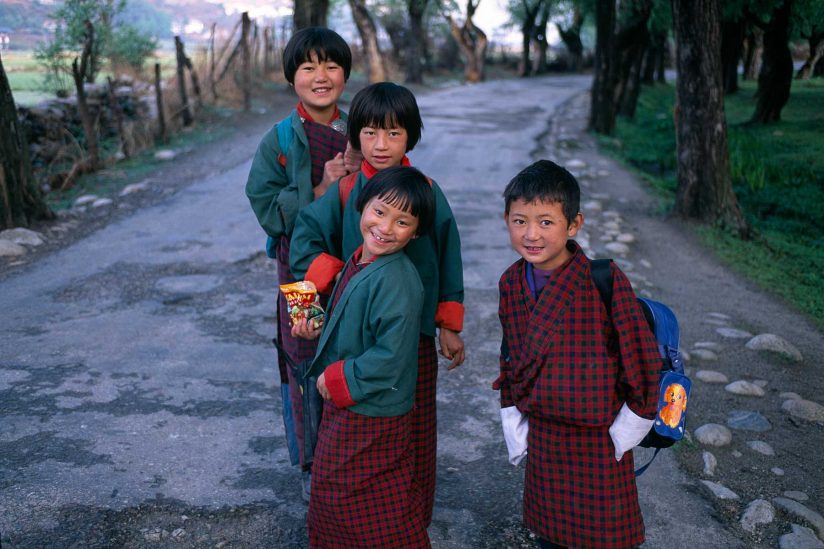 Bhutanese children wearing traditional dress pause for a picture on their walk to school in the Bumthang Valley. (Photo/Barry Shaffer)

He made his first trip in 2001, flying from Los Angeles to Bangkok and then on to Bhutan’s tiny Paro airport, nestled among the steep mountains of the Himalayas.

“Coming off the plane the first time was just like nothing I could have ever thought actually existed,” Shaffer said. “It was so unique, like a wonderland — majestic, tranquil and stunningly beautiful.”

He spent weeks camping and trekking to remote parts of the country to photograph Bhutan’s landscapes and people.

“It’s a land of ancient monasteries, fluttering prayer flags and unforgettable beauty, where one cannot help but feel a lasting sense of peace,” he said. “I think that if you were to write down how human life was supposed to be, then this was it — a great sense of spirituality, of happiness, of camaraderie, a very clean and pristine environment. And an ever-present sense of karma.”

He pays tribute to the tremendous warmth and regard for people he experienced in Bhutan.

“I could not distinguish if somebody was a family member or if they had never met before,” he said.

Growing up in L.A. as the son of a homemaker and a real estate investor, Shaffer envisioned himself as a dentist.

“I had a couple of really dynamic dentists as a kid,” he said, laughing.

After earning his bachelor’s in history from USC Dornsife in 1970, he attended the Herman Ostrow School of Dentistry of USC, graduating in 1974. In 2000, he began to cut back on his dental practice to start focusing on photography, enrolling in the professional photography program at the Brooks Institute of Photography in Santa Barbara from 2002-04.

Shaffer said he is grateful for the balance his USC education gave him between the sciences and the humanities.

“It’s really important to have that kind of exposure because in essence we live our lives day by day in the form of the humanities.”

Shaffer is also quick to pay tribute to his wife, Barbara, who shares the title credit on Echoes of Bhutan and whom he sais has been instrumental, both in the book’s development and in his photography career.

All proceeds from sales of the book, which includes a foreword written by Thurman, will benefit the Tarayana Foundation, a nonprofit organization established by Bhutan’s Queen Mother to uplift and enhance lives of the country’s vulnerable individuals and communities. In addition, during Shaffer’s 2015 trip, he donated camera equipment and trained a Bhutanese national so the country will have the equipment and skills to maintain photography for its burgeoning tourist industry.

A founding board member of Global Dental Relief, an international volunteer organization to take dentistry to remote parts of the world, Shaffer has traveled to Nepal, India, Vietnam and Guatemala to offer his dentistry skills. By making his photographs and professional skills available to nonprofit organizations, he now hopes to engender better understanding among people, help those struggling for life’s basic needs and do his small part to create a better planet.

Shaffer said one of the things that drew him to photography was the ability to connect to people’s lives that he had experienced in his dental career.

“I knew the time would come when I would no longer practice dentistry, but I wanted to still be able to maintain those kinds of connections,” he said. “And with photography, you can.”

Listen in as students and faculty from the Herman Ostrow School serve more than 100 kids in Pasadena. For many of the kids, it was their first time in a dentist’s chair.

How a childhood visit to the dentist changed a life