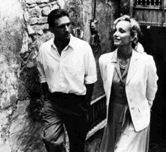 Miramax Films’ The English Patient has won the ninth annual Scripter Award, honoring the year’s best film adaptation of a book. The award is sponsored by the Friends of the USC Libraries and honors the author and screenwriter of the best realization of a book as an English-language film.

The English Patient – based on Michael Ondaatje’s Booker Prize-winning novel – was adapted for the screen and directed by award-winning writer/director Anthony Minghella. Ondaatje and Minghella will be honored on Saturday, Feb. 8, at the Scripter Award black-tie dinner in the Doheny Memorial Library. Following tradition, comedy writer Hal Kantor will be master of ceremonies.

The English Patient – an epic film of adventure, intrigue, betrayal and love – is about four strangers whose diverse lives become inextricably woven. Other finalists for this year’s award were: Cold Comfort Farm, Dead Man Walking, Emma and The Portrait of a Lady.

In addition to The Accidental Tourist, previous winners also include Sense and Sensibility, The Shawshank Redemption, Schindler’s List, A River Runs Through It, Fried Green Tomatoes, Awakenings, and 84 Charing Cross Road.

For more information or to reserve tickets to the dinner, please contact Karin Berger at 213-740-2328.TTT