Sandwiched between a group of Afghan goat herders and a Sikh businessman seven years ago, Julian Leuthold ’10 inched forward in the long customs line at a Delhi airport. 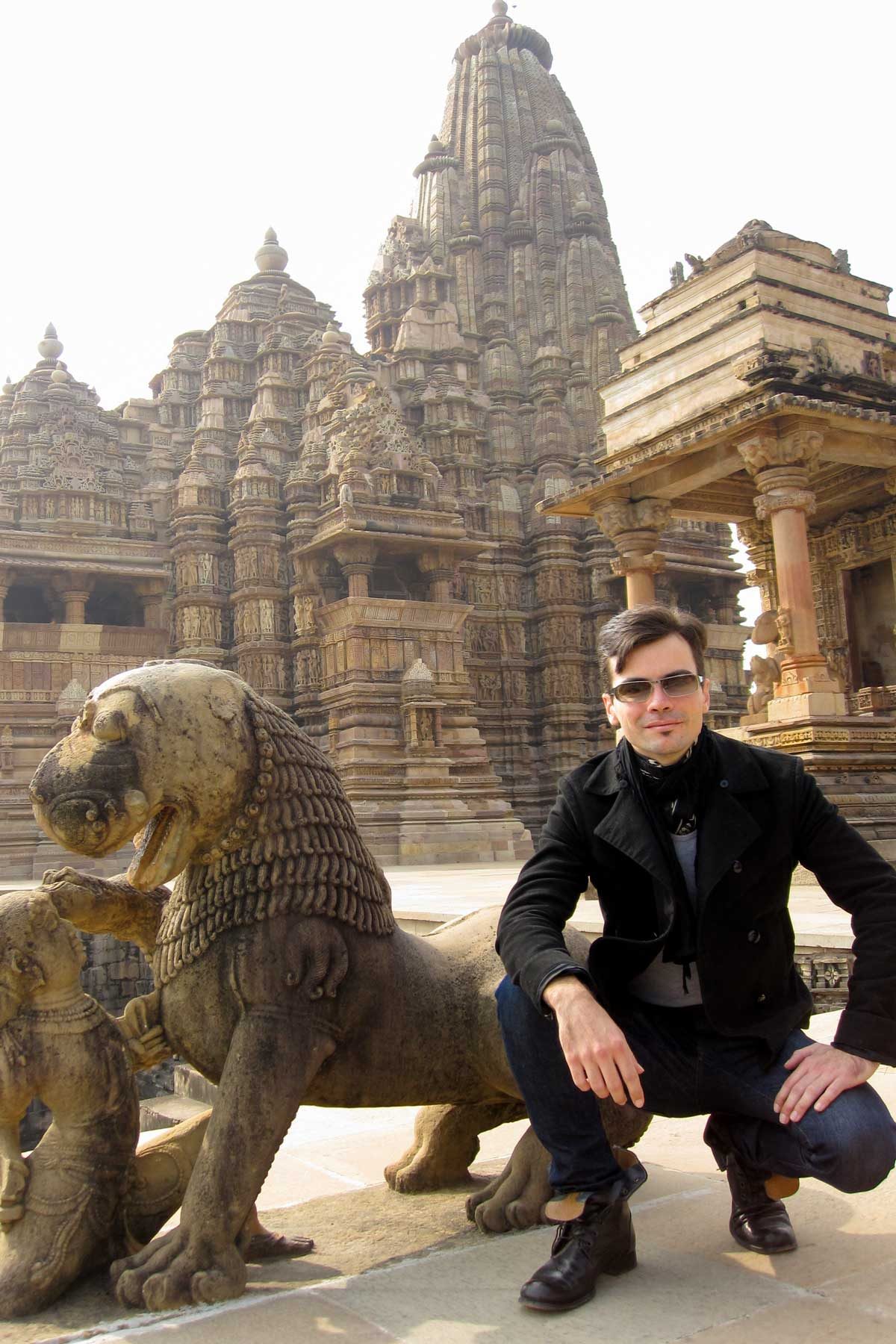 Julian Leuthold visited the thousand-year-old temples of Khajuraho during his first trip to India in 2010. (Photo/Sarah Browning)

At the time, Leuthold was exploring the country’s nuclear policy as part of a study abroad program. It was his first trip to India and the culture shock was intense. But the senior, who graduated later that year with bachelor’s degrees in international relations from the USC Dornsife College of Letters, Arts and Sciences and marketing from the USC Marshall School of Business, kept an open mind as he plunged into this unfamiliar new world.

That spirit has repaid him a thousand times over, most notably in his successful career as the founder and CEO of Geoskope. In October, the company presented GetGlobal, the first conference on how to succeed in foreign markets.

Leuthold traces the germ of the idea for GetGlobal back to some unexpected observations he made during that study abroad program.

Two factors helped him adapt to his new life. First — and quite unusual for an expat — he didn’t hang out with many Americans.

“All my friends were Indian and I started to feel very comfortable because I left behind all my assumptions,” he said.

“I tried to live my life in India the way Indians live theirs.”

Second, although no one in his family had ever been to India, his mother and grandmother both had Hindu gurus, and Leuthold spent his childhood surrounded by Indian books and artifacts.

“Growing up, I also became familiar with the Tibetan diaspora,” he said. “So it was an easy jump for me to understand India on its own terms because the words, lifestyle and cultural materials had been so familiar to me from a very young age.”

After talking his way into a semester of graduate study at New Delhi’s prestigious Jawaharlal Nehru University, Leuthold’s circle of friends expanded to include numerous Indian executives.

“They kept asking me, ‘Julian, why do American companies come here and make so many mistakes? Why do they repeat the same errors, time and time again?’”

Leuthold didn’t have a ready answer, but couldn’t get the question out of his head.

As he pondered, he began to recognize a pattern.

Companies going into India assumed there was a subcontinent full of people just waiting to buy their products.

If they want to succeed, they need to stop underestimating the sophistication of the country they’re dealing with.

“And that just isn’t the case,” Leuthold said. “If they want to succeed, they need to stop underestimating the sophistication of the country they’re dealing with. American companies need to get to know Indian society and how it works and figure out the best way to meet it — its diverse cultures, structure and history — halfway. Instead, I realized, most business executives are just making it up as they go along and Indians easily recognize this.”

The more he explored, the more Leuthold realized this lack of cultural and institutional fluency was not limited to India.

“It’s Brazil, it’s Mexico, it’s the countries of Africa and even Canada. American companies have a really difficult time understanding how things work in most countries,” he said. “That isn’t to say that nobody gets it right, but it’s not made easy.”

A Brookings Institution report confirmed his worst suspicions. “It made plain what I’d been suspecting the entire time: Nobody was pulling together all the necessary participants of trade and investment under one roof.”

Leuthold was determined to change that. In 2011, and later with the help of two of his former USC Dornsife professors, David Karl and Pamela Starr, he founded Geoskope, a company that grew out of his observation that businesses with ambitions to expand into foreign markets lacked a one-stop destination to get their questions answered.

“I realized this was a major opportunity to pull together key participants in international trade and investment and build a conversation about how to compete successfully internationally,” Leuthold said.

“This was the big experiment,” Leuthold said. “Will they mix?” The answer was a resounding yes.

“We had former Mexican intelligence officials sitting next to a virtual reality game producer and executives from an organic beverage company.”

Leuthold finds bringing people together immensely satisfying because he said it helps people to grow, question and see things from different viewpoints.

“What excites me most about what I’m doing is the possibility of being the platform for a conversation on the connection of cultures through trade that’s been going on since tribal Africa but didn’t have a venue until now. That kind of blows my mind when we could be using this conversation to build connections and move the world forward in a positive direction.”

Leuthold’s decision to hold GetGlobal in his hometown is a strategic one.

“In D.C., everyone asks me, ‘Why L.A.?’ The answer is that we can get away with more in L.A.: more humor, more glamour. We can break a few rules. It might not fit in D.C., but here it makes sense and our attendees delight in that.”

Initially drawn to USC by its diversity, Leuthold now finds that the same quality in the international Trojan Family is of enormous benefit in building his business. Leading Indian economist and alumnus Ajay Shah “couldn’t have been friendlier,” for instance, when Leuthold reached out.

Meanwhile, Leuthold’s vision for GetGlobal is ambitious. “One day, it will draw 80,000 people to downtown L.A.,” he said with a grin.

His confidence, however, is tempered by humility.

“The standards in international business, policy and economics are exceptionally high and you can’t just bluff your way through that. You have to be tremendously good — inside and out — to parade on in with a circus behind you.

“Am I there? Absolutely not. It’s an ongoing struggle every day to make myself better, but I think the process of having no footholds, no place to rest anything, has helped me.”

Nobody quite knew how this bold idea would work — nearly four years later, the results are in.

Setting aside jobs and schedules, Trojans from four USC schools claim victory in an international event focusing on mental health in Liberia.

Visitors from 10 European countries exchange ideas on how to counter violent extremism.