The clues are all over the internet.

What you had for lunch. What you just bought. What you want to see on Netflix.

This is the raw material for marketing and public relations experts who want to identify the Next Big Thing. But with seemingly infinite pieces of data out there in the digital universe, what are the best ways to analyze it — ways that could provide accurate trends in human behavior and even hint at the future?

Enter netnography, a fusion of ethnography and the internet. It’s a research method developed and named by Robert Kozinets, Hufschmid Professor of Strategic Public Relations and Business Communications at the USC Annenberg School for Communication and Journalism. And at long last, Kozinets recently offered USC students a chance to dive into the process, which could help them in their quest to become the next generation of public relations and marketing gurus.

As Kozinets explained it, netnography — a subset of digital anthropology — is a systematic, ethical approach to following the millions of breadcrumbs scattered across social media. Marketing researchers and strategic public relations experts have used elements of the approach for more than a decade.

It’s how Nivea identified the next big thing in deodorants — a product that leaves no chalky trace on your shirt. When L’Oréal wanted to know why Chinese Canadian consumers were “over-indexing” — buying and spending a lot more than the average Canadian — they hired Kozinets to investigate. His ethnographic interviews with Toronto- and Vancouver-area women probed the beauty principles and social codes that explain the pattern.

This spring, 11 USC Annenberg master’s students and 41 students at the USC Marshall School of Business, where Kozinets holds a joint appointment, took netnography courses at USC directly from the man who named it. Although netnography is widely used in classroom exercises, this is thought to be the first time anyone taught courses exclusively devoted to the powerful social media research method.

Among the projects by the recently graduated students:

• Amy Li studied how Chinese telecom giant Huawei could better leverage social media to break into the U.S. market. Fifteen weeks of online scouting, data collection, coding and analysis and in-depth interviews had revealed two important subcultures. Li calls them die-hards and switchers. The former are passionate about their Huawei phones, but mostly quiet on social media; the latter are loud but fickle. If Huawei could mobilize these two audiences as brand ambassadors, the impact might be big.

At the start of the class, Li landed a job with the company’s international marketing department of the company, where she’ll put her insights to use.

• Amy Chiu uncovered an intriguing subculture of people using the Hulu streaming service as a “synthetic companion” to provide background noise while they work or sleep, or a familiar voice while they do mindless chores. They “listen to” rather than “watch” Hulu, repeating episodes they’ve already seen. 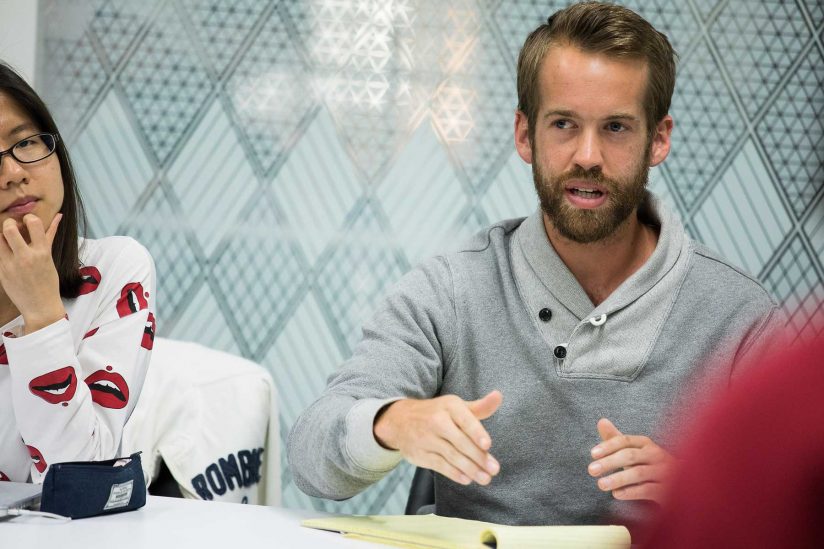 “It turned out that Instagram and YouTube were really important for Amy’s project,” Kozinets noted. “People weren’t going on forums and saying: ‘I listen to Hulu in the background.’” Rather, they posted pictures or video with Hulu visible on a screen in the background. With netnography, he explained, “very often you’re looking for a needle in a haystack. Something unusual that might give you an idea of where the mainstream is headed.”

• Ian Hurley MA ’17 looked at social media audience engagement opportunities for REI. The outdoor gear retailer gained attention for its #optoutside campaign to encourage people to go into nature instead of going shopping on Black Friday. It has also run a female empowerment campaign. But more seemed possible. Hurley broke down the social media communities around backpacking, hiking and running into eight experience levels — Alpinists at the top, novices at the bottom and then broke the groups down even more.

More valuable than the specifics of his REI netnography, however, is the appreciation Hurley gained for real-world qualitative research.

“That’s what the class left all of us with: that this is difficult to do. It takes time,” he said. “And it’s important.”

USC Viterbi student works on issues that get between you and your destination while flooding the net with likes, selfies and those funny cat videos.

Is the Internet fueling social change or giving license to engage in lazy activism?

USC Dornsife scholars give insight into the influence of online political activism on society and on participants’ individual psyches.

Studio session artist steps out of the shadows and generates new sources of income.

Marketing and PR secrets of the internet — he’s teaching them