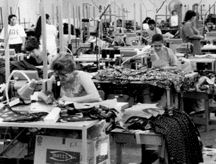 Seamstresses such as these at work in a Los Angeles garment district shop have been shown to be at a greater risk of developing Alzheimer’s disease. The workers are exposed to medium to high EMF’s from sewing machines.

Occupational exposure to electromagnetic fields can lead to an increased risk of developing Alzheimer’s disease, USC researchers reported in a new study of more than 300 Southern California patients.

Eugene Sobel, professor of preventive medicine and neurology, and his colleagues examined the incidence of moderate to high occupational electromagnetic force (EMF) exposure among Alzheimer’s disease patients and controls. The most common highly exposed occupation was that of sewing machine operators, who are exposed to strong, continuous EMFs over a long time.

Sobel’s group studied patients from the Alzheimer’s Disease Treatment and Diagnostic Center at Rancho Los Amigos Medical Center in Downey. The researchers compared occupational history data from Alzheimer’s patients with information from a group of control subjects who had been diagnosed with some other kind of cognitive impairment or dementia. The work was published in the December issue of the journal Neurology.

Epidemiological analysis of the patients’ primary occupation showed that individuals such as seamstresses who had likely been exposed to electromagnetic fields in their occupation had nearly four times the risk of developing Alzheimer’s disease than individuals who had little or no occupational EMF exposure.

“Seamstresses seem to be among the individuals with the highest occupational EMF exposure,” said Sobel. “They sit near motors of sewing machines for hours, and most industrial sewing machines are always on, and always produce magnetic fields.”

That’s quite a difference, he said, from casual use of a sewing machine at home. But new computerized home sewing machines, he noted, have a rectifier, which continuously produces a strong magnetic field, even when the needle is not operating.

In some cases, Sobel said, relatively minor design changes to some equipment, particularly sewing machines, might mean a significant decrease in magnetic field exposure. “The rectifiers in computerized home sewing machines could be taken out of the machine casing, put on a cord and positioned away from the operator,” he said. And in industrial machines, motors could be shielded with a special metal that redirects the field.

Sobel emphasized that the EMF-Alzheimer’s association was found for magnetic fields generated from “electrical and motorized equipment located very close to the body, not necessarily the head.” Electromagnetic fields from sources like high-power electrical lines tend to expose individuals to much weaker fields than those produced by industrial sewing machines or similar equipment.

In a second paper in the same journal, Sobel and Zoreh Davanipour describe a hypothesis linking the development of Alzheimer’s disease to EMF exposure.

Increased exposure could change the balance of calcium in some cells in the body, the researchers speculate, thus causing increased production of a protein called amyloid-ß. The protein is secreted from cells into the bloodstream. Other research indicates that amyloid-ß may aggregate within the brain, and previous research has shown that such buildup of amyloid-ß is associated with the processes that accompany Alzheimer’s.

“There now needs to be some testing to learn whether exposure to electromagnetic fields causes any change of amyloid-ß levels in the blood,” said Sobel of the hypothesis that has the potential to close some of the experimental distance between epidemiologists and biochemists.

Previous work by Sobel and colleagues showed a high correlation between occupational EMF exposure and Alzheimer’s disease in three studies, two Finnish and one at USC.