As the USC readied the University Park Campus for commencement, the USC Libraries joined with the rest of the Trojan Family to celebrate the academic achievements of exceptional student scholars in a series of ceremonies May 10-12. 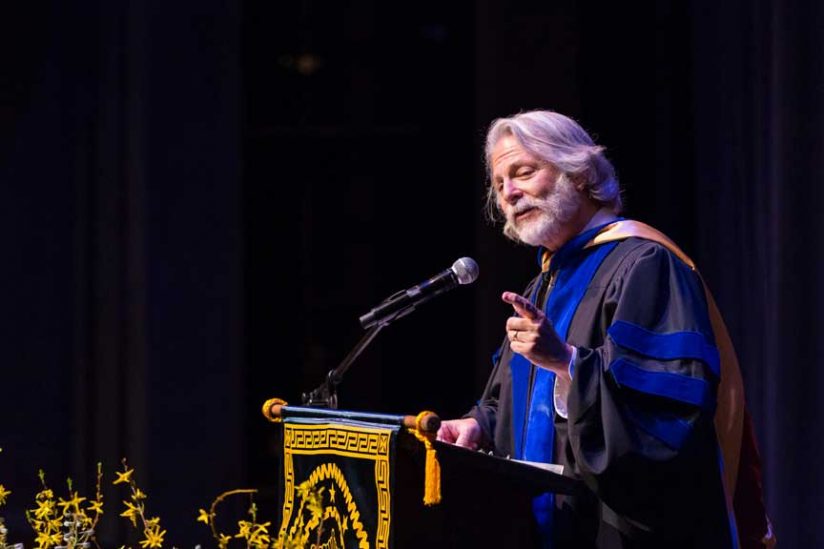 The festivities began on the afternoon of May 10 with the initiation of 257 students into the Honor Society of Phi Kappa Phi. The organization’s USC chapter, which makes its home at the USC Libraries, is the university’s oldest fully interdisciplinary honor society. Dean Amber D. Miller of the USC Dornsife College of Letters, Arts and Sciences delivered the keynote address and was among seven initiates from the ranks of USC’s faculty and staff.

Several inductees, including 2017 salutatorian Jordan Kondo, spoke about how the academy had inspired fresh approaches to their studies.

“All of us here would agree that the Polymathic Academy has enhanced our majors,” Kondo said. “In my own experience as a pre-med I have been inspired to remain open-minded and explore. I have begun to see the interconnected patterns. I find myself wanting to know more and craving the opportunities to learn about other disciplines.”

Dean Catherine Quinlan of USC Libraries dedicated the induction ceremony to the memory of University Professor and California State Librarian Emeritus Kevin Starr, who served as founding director of the academy from 2010 to 2014.

“Kevin always put students first,” Dean Quinlan remembered. “He was generous with his time and intellect, a caring mentor, and a scholarly role model for countless Trojans pursing a life of the mind.”

Later that afternoon, the celebrations continued with the annual Wall of Scholars recognition ceremony.

Surrounded by the names of past honorees in Leavey Library’s Weingart Reading Room, Quinlan joined USC President C. L. Max Nikias, Skull and Dagger Society President Jerry Papazian ’77 and hundreds of family members, friends, faculty and staff in congratulating graduates who have won a national or international scholarship, or who have earned certain USC academic accolades.

The Skull and Dagger Society created the Wall of Scholars in 1995. Each year, the graduates’ names are etched into the wall’s glass panels.

Addressing the graduating students, Nikias called the wall “a tribute to your exceptional intellectual gifts and passionate devotion to the pursuit of knowledge and academic excellence.”

You have a unique place in the history of the University of Southern California.

“When you return to campus in a few months or in a few years or even a few decades you can always, always return to this place and this room,” he said. “And when you do you can proudly show your friends, your spouses, your families and even — if it takes you that long — your own grandchildren that you have a unique place in the history of the University of Southern California.”

Although Doheny Library serves as the backdrop for the USC’s main commencement event, the USC Libraries are a constant presence throughout students’ entire scholarly journeys — a point Quinlan made in her welcoming remarks at the Wall of Scholars ceremony in Leavey Library.

“Every day—and night—of the academic year, students flock to our libraries at USC in pursuit of discoveries that will inspire a lifetime of intellectual curiosity and exploration,” Quinlan said. “Students find here — and in all 24 of our Trojan libraries — the people, collections, and support they need to achieve excellence in every school, every department, and every discipline on campus.”

Librarianship has been among those disciplines once again since 2013, thanks to a partnership between the USC Libraries and the USC Marshall School of Business: the USC Master of Management in Library and Information Science program.

On May 12, Doheny Library hosted a luncheon to honor the most recent graduates of the unique online program, which reintroduced librarianship as a field of study at USC after a 27-year absence.

Gary Shaffer, director of the program and a USC Marshall professor, presented Erin Rivero with the Ken Haycock Award for Leadership (named after the program’s inaugural director), and Quinlan presented Cheryl Cox and Nicole Olsen with the Dean’s Award of Academic Achievement. California State Librarian Greg Lucas joined Shaffer and Quinlan in congratulating the graduating class, the program’s third.

✌ Class of 2017: The university is a key partner in the national scholarship program, which has awarded more than $1 billion to 20,000 students since 1999.