Most service members leaving the military and returning to the San Francisco Bay Area aren’t prepared for the transition home and have a range of needs that can’t be addressed by a single organization, according to a new study from the USC Suzanne Dworak-Peck School of Social Work. 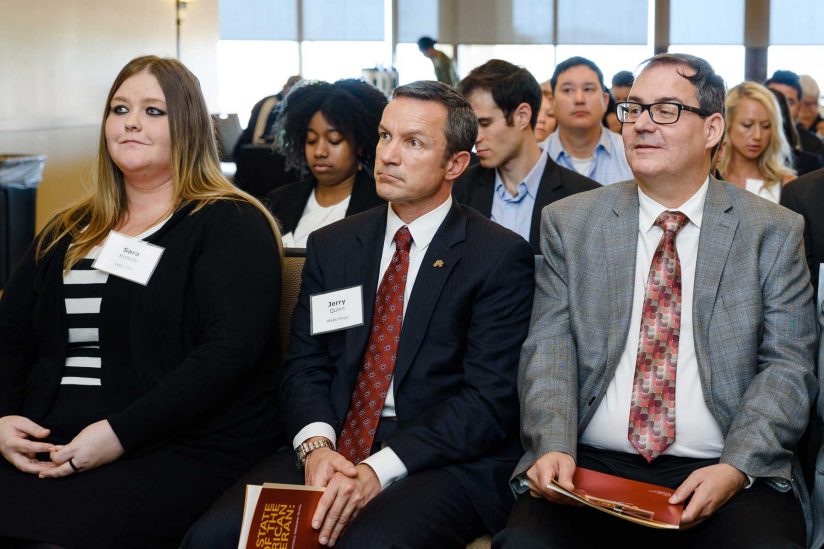 Sara Kintzle, Jerry Quinn and Carl Castro, from left, at the release of the San Francisco Veterans Study. (Photo/Harry A. Haryanto)

“The State of the American Veteran: The San Francisco Veterans Study” is the fourth comprehensive research study of a local military population — and third in California — conducted by the school’s Center for Innovation and Research on Veterans & Military Families. The report outlines the findings of a survey conducted last year of 722 veterans living in San Francisco and the Bay Area.

Nearly three-quarters of all veterans surveyed reported difficulties adjusting to civilian life, with 80 percent of recent veterans who served after 9/11 reported needing time to figure out what they wanted to do after the military and that civilians don’t understand their problems.

“We are identifying the issues across the nation that need urgent attention,” said lead author Carl Castro, associate professor and director of the center. “What we know after all these studies is that civilian transition is not a singular issue. It’s not simply looking at housing, employment or health. It’s looking at all of them at once.”

The lack of preparedness when leaving the military has been seen among veterans across all four USC studies, in Los Angeles, Orange County, Chicago and now San Francisco; however, when compared to their peers across the state, San Francisco’s post-9/11 veterans fared worse on a number of measures:

The study found substantial barriers that have prevented veterans from seeking help. As a result, about half of veterans with significant health issues were not receiving care.

Veterans reported not knowing where to get help and that when they did, it was difficult to schedule an appointment. If they got an appointment, often their work situation didn’t allow time off for treatment.

San Francisco veterans with a non-honorable discharge status comprised 30 percent of those surveyed, almost three times the rate seen in the other USC studies. These veterans enter civilian life at a distinct disadvantage since most of the benefits service members receive are tied to discharge status. As such, San Francisco’s veterans without an honorable discharge experienced much greater difficulty in nearly every area assessed, including employment, health, housing and finances.

The study also found that the San Francisco community is unprepared to meet the needs of its veterans.

Gerard Choucroun, director of veterans programs at the Presidio Trust, a federal agency overseeing a national park and former U.S. Army military fort in San Francisco, said the new report was eye-opening, especially for all the nonprofits and key stakeholders in the area.

We need to be brave and face our flaws as a community.

“We need to be brave and face our flaws as a community,” he said. “We may individually be doing an amazing job, but collectively something is missing.”

Key among the report’s recommendations was the development of a community network to provide comprehensive and holistic support to the area’s veterans. It also recommends tailoring a community-based public-awareness campaign to address stigma and other barriers to care.

The study was supported by funding from Wells Fargo, Deloitte and Prudential.

Vets concerned that employers and co-workers may assume they have PTSD or are prone to violence, researcher says.

Brothers in arms: An American veteran and the Iraqi who saved his life

A former U.S. infantry commander thought a few phone calls would rescue his friend. Instead, he found a series of obstacles steeped in outdated policy.

The Steven A. Cohen Military Family Clinic offers free care to vets and families dealing with PTSD and other issues.

A $15.7 million gift from philanthropist Steven A. Cohen brings free mental health services to military veterans and their families.

Bay Area veterans in bad shape: Many are jobless, homeless, depressed or suicidal