Radovich is the model aircraft team’s academic adviser and senior lecturer in the Department of Aerospace and Mechanical Engineering at the USC Viterbi School of Engineering.

“I couldn’t have had more faith in them,” he said.

And that faith turned out to be justified — the team took home first place in April.

Each spring, the American Institute of Aeronautics and Astronautics, in collaboration with Cessna and Raytheon Missile Systems, hosts the Design Build Fly student competition in which nearly 100 teams from all over the world are invited to test the capabilities of their homemade radio-controlled aircraft.

“If you do your job and you do it well, then you should be competitive,” said Aaron VanLandingham, the team’s project manager and senior aerospace engineering student. “I think we were optimistic, but it was really kind of surreal to win.”

A payload of pucks

Throughout the academic year, students are tasked with designing and fabricating an unmanned, electric airplane that meets the design requirements and performance objectives of that year’s competition. 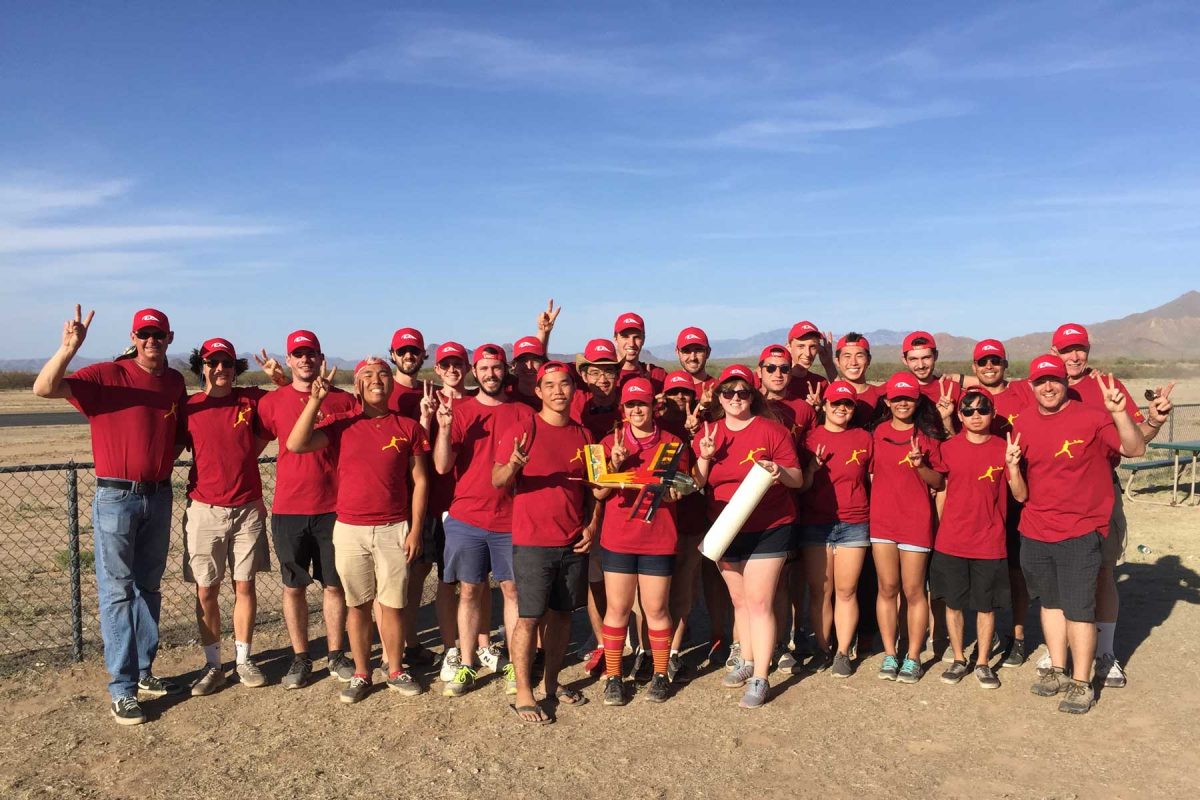 This year, the students were faced with the challenge of building a plane that could fold up and fit into a storage tube, while minimizing the system’s overall weight. The plane had to be able carry a payload of hockey pucks during its flights and the tube, which they were tasked with creating as well, had to survive several drops from a height of 1 foot.

In addition, the plane had to be hand-launched, requiring a student to throw the plane like a dart in order to achieve takeoff. This was particularly challenging for the AeroDesign Team, which determined that a smaller, lightweight plane would have a better chance of winning.

“We did the score analysis and decided that you needed to fly three pucks — that a small, fast plan was going to score the highest,” VanLandingham said.

The compact design, including a shorter wingspan and fuselage, made hand launching the plane much more difficult. At its Critical Design Review in January, the team was still struggling to get consistent throws and takeoffs.

“After going through a few failed test flights, we had a group of about five or six people meet regularly to practice throwing planes and work on having a reliable throwing technique,” said William Brogan, the team’s official thrower and graduate aerospace engineering student. “I think the support from the team, as well as the practice that we put in, really helped because we didn’t have any crashes on the launch while at competition.”

While there were no issues with the launch, the team did experience a crash during its first attempt at the speed mission, in which the plane nosedived into the ground and broke apart.

“It crashed well. Only the fuselage was totaled; everything else was fine. I think we were fairly fortunate it was just that,” VanLandingham said. “It’s kind of a combination of luck and what other people bring that gets you first.”

Luck indeed played a role in this year’s victory.

“It would have been one of those chase-your-tail kind of nights,” Radovich said. “Rebuild your plane from scratch, not knowing exactly why we crashed.”

However, a photographer captured the team’s plane midflight before the crash, showing that a fairing used to minimize drag had come loose and was preventing the plane from stabilizing. After salvaging the majority of the components and replacing the fuselage, the team knew that securing the fairing would correct the problem.

The next day, the team completed the speed mission in 115 seconds and flew six laps during the endurance mission. At the end of the weekend, the teammates found themselves just 0.07 points above Georgia Tech, securing first place.

The team’s win is a testament to what an incredible effort was put in all year long.

“The team’s win this year is a testament to what an incredible effort was put in all year long,” said Addison Salzman, the team’s analysis captain and senior aerospace engineering student. “The competition was extremely close — our margin of victory was the smallest I can remember and there were quite a few clever designs — but I credit our victory to the team’s preparedness and ability to persevere through the setbacks we encountered.”

The franchise has a long history at model aircraft competitions since Professor Ron Blackwelder created the team over 25 years ago, along with Adjunct Professor Blaine Rawdon and Adjunct Assistant Professor Mark Page. The founding member of the team was Wyatt Sadler, a student at the time who has continued working with the team as pilot and industry adviser.

In addition to his work with USC’s team, Sadler, an aeromechanical systems engineer for AeroVironment, is often requested to pilot the planes of other schools during competition.

“Wyatt’s contribution to the event was nothing short of impressive,” Radovich said. “He piloted for a personal-best 18 teams, which is somewhere close to one-third of the teams that flew.”

After graduation, VanLandingham and Salzman will begin work at The Boeing Co. in Long Beach and Seattle, respectively. Other graduating seniors include Tyler Egami, the team’s chief engineer, who will work at the Pearl Harbor Naval Shipyard.

“All the design teams at USC prepare you for your respective industry position. Obviously, it’s different scales and different problems, but the problem-solving skills that you learn definitely do apply,” VanLandingham said. “Being able to fit a high-performing plane inside a small tube and do that well — I think that was the success of the year.”

Record-breaking flight: USC students’ rocket shoots up, up and away

At 144,000 feet, it’s believed to be the highest altitude achieved worldwide for a vehicle designed and manufactured by students.

Turbulence ahead for USC team: How to control hypersonic airflow