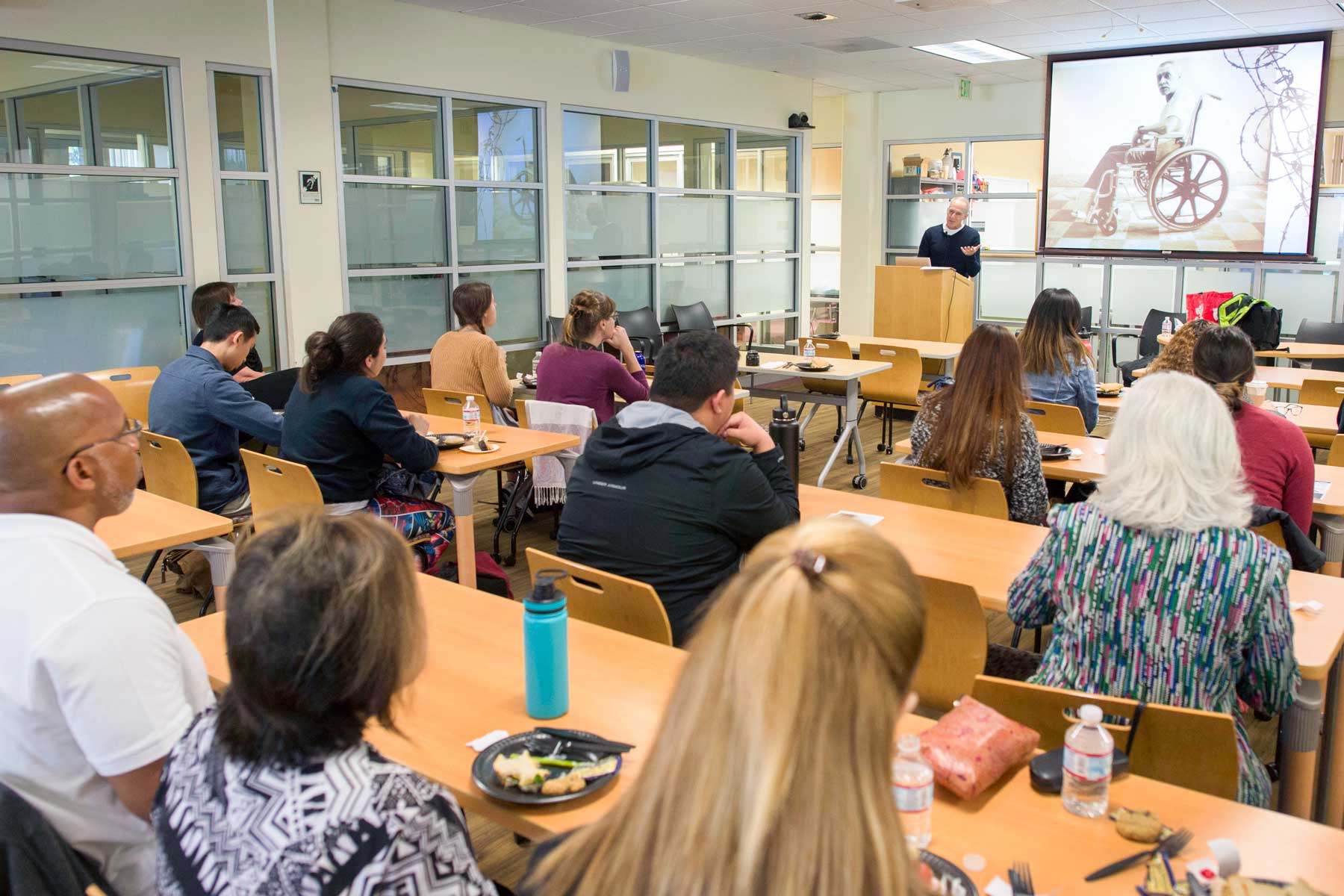 Photographer Ron Levine’s portraits of aging prisoners give viewers a look at the effects of incarceration. (Photo/Andrew Taylor)

“This a voiceless population,” said Hongo, a life skills instructor at Five Keys Charter School and a research fellow at the USC Edward R. Roybal Institute on Aging.

Hongo emailed Levine asking for permission to use his photos for her paper for a class taught by Anne Katz, a clinical professor at the USC Suzanne Dworak-Peck School of Social Work and an affiliated faculty member of the USC Roybal Institute. He enthusiastically agreed.

Ever since, Hongo and Katz have kept in touch with Levine and given presentations with him at conferences across the United States on criminal justice issues related to older incarcerated individuals.

“We present the research information,” Hongo said. “His photos help bring the concepts that we want to convey to life.”

Levine’s exhibit of geriatric inmates titled Prisoners of Age has received international acclaim and was recently on display at the school’s Social Work Center. The exhibition was organized by Katz and Clinical Associate Professor Michal Sela-Amit.

“The stories of these people are so important,” Levine said at a presentation of his work at the school. “Nobody knows about these elderly. Nobody realizes that they’re in prison.”

Levine’s exhibit has taken him around the world to venues like The National Archives of Canada in Ottawa, Ontario, and former prisons such as the Alcatraz Federal Penitentiary in San Francisco.

The series of photographs and interviews with older inmates — both male and female — and corrections personnel have been conducted in prisons in the United States and Canada since 1996. His photos spawned a 208-page companion book, as well as a documentary that explores the issues facing aging offenders and the complexity of the criminal justice system.

Thanks to a connection from Hongo, Levine had the opportunity to photograph female prisoners.

Katz added that there is very little research on female inmates, but many come from difficult family circumstances with a history of trauma and abuse.

“When people see photos of the women, it’s even more impactful,” Katz said. “Some of the women look like they could be your grandmother.”

“You get a mix of people who are remorseful and those who are not,” Levine said. “When I photograph them, it’s the same as when I do my corporate photography. I shoot them with dignity and respect.”

Aging with nowhere to go

Federal data from the Bureau of Justice Statistics of the U.S. Department of Justice shows that from 1999 to 2014, the number of state and federal prisoners age 55 or older increased 250 percent. The number of prisoners younger than age 55 grew only 8 percent in the same period.

Many factors account for this growth, including longer prison sentences and more life sentences. Correctional and parole officials also have little legal authority to release older prisoners — many of whom are in poor health — before their sentences expire.

About 73 percent of state and federal prisoners age 50 or older have a chronic medical condition, according to Bureau of Justice Statistics data.

“One of the wardens told us that these guys are like toothless tigers,” Levine said. “They talk a good talk, but they can’t do a lot of stuff.”

Though someone at age 50 would not be considered old in the eyes of the general public, experts say that incarcerated men and women may have physiological and mental health conditions that are associated with people who are much older.

“A lot of times prison staff think they’re being ornery or not following the rules,” Katz said. “People in corrections don’t know that that person might have dementia.”

In California, for example, expenditures for an inmate age 55 or older is two to three times more than that of a younger inmate, according to a report from the California Legislative Analyst’s Office.

“The cost to the taxpayers is so insane,” Levine said. “There’s got to be a better way.”

Even so, Levine said that he is not taking a political stance such as calling for the early release of prisoners. He instead hopes his exhibits open up a conversation on how society views justice.

At gatherings such as the American Correctional Association Congress of Corrections, Katz, Hongo and Levine hear from prison wardens who understand the significance of their work.

“When you sit down and hear their stories, it’s a different world,” Hongo said.

Aileen Hongo calls them ladies. This small act of politeness may seem like nothing to most people. But as she sits in a folding chair next to these women, Hongo recognizes that for many of them, even the most basic courtesies may be all that they will ever know.

USC Dornsife instructors explain how the project has been meaningful for them.

In exchange for helping their elderly neighbors, a group of USC gerontology students gets free room and board — and much more.