Paul Lauridsen is a year away from earning his bachelor’s degree, but the chemistry major is already working on the front lines of USC efforts to turn greenhouse gas into methanol fuel.

Lauridsen spends 10-plus hours a week conducting research on transition metal catalysis in an organometallics lab. He considers this experience crucial to feeding his passion for chemistry and guiding his plans to attend graduate school.

The work underway in the USC Loker Hydrocarbon Research Institute is also helping solve one of the world’s biggest challenges — the clean generation and storage of renewable energy.

Lauridsen is one of several undergraduates performing research under the mentorship of Travis J. Williams, associate professor of chemistry at the USC Dornsife College of Letters, Arts and Sciences. He earns class credit and a stipend as well as something he considers priceless: bona fide research experience.

So far, the group has identified and shown that certain complexes can interconvert harmful carbon dioxide and formic acid, an intermediate step. Development of these complexes is enabling new options to push the needle toward total conversion to methanol.

“We have a couple of undergrads who behave like graduate students and postdocs,” said Williams, who has enthusiastically mentored 15 undergraduate researchers since 2007. He also spurs them to attend scientific conferences and seminars and participate in writing scientific papers. “External experience is important and learning how to communicate science is critical.”

Williams speaks from his own personal experience gained at Caltech, another high-profile research university.

“When I was an undergraduate, I got unfettered access to the leaders in the chemistry community, and it’s through programs like this we create that environment here.”

Another undergraduate working in the Williams lab is Elyse Kedzie.

“One of the things that drew me to USC is that it’s a huge research university with professors distinguished in their fields doing cutting-edge research. So I wanted to tap into that.”

The chemical engineering major has worked five to 10 hours a week in the Williams lab since 2015. Early on, Kedzie did online research to learn more about what USC professors were studying and researching with applications to her interest in developing sustainable energy technology.

“And I saw that [Williams] does a lot of energy storage reaction chemistry, which is something I wanted to study, so it was a perfect fit.”

Kedzie emailed the professor and asked if she could get involved in a project. Kedzie received a summer research fellowship through the USC Provost’s Undergraduate Research Fellowship (PURF) program. 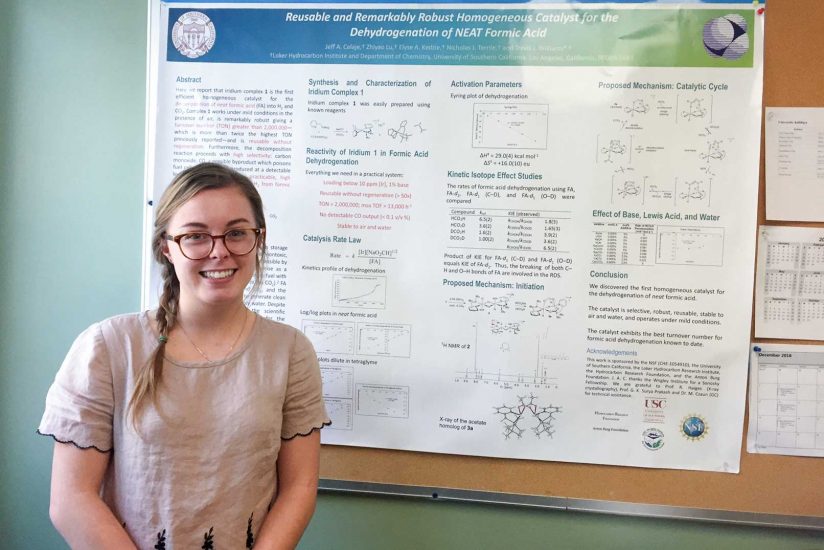 Elyse Kedzie has won several prizes for her poster presentations and was named a 2017 NSF Research Fellow. (Photo/Rhonda Hillbery)

After being introduced to the lab and its procedures, she performed kinetic studies and rate measurements, then moved on to performing more complex procedures. Her steady progress has boosted her confidence as well as her determination to build a career in research.

That’s just what the fellowships are intended to bolster, along with research mastery. PURFs are highly competitive and offered three times a year to juniors and seniors, said David Glasgow, assistant vice provost, undergraduate programs. The program started out in the summer of 2007 with 11 students. In spring 2017, 176 students applied and 150 were funded in departments across USC.

“I was initially shocked to get the USC award. That boosted my confidence and I thought, ‘I’m actually OK at this!’”

In late 2016, Kedzie grabbed third-place honors in reaction engineering for a poster presentation at the American Institute of Chemical Engineers annual meeting, in competition with graduate students and postdocs. It was the first national conference she had ever attended.

Her soaring trajectory continues on news that she landed a 2017 National Science Foundation Graduate Research Fellowship. One of 24 USC students and alumni to receive the award this year, she will attend the University of California, Berkeley starting this fall to pursue a PhD in chemical engineering.

The undergraduate research experience is about much more than donning a lab coat and setting out to catalyze reactions. It’s about public speaking, networking and other “soft skills” developed on the path to becoming a scientist.

The success of the program snowballs and attracts repeat applications from disciplines across USC, especially in the health sciences, engineering, chemistry, biology and psychology, he said.

Communicating science on a big stage

Lisa Kam is a biochemistry major who started working in the Williams lab in spring 2015, grabbing hold of a steep learning curve and refusing to let go.

“We crack syntheses problems in group meetings,” Kam said. “We strive to understand how and why things work. Professor Williams, especially, is the kind of person who studies science for the sake of science, and that passion shows through in our lab.”

Despite the challenges of juggling lab hours with a full course load, Kam has also delivered high-profile scientific presentations outside the lab. Among them was a 20-minute presentation about ammonia borane hydrogenation, an approach to enable hydrogen-based vehicles, at the American Chemical Society national meeting this April. “It was a nerve-wracking moment, standing in front of 20-plus professionals, professors and grad students in the audience, but it’s a memory I definitely won’t forget.”

With an eye to attending medical school, this summer she’ll be working full time on a collaboration project between the Williams lab and Children’s Hospital Los Angeles. The project aims to synthesize new target-specific probes for USC’s new mass cytometry core lab.

And Kam has found success, winning multiple poster awards, both on campus and off. She’s already published three scientific journal articles, co-written with one of her graduate student mentors.

Perhaps ironically, her success has led her to a better understanding of failure, the kind that’s central to science and the scientific method.

“After the 99 times an experiment fails comes that one time it actually works, and you can leave lab satisfied knowing that you’ve created something innovative. Then you toughen up and repeat the cycle. No sugarcoating it: Lab work is grueling, but it makes success that much sweeter.”

In 1963, a burning question kept invading the mind of a young kibbutznik studying chemistry at the Technion-Israel Institute of Technology in Haifa.

Richard Brutchey, assistant professor of chemistry at the USC Dornsife College of Letters, Arts and Sciences, was lauded for his work as a researcher by ChemComm, a leading chemical sciences journal published by the Royal Society of Chemistry.