High school students with iPads that displayed local landmarks were prepared to present proposals on how to improve their beloved neighborhood.

This was the second year of the “Greetings from East L.A.” collaboration between USC Price, the East Los Angeles Renaissance Academy (ELARA) and the social enterprise nonprofit Public Matters. The asset-mapping project tasks students with examining the main corridors of their communities, deciding on ways they could be improved and determining how to make those enhancements.

With the help of a USC Price undergraduate team, the young students from ELARA at Esteban Torres High School re-imagined their local streets and presented their visions for a better East L.A.

USC Price students Alex Kanegawa, David Roachford and Marina Salazar went to ELARA classes during the past school year to provide advice on the projects and serve as role models, and then the high school students had the opportunity on April 25 to come to the USC University Park Campus — most for the first time — and present their projects to faculty, staff and students.

“In our classes, we don’t really get a chance to interact with people from different neighborhoods, and definitely don’t talk to high schoolers,” Roachford said. “It was really cool to hear from them about what they thought about their community and see what things they wanted to do to improve it.” 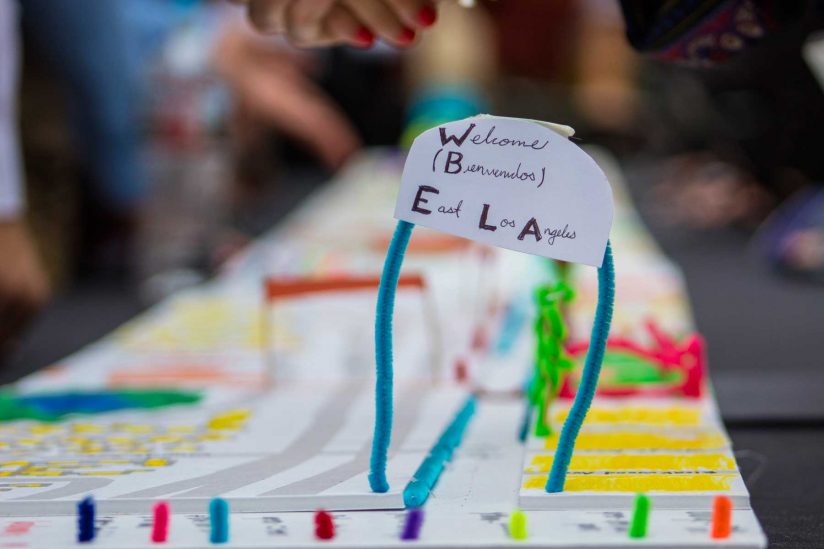 “I didn’t know much about Price or that there was a whole school at USC dedicated toward urban planning,” said Alfredo Jimenez, a senior at ELARA. “It made me feel better about being in my academy, that it’s preparing us for this.”

ELARA is one of only three high schools in the country with an urban planning track, making it a natural fit for a joint effort with USC Price.

“One of the things we have become increasingly aware of is that if we’re trying to support students from underserved communities, we can’t start after they are admitted,” said John Sonego, associate dean for development and external relations at USC Price. “We need to begin to reach them in high school, to expose them to the potential careers and vocations that can come through a degree from Price.”

The experience was equally as valuable for the USC Price students, who, through internships with Public Matters, learned as much from the ELARA students as they taught them.

“Discussing the issues with them — they know their home better than anybody else,” Salazar said.

Professor David Sloane, the faculty member who leads the ELARA partnership, noted that too often professional and prospective planners in Los Angeles focus on downtown when there are rich and complicated issues going on in other areas.

“When you look at what they did — they want trees, they want benches, they want water fountains and safer ways to get to school,” Sloane said. “They want the basic pieces of a good community that many other communities take for granted. So their idea of what is crucial is really great for all the Price planning students to hear.”

This year’s group of 85 participants from ELARA was more than twice as large as the inaugural program. While the first year included one class of seniors, this time juniors and sophomores were added.

Sloane indicated that this was done to educate the students about USC prior to the college application process after finding out last year that no one from ELARA had ever attended the university.

“If they’re going to get to USC, we needed to get to them a little earlier and make it clear that USC is a possibility,” Sloane said.

“The endeavor holds great value for the school because it provides a platform for our students to communicate their vision and voice about East Los Angeles, and to project the community’s uniqueness to those who may not know it as well as our students do,” said ELARA Principal Martin Buchman.

The USC Price students were excited to see high school kids with a passion for urban planning.

“I wish I’d had this kind of opportunity when I went to high school,” Kanegawa said. “It’s a valuable set of tools. I would have understood so much more about the world around me because it brings together all these different sectors like environmental and social justice. Even if these kids don’t take urban planning as a major, it will still be valuable wherever they go and whatever they decide to do.”

Video presentations of the projects can be viewed at the Los Angeles Times High School Insider. In addition, the ELARA student presentations were covered by Univision.

Ron Mackovich of USC Communications contributed to this report.

Students discuss local landmarks and explain why they’re important to the community as part of a first-time partnership with USC Price.

The USC Neighborhood Academic Initiative will expand beyond South Los Angeles to include more than 100 sixth-graders near the university’s Health Sciences Campus in East Los Angeles.

Judy Muro didn’t think that helping some children at the YMCA would lead to something as big as a trip to the White House – but it did.