Standing beneath the neon sign of a mermaid, senior Maddy Hinck bit into a ceviche verde made with wild Mexican shrimp and served to her by chef Fernando Villagomez, owner of La Tostaderia, a popular seafood counter at the bustling Grand Central Market in downtown Los Angeles.

Hinck, who is majoring in political science with a minor in business finance and Spanish at the USC Dornsife College of Letters, Arts and Sciences, was touring the historic market as part of  “Latino Food Culture in Los Angeles,” an undergraduate course taught by Sarah Portnoy.

Portnoy leads innovative courses teaching Spanish through the lens of Latino food culture and food justice. She said she brought her students to Grand Central, so they could sample the old and new flavors that make up the market.

Grand Central is one of the best food representations of L.A.’s diverse food culture.

“Grand Central is one of the best food representations of L.A.’s diverse food culture, so I thought it was important to bring the students here,” Portnoy said, as she led the group through stands of mouthwatering Latino food offerings.

Earlier, Hinck and her classmates had sampled mole (pronounced moh-lay), a dark base sometimes containing chocolate used to create rich and flavorful sauces in traditional Mexican cooking. They also tasted Salvadorian pupusas — thick, handmade corn tortillas stuffed with beans and cheese or meat and other ingredients.

Now they were listening as Portnoy, assistant professor (teaching) of Spanish, explained — in Spanish — how Villagomez, who opened a traditional carnitas restaurant in the market in 2008, had added the more expensive seafood stand in 2015 to appeal to Grand Central’s changing clientele.

The market — which is celebrating its 100th anniversary this year — is becoming increasingly gentrified as it appeals to a wider demographic. Villagomez explained why he is also taking advantage of the market’s evolution to appeal to new customers and answered students’ questions about his thriving restaurants, also speaking entirely in Spanish.

Hinck said she loves learning about Latino culture and Spanish through the perspective of food.

“One of the things I like so much about L.A. is its vibrant Latino culture, which is really unique, especially for me as I come from Minnesota where we don’t have that,” she said. “I’ve always wanted to improve my language skills, and this course is an excellent way to take what we learn in the classroom and use our Spanish out in the real world.”

Readers eat it up

Tracing the culinary history of Grand Central Market is just one weapon in Portnoy’s gustatory arsenal when it comes to teaching.

Another is her new book, Food, Health and Culture in Latino Los Angeles (Rowman & Littlefield, 2016), which explores both the city’s colorful history of Latino cuisine and the contemporary Latino food scene — one that sharply contrasts with urban Latino neighborhoods where access to affordable, healthy food is a struggle. 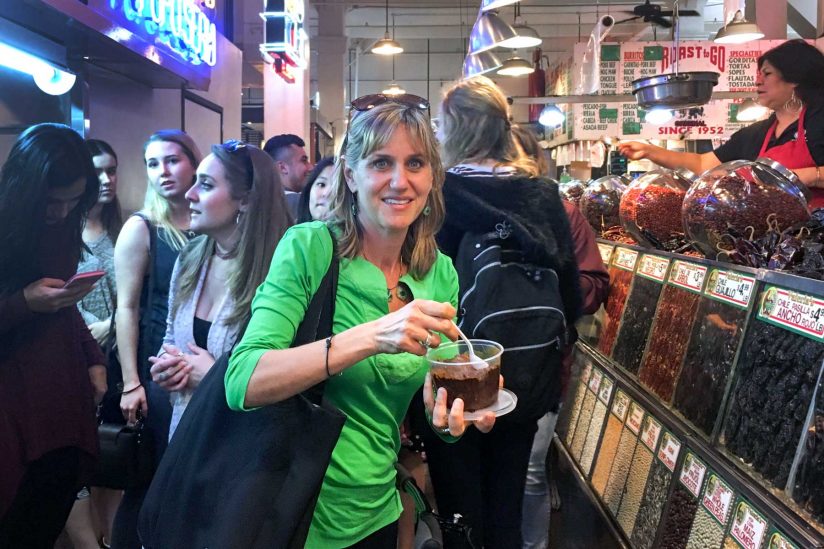 This underserved side of Los Angeles, far from the city’s glamorous image but a daily reality for many, is the aspect of the city that inspired Portnoy to teach food justice through community-based courses.

In her book, Portnoy traces L.A.’s hardworking street vendors and loncheros (Latino food truck owners), community garden activists, the grassroots work of local nonprofit organizers and a host of the city’s Latino and Alta California chefs. She also offers solutions, such as expanding urban agriculture and legalizing street vendors. Her article on L.A. street vendors’ battle for legal status was recently published as a front page story in LA Weekly.

Students in Portnoy’s “Latino Food Justice” course have the opportunity to get involved by interning with local nonprofits, such as Garden School Foundation and Seeds of Hope, organizations that work to educate about nutrition and create access to healthy food through school gardens, community gardens and cooking classes, as well as nonprofits like Groceryships that work to improve nutrition and access through a support system.

Back at Grand Central Market, Hinck said taking the USC course enabled her to fulfill a long-standing ambition: to create a food blog.

Written in Spanish, the students’ blogs are a class requirement. Hinck said she found it particularly exciting to be able to give her father back in Minnesota a taste of her life in L.A. by sharing her blog with him.

“This is the most tangible classwork I’ve been able to share with my family,” she said. “Learning the history of Latino cuisine and talking to chefs and restaurant owners who have such a deep love for the food has given me a greater appreciation for it.”

From quesadillas to pupusas: Students eat up Latino culture