John O’Brien, executive vice dean of the USC Viterbi School of Engineering, died March 31. He was 48. 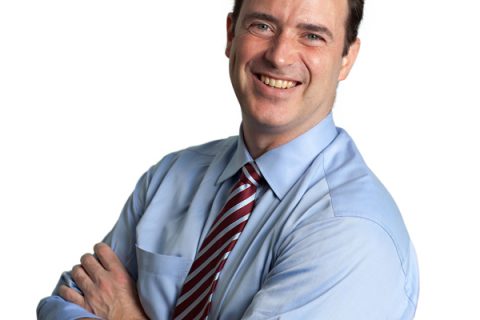 “In his relatively short but brilliant career, John was an outstanding scientist and engineer, a superb administrator, but above all a remarkable human being,” Dean Yannis C. Yortsos wrote in a memo to the USC Viterbi faculty and staff. “His loss will be deeply felt across all aspects of USC Viterbi, from student and faculty recruitment to academic programs, to research and mentoring and to strategic directions.

“But most importantly, John’s lasting legacy will be that he helped establish in the school a remarkable culture of collaboration and inclusion, one based on character and ethics, respect and understanding, selflessness and kindness, service and commitment, and the constant pursuit of excellence.”

He joined USC in 1997 as assistant professor, rose rapidly through the ranks and was promoted to full professor of electrical engineering in 2006. He joined the dean’s office in 2006 as senior associate dean for academic affairs and was appointed as the first USC Viterbi executive vice dean in 2011.

In 1999, he received the coveted Presidential Early Career Award for Scientists and Engineers, the U.S. government’s highest award for scientists and engineers in the early stages of their independent research careers, as well as a 2000 National Science Foundation Career Award.

O’Brien worked closely with many faculty, department chairs and staff to advance USC Viterbi in its multiple endeavors. In particular, he was instrumental in coordinating student recruitment and academic programs across USC Viterbi.

“He was one of the kindest individuals I have known, always with a ready smile, easy laugh and quick wit,” said Louise A. Yates, USC Viterbi senior associate dean for admissions and student affairs. “He was respectful in each and every interaction, regardless of who you were. It can easily be said that all of us were better people as a result of our interactions with John.”

“John was not only a colleague I deeply respected, but a very dear friend,” said Kelly Goulis, USC Viterbi senior associate dean of graduate and professional programs. “He embodied all of the very best qualities. He was brilliant, conscientious, sincere, caring, fun-loving – the list is endless.”

A senior member of the Institute of Electrical and Electronics Engineers, his research interests were in nanophotonics and photonic crystal devices. Over the years, O’Brien developed new courses for the USC Viterbi School in electrical engineering topics ranging from EE 509 Electromagnetics for Semiconductor Photonics to EE 599 Advanced Quantum Mechanics.

“John’s passing is a tragic loss for me and for all of his colleagues at USC,” said his mentor and colleague, Professor Dan Dapkus. “John was always intellectually honest and deep in his approach to the technical problems we studied together. I learned a great deal from him. He was also a wonderful mentor to his students – demonstrating and expecting excellence – yet always available to share his knowledge and insights. Working with him has been a high point in my career at USC.”

A USC Viterbi event celebrating O’Brien’s life will be held in the next few weeks.

USC Annenberg and USC Viterbi join to report on accident-prone roadways and the worst interchanges.

The downtown L.A. facility will provide students with firsthand experience in advanced technologies.

Here’s a way to produce nanomaterials on a larger scale

Researchers create a system that can hike production of the smallest — but among the most useful — materials of this century.

The next generation of chess is here, and it involves quantum mechanics

There’s a new way to play the classic board game, but you don’t have to be Stephen Hawking to understand it.