Nearly 20 reporters are getting to work, their newsroom in a back room of a former hospital. Before taking a seat at their desks, they grab some tamales and coffee that had been put out.

They need caffeine. It’s 4 p.m. on a Tuesday, and they’re coming off a full day of school and on deadline for their next edition.

They’re the reporters for Boyle Heights Beat, a bilingual youth newspaper that covers the predominantly Latino neighborhood of Boyle Heights, which sits just south of downtown Los Angeles. Outsiders might know its famed Mariachi Plaza, a spot where Mexican musicians have played for decades.

It’s an area that seemed undercovered before the paper launched in 2010, editors say.

“The community took to us pretty quickly,” said Kris Rivera, a Boyle Heights Beat senior editor. “I think we filled a hole. There wasn’t a lot of media attention in this community unless it was negative by major media … Now we definitely have proven ourselves as a media source.” 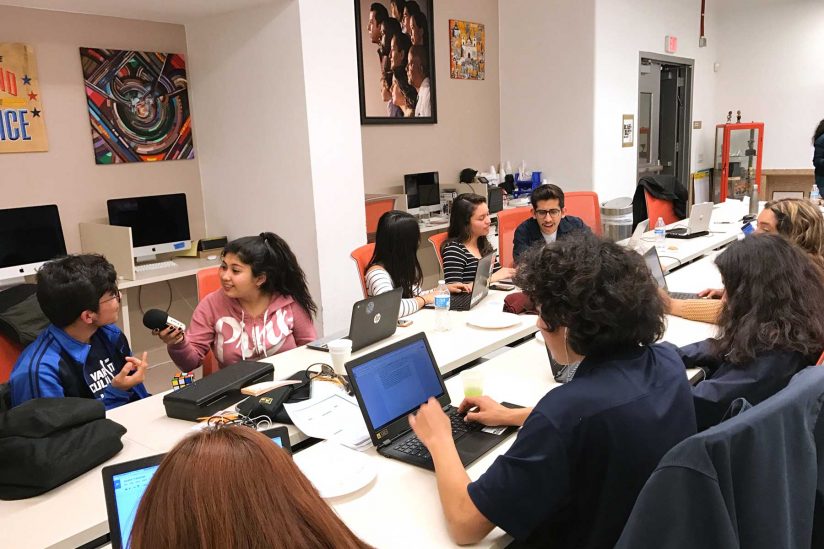 Many of the major news outlets swoop in to cover crime or the current hot-button issue of gentrification. Boyle Heights Beat reporters are there to cover that, too, along with the local art walk or when a business closes. They tackle heavy topics, such as crime, immigration and mental health.

They come to the newsroom for meetings twice a week to touch base, learn journalism tricks and get feedback on stories. They get one-on-one mentoring.

And on top of that, they make time for their reporting.

Reporter Samantha Silva, 17, is juggling a lot. She’s taking Advanced Placement classes and is on the dance team, swim team and in multiple clubs. Sometimes, due to dance practice, she starts her day at 4 a.m. and isn’t home until 7:30 p.m.

“I usually try to let them know I’m a high school student — they get the hint that I can’t talk until after 3 p.m.,” she said. But when she’s not in class — on her break, at lunch, after school and on weekends — she’s making calls.

She’s currently interviewing teachers for a story about their financial struggles. In the past, she’s reported on homeless initiatives and interviewed the family of a man slain by police.

“It lets me realize more about what’s going on in my community while also educating others,” Silva said.

Michelle Levander, director of the USC Annenberg Center for Health Journalism, and former La Opinión Executive Editor Pedro Rojas started the paper in 2010 as a way to train youth but also serve an underreported community.

The community takes them seriously, too. When Eric Garcetti was elected mayor in 2013, Boyle Heights Beat was his first stop.

“People really trust these young people to tell their stories and the young people feel this tremendous sense of responsibility to share their concerns,” said Levander, co-editor and publisher.

The reporters solicit stories directly from the neighborhood, inviting the community to meetings after an edition prints each quarter. They held one in January — offering hot chocolate and tamales — and despite heavy rain, nearly 100 people showed up.

Reporter Libertad Gonzalez, who considers herself shy, offered to run that one.

“I took the initiative to step up,” Gonzalez, 16, said. ”I stood in front of the room. I was helping people ask questions. I think that helped me become a better speaker.”

She joined Boyle Heights Beat this year and said it’s made her more assertive.

“I think with reporting, it helps me become more confident,” she said. “I’m not really an outgoing person. I don’t like to raise my hand and answer questions. Now, with Boyle Heights Beat … I’m not so nervous about stating my opinion.”

Former reporters said what they learn at the paper sticks with them.

Jacqueline Ramirez, 20, is now a student at Santa Monica College. When assigned a paper about the effectiveness of standardized tests for a class, she didn’t just cite research. She put her reporter hat on, interviewing students and academics who know the issue firsthand.

“In order to find out information you need to go up to people and start asking them questions,” said Ramirez, who continues to help the paper with outreach. “You have to be curious.”

University honors staff, faculty who donate 1 percent of their salary to program that helps the neighborhoods around the school’s campuses.

From the boots up: Local workers get help from Trojans

Support from faculty, staff and friends leads to career advancement at USC Village.