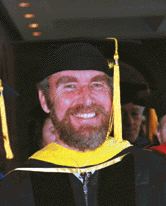 JEP director Dick Cone was honored with the USC Staff Achievement Award at the 1997 Convocation ceremony on March 4.

As a teacher in the Peace Corps, Dick Cone was the kind of educator who liked to tackle a problem school in some distant country, such as Iran or Jamaica, make a quick fix, then go somewhere new, carting his wife and small kids with him.

When Cone decided to return to the United States in 1976 to settle down, he took a job as curriculum development coordinator of USC’s Joint Educational Project, a budding program that combined academic learning with experience teaching in neighborhood schools. JEP posed challenges similar to those found in the foreign schools. The program was in chaos, and Cone figured out ways to make it work.

Unlike his other jobs, the JEP position presented constant challenges, and Cone stayed. After taking over as director in 1980, Cone ushered JEP through 15 years of growth, developing it into one of the finest models of service learning in the nation. This spring, he received the USC Staff Achievement Award for his work.

In the citation for the award, Cone was praised as “a visionary whose leadership and dedication to public service have made it possible for tens of thousands of students to serve their communities and to put into practice concepts they learned in the classroom.”

Also this spring, JEP is celebrating its 25th anniversary.

If the late Barbara Seaver Gardner created JEP 25 years ago, Cone has nurtured it into a high-quality program that draws equal praise from members of the university and the local public schools.

Gardner had the idea and set up the infrastructure for JEP, but “Dick has been the other half of the program’s success,” said Roderick McKenzie, a geography professor and one of the first faculty members to incorporate JEP into his classes.

“If Barbara could come back now and see JEP, she would recognize everything about it,” McKenzie said. “When she retired she was lucky to have someone as good as Dick Cone who could run with the program and keep the ideals there.”

While Gardner had the ideas, Cone, with his talent for problem-solving, made JEP last.

Passion for education is in his genes. Cone, who looks like a bearded onetime hippie from the 1960s, hails from a blue-collar family. Although his father couldn’t read (Cone thinks his father suffered from dyslexia), he was a staunch advocate of education.

“My father always said that education is the most important thing,” Cone recalls.

After graduating from Cal State Long Beach, Cone and his wife, Jean, went into the Peace Corps as teachers, honing their craft in classrooms in Brazil, Iran and Jamaica, among other places. While on the road, they started a family.

“I liked traveling about. I would go into a situation that would be upside-down, change things around and leave,” he said.

By the time his wife was due with their fourth child, Cone decided it was time to come back to the U.S.

Cone discovered he had a passion for discovering how people learn, so he went back for master’s and doctoral degrees from UCLA in educational psychology.

Cone believes JEP provides the perfect marriage between academic learning and service to the community. He notes that President Clinton’s latest initiative, America Reads, derives from the same concept that underlies JEP.

“It’s the notion that one of the resources our society has not tapped very well is the human resource,” Cone said. “Not since the Roosevelt days have we thought about how to use human resources instead of trying to buy our way out of problems.”

Dick Cone Honored for His Dedication to JEP’s Educational Mission