For his first stand-up class at USC, Steve Macario was given a task. Get to know the comic Margaret Cho inside and out.

He loves her work, so it wasn’t hard to do the research and come up with a class presentation for his midterm.

And then on Friday, he found himself sitting across from her.

“I was like ‘I know this woman,’” Macario, a sophomore studying theater, said with a laugh. 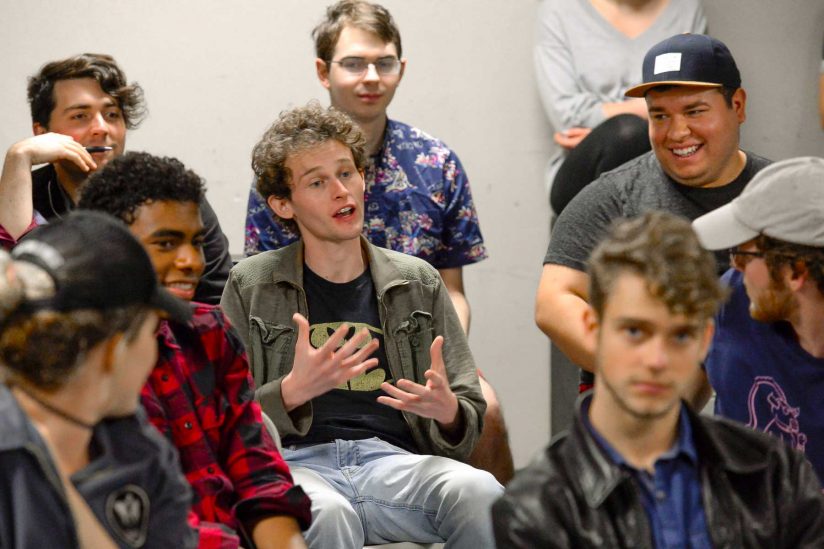 Cho, who has an upcoming, sold-out tour stop at the Largo, had stopped by the University Park Campus to speak to stand-up comedy students out at the USC School of Dramatic Arts.

Sitting in a chair in the front of a small classroom with a couple dozen students, she shared tales of seeing Robin Williams perform at the Holy City Zoo, a club across the street from her in San Francisco.

“He would come over from Marin on his bike and do a set there every night,” she said. “We would watch Robin every day, every night.”

She started doing stand-up when she was a teenager, doing open-mic nights and whatever comedy acts she could get her hands on between odd jobs, like being a phone sex operator or a Raggedy Ann at FAO Schwarz.

“All of these little clubs, bar shows, kids theater shows, old folks homes — anything to get on stage,” she said.

When students asked how often she performed, the response was easy: “Every day. Every day without exception.”

Cho has opened for Jerry Seinfeld, was on a Bob Hope TV special and her sold-out tour “Notorious C.H.O.” was turned into a feature film for Showtime.

Some comics will buy jokes from other comics but she couldn’t, she said.

Nobody could figure out how to write jokes for me.

“Nobody could figure out how to write jokes for me,” she said.

She’s known for her intensely personal, frank style — she jokes about everything from sex to her relationship with her immigrant mother, who grew up in Korea.

“My jokes were always so weird, and personal, but also the way I get to something people don’t understand,” she said.

The comedy program at SDA is in its infancy, just a year old, and offers a comedy performance minor. There are two stand-up courses — introduction and advanced — taught by professionals such as Wayne Federman, who has performed on The Tonight Show, appeared on shows such as Curb Your Enthusiasm and was the former head monologue writer for Late Night with Jimmy Fallon.

“Part of our class is studying successful comedians, and not only learning from their experiences but also being inspired by them,” Federman said, who led the discussion with Cho. “To have an actual comedian come in — that they’ve studied and watched videos of — and see that they’re just a person, especially Margaret because she took a comedy class … which is exactly what they’re doing.”

Her class was a little different though — it was a house in San Francisco, a place where comedians would rent rooms, and also where voice actor Ron Lynch taught people stand-up for $35 over six weeks. Folks like Janeane Garofalo (Wet Hot American Summer) and Louis C.K. (FX’s Louie) stayed there.

She shared her favorite tip from that $35 class.

“Write jokes after you do a set because your mind is alive,” she said. “You never think to do that because you do a show and are out with your friends … go to your book and write more jokes.”