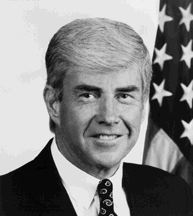 Although 1996 vice presidential candidate Jack Kemp is often remembered for his pre-politics career as a pro-football quarterback, he was not a stereotypical jock.

In the Buffalo Bills locker room, Kemp could be found reading Henry Thoreau and other philosophers. “Get rid of that darn book and get your mind on the game,” Coach Lou Sabin once told him.

In high school, Kemp plowed through thick history and philosophy books. As a politician, he has been known to quote Emile Zola, Aleksandr Solzhenitsyn and Alexis de Tocqueville.

So the audience at USC’s 114th commencement can expect at least a few scholarly references when Kemp delivers the main address and receives an honorary doctor of laws degree on Friday, May 9. USC is honoring Kemp for his leadership in national politics, his long commitment to advancing minority communities and his interest in Los Angeles minority issues.

Kemp said he was excited to learn he would be receiving the award at USC.

“It’s going to be a real emotional moment for Joanne and me, to be home and at USC.”

Kemp noted that USC President Steven B. Sample is an old friend, from the time when Sample was president of the State University of New York at Buffalo and Kemp was a congressman representing Buffalo and western New York. Also, Kemp said, trustee Herb Klein, who was largely responsible for Kemp’s entry into politics, stressed to him the importance of the event.

Kemp, a 1957 graduate of Occidental College in Eagle Rock, joked, “Imagine that, a P.E. major from Oxy getting a Ph.D. from USC. As Yogi Berra would say, some of my old professors of Western civilization, if they were alive today, would be turning over in their graves.”

Born and raised in Los Angeles, Kemp and his brothers worked for their father’s small trucking company downtown, learning about hard work and tolerance while toiling alongside a racially diverse crew. At home, his social worker mother instilled a love of ideas and intellectual challenge.

Kemp attended Fairfax High, a school that was 95 percent Jewish, and became a strong supporter of Jewish causes in later life.

He met his wife, Joanne, at Occidental College. After graduation, Kemp was signed and released by the Detroit Lions, and then played for several teams before being signed by the Los Angeles (later San Diego) Chargers in 1960. In 1963, Kemp led the Buffalo Bills to their first winning season, and then to AFL championships the following two seasons.

He co-founded the union representing players in the AFL, an experience that later led him to break with conservative congressional colleagues on labor issues. As a union leader, he became an advocate of equal treatment of black players in salary and non-salary issues.

Off the field, Kemp began his political apprenticeship, working as an editorial assistant to Klein, then editor of the San Diego Union, in 1960 and 1961, and later, between seasons, as an intern to Gov. Ronald Reagan.

After a string of injuries, Kemp left football in 1971 and ran successfully for Congress. He was elected to eight more two-year terms. Along the way, he served seven years as chairman of the House Republican Conference, advocating establishment of urban enterprise zones, letting tenants own public housing and creating a North American free-trade zone.

After a brief run at the Republican presidential nomination in 1988, Kemp was appointed secretary of Housing and Urban Development. In four years, he reformed the scandal-plagued department, pushed for urban renewal and visited the homeless from Philadelphia to East Los Angeles. He helped secure funding for more than 70 enterprise zones nationwide to encourage job creation in inner cities. In 1989, he told Newsday, “We must declare a new war on poverty. This time, we must win it.”

Today, Kemp is co-director of Empower America, a public-policy and advocacy organization he co-founded in 1993 with former education secretary William Bennett and former Ambassador Jeane Kirkpatrick. Empower America’s goals are to promote economic growth and entrepreneurship, expand freedom and democratic capitalism and advance social policies that empower people, not bureaucracies.