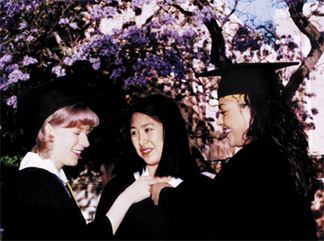 A crowd of 25,000 is expected to hear Jack Kemp – the former Buffalo Bills quarterback and nine-term congressman who was Bob Dole’s vice presidential candidate in 1996 – speak to graduates at USC’s 114th commencement ceremony on Friday, May 9.

The processional march into Alumni Memorial Park will begin at 8:30 a.m., followed by the commencement exercise at 9 a.m. Rabbi Susan Laemmle, dean of religious life, will deliver the invocation.

President Steven B. Sample will confer an expected 4,340 bachelor’s degrees, 2,887 master’s degrees and 1,127 doctorates during the ceremony. This year’s 8,357 expected graduates include students expecting to finish their course work during the upcoming summer sessions, as well as those who completed their programs during the 1996-97 academic year.

Commencement will be a homecoming of sorts for Kemp, who grew up in West Los Angeles, worked at his father’s trucking firm on Central Avenue, and graduated from Occidental College. Kemp said he will talk about “America on the eve of the new century, the role of USC, the future of California, the country and the whole world.”

In a phone interview from his Washington, D.C., office, he laughed and said, “It wouldn’t be a Jack Kemp speech unless I tried to save the whole world.”

At commencement, Kemp will receive an honorary doctor of laws degree. The university will also confer honorary degrees on:

* Jean-Pierre Changeux, a French neurobiology researcher, who will receive an honorary doctor of science degree. Changeux, who directs the Molecular Neurobiology Laboratory at the Pasteur Institute in Paris, has established through his studies the fundamental principles underlying neurotransmitter receptor functions. He has also furthered scientific understanding of the auto-immune disease myasthenia gravis.

* Michael Greene, president and chief executive officer of the National Academy of Recording Arts and Sciences (NARAS), who will receive an honorary doctor of music degree. Greene has been a recording artist and producer, president of recording studios and music publisher. Under his leadership, NARAS has emerged as a leading voice in music and arts education, intellectual property protection and censorship issues.

* William Wrigley, chairman of the board and chief executive officer of the Santa Catalina Island Co., who will receive an honorary doctor of humane letters degree. Wrigley, a USC trustee and president and chief executive officer of the Wrigley chewing-gum company, and his wife, Julie, have given $10 million to the USC Wrigley Institute for Environmental Studies on Catalina Island.

Magician Harry Blackstone is expected to make his third appearance as commencement announcer when the robed graduates, faculty and honorees march into Alumni Park.

Internet users will again be able to “watch” the event on the World Wide Web through live video images produced by “Tommy Cam,” a camera positioned at the northeast corner of the Student Union. The Web address is https://www.usc.edu/dept/TommyCam.

And in a first this year, USC will also broadcast the ceremonies in complete sound and 8-frame-per-second video via the Web. Viewers will receive the Webcast through USC’s home page at http://www/usc.edu, where they will find a link to a Progressive Networks Real Video server.

Among the speakers at satellite ceremonies for academic units after the main ceremony will be actor Louis Gossett Jr., who will speak to theater graduates, and Bill Mechanic, chairman of Fox Filmed Entertainment, who will speak to cinema-television graduates.

Gossett, who came to prominence for his work in Broadway plays such as A Raisin in the Sun, won a supporting actor Oscar for his role as a tough drill instructor in An Officer and a Gentleman. He also has won praise for his television work, including roles in the Roots and Return to Lonesome Dove miniseries.

Other notable speakers include Arthur Groman, a senior partner in the firm of Mitchell, Silberberg and Knupp, who will address School of Communi-

cation graduates. Groman and his partner Daniel Petrocelli represented the family of Ron Goldman in its successful civil case against O.J. Simpson.

Valedictorian Jing S. Chen, a biomedical engineering graduate who was a co-winner of the Emma Josephine Bradley Bovard Award at the academic honors convocation in March, said she will take the theme of her commencement address from Emily Dickenson’s poem Aspirations.

For the fourth year, university marshal John Callaghan will arrive on campus at 5:30 a.m. the day of commencement to begin coordinating the day’s events.

Using walkie-talkies to communicate with senior faculty members at the head of each of six columns marching into the park, Callaghan will have 25 minutes to get 8,500 graduates in their seats by 9 a.m.

Callaghan begins making arrangements for commencement each fall, with the help of his “right arm,” University Commencement Coordinator June Hudson; a “hands-on” steering committee made up of staff from Operations and Maintenance Services and the departments of public safety and transportation; and school coordinators from all academic units.

As in past years, 20 wheelchairs will be available at Topping Student Center for visitors who need them.