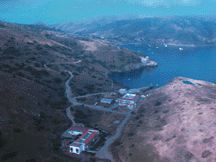 An aerial view of the Wrigley Institute for Environmental Studies on Santa Catalina Island. The facility officially opened on April 17.

A BERMUDA-STYLE “roof wetting” ceremony on Thursday, April 17, celebrated the official opening of USC’s Wrigley Institute for Environmental Studies (WIES) on Santa Catalina Island – along with the announcement of a new $5 million gift from the William Wrigley family.

An earlier $5 million gift from the Wrigleys, the family whose name has been associated with the island for most of this century, was announced in September, 1995. Matched by USC funds, it formed the financial impetus for the institute.

The new gift, according to President Steven B. Sample, will fund additional improvements on the island, create a second endowed chair in environmental studies at WIES, and “will bring us much closer to the institute’s goals.”

Sample hailed the Wrigley family’s long stewardship of Santa Catalina. “It was Catalina Island which first brought together USC and the Wrigley family,” he said, recalling the circumstances of the founding of the Philip K. Wrigley Marine Science Center on the island at a 1960s meeting between then-President Norman Topping and family members. Sample promised “the best days of [this collaboration] are still to come.”

Morton Owen Schapiro, the dean of the College of Letters, Arts and Sciences who spearheaded the institute’s creation, presided at the opening ceremonies, emphasizing to the gathering that the institute fulfilled the four goals of the university’s strategic plan: as a site for interdisciplinary studies, for its use of the university’s Southern California location, for its international outlook and as a site for undergraduate education.

“USC and the Wrigley family want the institute to become a world center for studies of the environment,” Schapiro said, “a place that will attract scholars and students from around the world.”

Wrigley, a trustee, is president and chief executive officer of the William Wrigley Jr. Co. and director and chairman of the board of the Santa Catalina Island Co. In making his donations to WIES, he pointed to his family’s association with the island since 1919: “We are pleased that Catalina’s unique environment, which the family has so long endeavored to preserve, will be the site of what we believe will be a unique institution.”

Wrigley will receive an honorary degree at commencement Friday, May 9.

His wife, Julie Wrigley, who is past chairman of the Peregrine Fund, said she looks forward to the institute’s continuing development and the educational and scientific results of its work.

More than $12 million has been invested in the institute so far. USC’s long-term plans call for an investment of $60 million by the year 2000, as well as the further expansion of institute facilities on the island.

Those facilities include the Philip K. Wrigley Marine Science Center, built on a 14-acre plot of land, at Big Fisherman Cove near the town of Two Harbors, that was donated to the university by the Wrigley family in 1965. Extensively improved and equipped with the latest scientific apparatus, the Wrigley Center was rededicated at the Thursday event.

“We plan to bring diverse elements of science, business, government and the public together to redefine the role of academic environmental science in society,” said WIES director Anthony Michaels, who participated in all three events.

At the opening, Schapiro singled out Michaels for praise: “As director, Tony Michaels has quickly and effectively laid a firm foundation for the achievement of this goal; he has, in fact, in a very short time surpassed our wildest expectations.”

Under Michaels, WIES has already embarked upon an ambitious program of teaching, research, meetings and outreach from its just-refurbished complex of laboratories, classrooms, and student and faculty housing at the island’s Big Fisherman Cove. Its laboratories are already the site of continuing research by local scientists. And starting in the spring of 1998, full-time USC students will spend semesters studying and conducting research on the island.

THE INSTITUTE IS fulfilling its role in the following ways, said Michaels:

* WIES has completed a $2.25-million laboratory and classroom renovation project, designed by Caldwell Architects. A major upgrade of communication facilities included installation of a high-speed Internet link to the mainland. A second phase of renovation, beginning in the fall, will upgrade living quarters, cafeteria facilities and roads, as well as make additional improvements to the laboratories.

* WIES will offer a full slate of short-term courses this summer on a range of topics, including environmental risk and business decisions, tropical environmental economics, biological oceanography, biology of fishes, marine geology and research diving training. Students will live on the island for one to three weeks.

* WIES will offer a full-semester program for spring 1998, including both a biology track and an environmental studies track. Michaels anticipates about 40 students, half of them biology majors and half majoring in environmental studies. The students will live on the island for 15 weeks, taking four-course loads in subjects that utilize the island’s unique resources. Negotiations are in progress with other universities to offer similar semester-long residences for their students.

* WIES will carry on an ambitious “telepresence” marine science education program beginning with Los Angeles and Long Beach Unified School Districts in conjunction with Southern California universities, museums, aquaria and research centers — a program that could potentially reach 1 million students. Among the first participants will be fourth- and fifth-graders at Foshay Elementary School near USC, who will integrate WIES resources into their “Island Explorer” program. Students will use images broadcast across the Internet from cameras on the island – some mounted under- water to study sea life, and others on land to observe the nesting behavior of eagles. The class will send students to the island for more intensive marine science experience in the fall of 1997.

* WIES has organized Friends of the Wrigley Institute for Environmental Studies, a group to support institute activities, and has begun publishing a quarterly newsletter.

IN ADDITION TO Michaels, WIES personnel include nine staff members on the mainland and 12 on the island. A search is under way for a distinguished environmental scientist to fill an endowed chair in biological sciences at WIES.

The roof-wetting ceremony that officially inaugurated WIES was adapted by Michaels from a Bermuda custom to celebrate the completion of a newly constructed house, combined with the maritime tradition of smashing a bottle of champagne across the prow of a new ship. At the opening, Julie Wrigley poured California champagne on the new institute’s tile roof, as what Schapiro called an “A-list gathering” of trustees and invited guests looked on.

At the Saturday conference, leaders of government, business and industry, the environmental community and academia gathered at the Santa Catalina facilities to discuss solutions to the air and water quality problems that society could face in five to 20 years. They also discussed mechanisms for more effectively understanding and resolving those questions. WIES, the USC Environmental Studies Program and the Southern California Studies Center were co-sponsors of the conference, “Confronting Environmental Problems in Southern California: Prospects for Future Cooperation.”

THE FOLLOWING DAY, an enthusiastic crowd of visitors – who were treated to the sight of hundreds of dolphins cavorting in the waters off the island as the

Catalina Express boat approached – got a first-hand look at the new facility. Adults and children thronged around “touch tanks” displaying sea creatures and took part in activities ranging from nature printing, demonstrations of an underwater robot, kelp forest research displays, eel feedings and a special lecture presentation on the island’s bald eagles – expected to be studied intensively in years ahead – by biologist David Garcelon. Visitors also got a close-up tour of the island’s hyperbaric chamber, used to aid divers suffering from the bends.

USC has been involved in environmental research since 1910, when it studied pollution at Venice Beach; it has also administered the Tyler Prize for Environmental Achievement, the nation’s premier award in the field, since 1973. The university’s environmental studies major, established only four years ago, is now the fourth most-popular major in the College of Letters, Arts and Sciences. More than 180 undergraduates are pursuing degrees in the field, with “literally thousands of others taking courses” in it, according to Schapiro. USC established its Center for Research in Environmental Sciences, Policy and Engineering (CRESPE) in 1994.

Currently, USC has more than 50 experts studying the environment in its departments of anthropology, biological sciences, chemistry, earth sciences, economics, geography and political science, as well as in the schools of architecture, business, engineering, international relations, law, medicine, public administration, and urban planning and development.