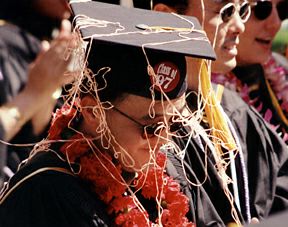 Amid throngs of cheering family and friends, more than 420 students from the Health Sciences Campus emerged from several commencement ceremonies on May 9 with diplomas in their hands and smiles on their faces.

USC President Steven Sample spoke during the School of Nursing Program’s ceremony and also handed out each diploma personally.

Lynette Merriman, director of admissions and student affairs for the program, said Sample’s participation boosted already soaring spirits, adding that “the faculty and staff were honored to have him there and the students were thrilled to shake the president’s hand.”

More than 145 degrees were conferred during the ceremony, which featured comments from Nancy Fugate Woods, professor at University of Washington’s School of Nursing and director of the university’s Center for the Women’s Health Research.

During the School of Pharmacy ceremony on the HSC quad, keynote speaker Jerome A. Halperin, executive vice president of the U.S. Pharmacopeial Convention, Inc., encouraged graduates to work only in fields that challenged them intellectually and constantly renewed their enthusiasm.

The School of Pharmacy awarded 155 degrees, and also awarded its first-ever certificate in gerontology to graduate Welly Mentee.

The Department of Occupational Science and Occupational Therapy awarded 130 degrees during its ceremony, which featured a keynote address by Stephen Toulmin, the Henry R. Luce Professor of Multi-Ethnic and Transnational Studies and USC anthropology professor .

This year, students from the Department of Biokinesiology and Physical Therapy joined the Graduate School satellite ceremony in Bovard Auditorium.

The Department of Biokinesiology and Physical Therapy awarded nine degrees, seven of which were Doctorates of Physical Therapy (DPT). This year’s seven recipients represent the remainder of the first class to complete the DPT program; the first 15 students received their DPT degrees last year.

The Primary Care Physician Assistant Program will hold its ceremony on July 13 and feature as its speaker John Western, president of the California Academy of Physician Assistants, and graduate of the USCPA program. The will be held on the Health Sciences Campus quad at 3 p.m.