USC President C. L. Max Nikias led a delegation of trustees and senior administrators to meet with lawmakers March 8 at the State Capitol in Sacramento. 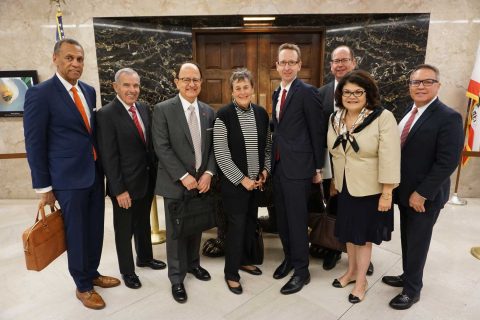 Topping the agenda was a proposed a proposed $1,000 cut in the maximum Cal Grant Award for students attending private nonprofit colleges. The cut has been proposed as part of Gov. Jerry Brown’s latest budget and is slated to go into effect July 1. This is the latest pressure on Cal Grant awards for students attending private non-profit institutions. In relation to the cost of education, the award has actually decreased in value by 37 percent since 2000.

The USC delegation voiced its support for AB 1166, the College Opportunity Act, which reverses the proposed cut.

“We made the argument today that students who come from socioeconomically disadvantaged backgrounds should be able to access a full spectrum of choice when it comes to higher education,”  Nikias said.

“And not only does it cost less for the state, but the graduation rates for Cal Grant students at USC is 94 percent — significantly higher than any public institution in California. It was heartening to hear words of support from many of the lawmakers we met today, and we remain hopeful that this vital program will not see further cuts.”

Cal Grants for students at private universities are supplemented by the institutions’ own financial aid, while Cal Grant recipients at public universities have their tuition further supplemented by the state. That means that it is three times as expensive for the state to fund a Cal Grant recipient at a University of California campus as it is to fund that same student at a private institution.

The USC group also briefed legislators on USC’s plans to build a biotechnology park in Boyle Heights, stressing that the project promises to bring substantial economic development to the region.

The delegation relayed the success of the USC Village job fair, also held March 8, during which some 1,500 applicants were interviewed for job openings in customer service, maintenance, building services management, custodial services and other permanent positions. USC expects to create similar opportunities for residents living near its Health Sciences Campus in Boyle Heights once the biotech park is built.

Following a packed day of meetings, Nikias hosted nearly 250 alumni and guests at a reception near the State Capitol. Guests Rick (MBA ’82) and Dawn Pickering presented the president with a Trojan historic treasure they had found at an estate sale in Sacramento – a scrapbook belonging to Mary Martin, a USC pharmaceutical major in the mid-1920s who was a student leader and privy to a number of pieces of communications that hold historical significance. The scrapbook is a collection of news clippings, letters, Alumni Association items, play bills, sports items and other summaries of USC-related activities covering the period of 1924-41. The scrapbook will soon be put on display for the USC community.

The Pickerings also brought with them a 1923 pre-Tommy Trojan USC warrior statue, which came from the same estate sale.

Startup specializes in sensor technology for the first “smart” system seen as a boon for patients.

Computer scientist creates sleeve embedded with elements that simulate sensations. The device could be a therapeutic tool for people with anxiety.

A letter from Rick Caruso, subcommittee chairman of the Executive Committee, notifies the community of a search for a new USC president.