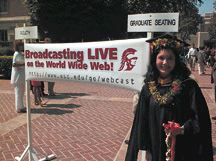 Alithea Corter (left) talked about receiving her master’s degree in gerontology as people around the world watched and listened to the world’s first live Internet commencement broadcast May 9. About 400 Web-users around the world each day continue to visit USC’s commencement Website, where the entire program remains available in reruns. The Webcast was the brainchild of Chief Information Officer Jerry Campbell. Chuck Hellier, technology director of UCS Micro-Computing System Support, and Rick Lacy, co-coordinator of the Center for Scholarly Technology, spearheaded the project. Associate vice president for student affairs Kristine Dillon hosted the Webcast and USC News Service media representative Paula Korn co-hosted and interviewed deans about preparing students for careers in the emerging new world of technology. Other key players were Jason Chan, production manager of the Instructional Television Network, who directed the video coverage; and Alice Parker, vice provost for research and graduate studies, who housed Webcast headquarters. The commencement archive page is at https://www.usc.edu/go/webcast/commencement. For commencement highlights, see page 8. For a complete rundown of commencement press coverage, see the June 2 “USC in the News” column.