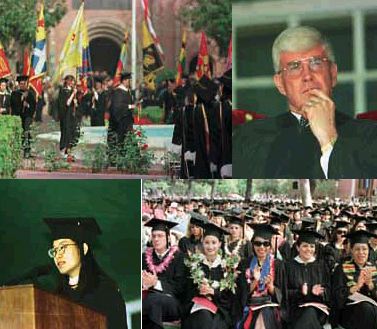 USC’s 114th commencement was a day of tears and laughter.

Near the end of the May 9 ceremony, a Navy ROTC midshipman wiped his eyes in the emotion of closing out a four-year chapter of his young life. Afterward, graduation caps sprouted plastic blimps and Egyptian pyramids, and gowned graduates waited patiently in line to have their pictures taken next to Tommy Trojan for the last time.

Earlier, a crowd of 25,000 had heard commencement speaker Jack Kemp offer self-deprecating anecdotes about his careers in politics and professional football, a news-making policy pronouncement and a call to “put an end to that persistent strain of hate and fear in our midst.”

Kemp called for building global security by giving President Clinton fast-track authority to negotiate a free-trade zone from Canada to South America – a position that prompted a story in the Los Angeles Times speculating on Kemp’s candidacy for president in the year 2000.

Kemp also referred several times to valedictorian Jing Selia Chen – born in China’s Jianxi province – as an example of the multicultural nature of the American dream.