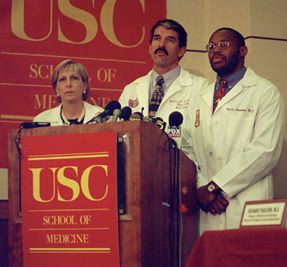 From left, embryologist Mary M. Francis and fertility specialists Richard Paulson and Melvin Thornton field questions from the media following the disclosure that a 63-year old woman had given birth.

USC physicians stunned the world last month by announcing that a 63-year-old woman in their care had given birth to a healthy baby girl late last year.

On Wednesday, April 23, the team led by Richard Paulson, professor of obstetrics and gynecology, announced that the mother had successfully undergone in vitro fertilization and frozen embryo transfer at

USC’s Program for Assisted Reproduction. A description of the case was published in the May issue of the medical journal Fertility and Sterility.

Paulson, who directed the patient’s care at the program, and his colleagues believe that their patient represents the oldest successful pregnancy on record. The baby, delivered by Caesarean section last November, weighed 6 pounds 4 ounces.

When the patient first came to the USC clinic, she represented herself as being 50 years old – 10 years younger than she actually was. Had she disclosed her actual age, she would not have qualified for treatment at the USC program, which has an age limit of 55. Only after becoming pregnant did she reveal her true age to her obstetrician.

“All women over the age of 45 who wish to undergo oocyte (egg) donation must first pass a series of rigorous tests to ensure that they are fit enough to withstand the stress of pregnancy,” Paulson said.

“This patient passed all the screening tests and produced multiple medical records from other institutions, all of which attested to her stated age of 53 at the time of infertility therapy. We had no reason to doubt her word, and we were not trying to set any records. The average age of women coming to us for oocyte donation is 43,” he said.

The Southern California resident has been married to her 60-year-old husband for 16 years, and the couple have no other children.

“It is remarkable that a 63-year-old can successfully conceive and adapt to the rigors of pregnancy sufficiently well to deliver a healthy baby at term,” Paulson said.

“It may be that women have not one, but two biological clocks – the clock for the eggs and ovaries seems to run out much earlier than the one for the uterus. This is why oocyte donation works so well for women in their 40s and beyond,” he explained.

Paulson believes that physicians should not be legally required to confirm the age of in vitro fertilization patients. Such regulation, he said, would prove harmful by straining the physician-patient relationship and could jeopardize the medical condition of women who are not entirely forthcoming in discussions with their doctors.

The April announcement touched off a flurry of international press coverage. When the story broke on the afternoon of Wednesday, April 23, a swarm of phone calls hit the Health Sciences Campus, bringing nonstop requests for information about the pregnancy and the deception that preceded it.

Since the original announcement, the name of the patient, Arceli Keh, has become public. With her child’s financial future in mind, Keh, of Highland, Calif., has sold the exclusive rights to her story to the National Enquirer.

Hundreds of newspapers, magazines and broadcast outlets reported the story when it broke. On the morning of Thursday, April 24, Paulson’s paper describing the pregnancy made front-page news in the New York Times, Los Angeles Times, Washington Post, Newsday and USA Today. The Associated Press carried the story worldwide.

That evening, “World News Tonight” with Peter Jennings covered Paulson’s announcement, and ABC’s “Nightline” devoted the evening’s program to the pregnancy story. In anticipation of the announcement, Timothy Johnson, ABC’s medical correspondent, videotaped an interview with Paulson some weeks before. In the pre-dawn hours of April 24, Paulson appeared live on NBC’s “Today” show and CBS’ “This Morning.”

A press conference at HSC later that morning attracted a fleet of local media and national network correspondents. Later in the day, Paulson appeared on the PBS “McNeil-Lehrer News Hour.” CNN covered the story throughout the day, and radio coverage included reports by the CBS Radio Network and NPR’s “Morning Edition.”

In the following days, New England Journal of Medicine executive editor Marcia Angell published an editorial related to the announcement in the New York Times, while USC ethicist and legal scholar Alexander Capron described his take on the case on the Los Angeles Times op-ed page. Time and Newsweek each covered the story as well.