A new independent economic impact study on USC shows that the university is one of California’s strongest economic engines. The study found that USC spurs $8 billion annually in economic activity in the Los Angeles region and California. 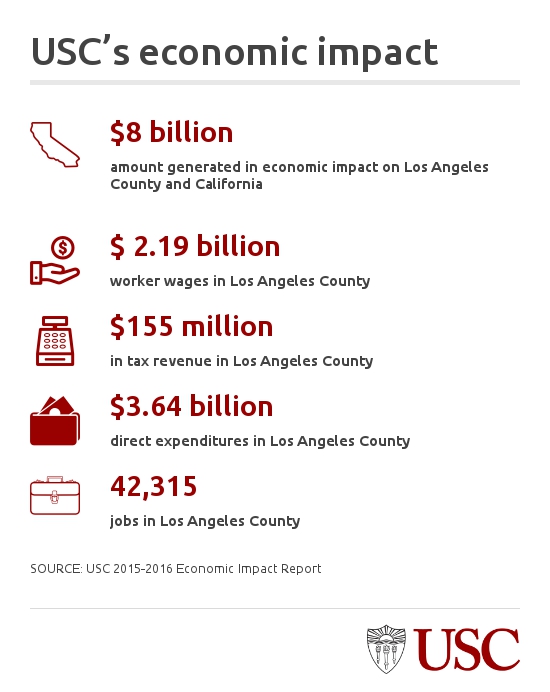 “USC is not only the largest private employer in the city of Los Angeles, but also a major economic powerhouse in California,” USC President C. L. Max Nikias said. “Our impact extends throughout our region and the state with thousands of local jobs, purchasing power that is invested back into our communities.”

According to the report, USC generated:

The study, commissioned by the university and conducted by Beacon Economics, reviewed the impact of USC’s operational expenditures during the 2015-16 fiscal year. The analysis used university-related spending, including capital projects, spending by USC faculty staff and students and expenditures made by out-of-town visitors, as well as the operation of Keck Medicine of USC.

$80 billion over a decade

The snapshot indicates the university will contribute well more than $80 billion to the economy over the next decade.

USC is a very significant asset to the region and the state.

“It shouldn’t be a surprise that one of the premier private universities in the country has such an outsized impact on the economy of Southern California,” said Christopher Thornberg, founding partner of Beacon Economics. “USC is a very significant asset to the region and the state.”

The report also highlighted USC’s investment in its local community through partnerships and programs.

“USC is partnering with our neighbors to create a pipeline to higher education for their children and a pathway to employment for them,” said Thomas S. Sayles, USC senior vice president for university relations. “Our education outreach programs impact thousands of children from pre-school to college while our economic programs help small businesses and workers succeed.”

The study comes as the university exceeds its goals in one of the greatest fundraising efforts in the history of higher education and the biggest physical expansion in the university’s history. Nikias recently announced the extension of the historic Campaign for USC as it nears the $6 billion mark 18 months ahead of schedule.

And later this year, the $700 million USC Village opens directly north of the University Park Campus. The massive retail and residential project will enhance campus life for students while opening up an array of new options for the neighborhood. Nikias also announced plans for the construction of a new hospital on the Health Sciences Campus, focused on cutting-edge medicine and surgery.

Attendees line up around the block for Wednesday’s job fair, and more than 1,000 resumes were submitted beforehand.