For more than 20 years, Jonathan Samet has developed strategies to prevent smoking in Mexico, with help from scientists and leaders at the country’s National Institute of Public Health (INSP).

The USC Distinguished Professor teams with several of Mexico’s 12 institutes of health, which aim to improve public health through research, policy and care. The INSP’s research centers and school of public health examine tobacco, obesity and other issues that contribute to health problems.

Samet assisted in the development of the institute’s Center for Tobacco Control Research and co-founded the Summer Program in Public Health, one of the largest of its kind in Latin America, with INSP Director Mauricio Hernández-Ávila. Samet has taught in the program every year since it began 22 years ago and has arranged for Trojans to teach there as well.

Since 2008, the year of Samet’s arrival at USC, the Department of Preventive Medicine has gained momentum in its research and scholarly exchanges with Mexico. Samet’s ties to INSP have enabled USC researchers to collaborate on various public health projects in the country and among Mexican and immigrant populations.

“The U.S. and Mexico share more than a border,” said Samet, holder of the Flora L. Thornton Chair in the Department of Preventive Medicine at the Keck School of Medicine of USC. “We share health challenges but also the expertise to combat them.”

In 2015, preventive medicine professors Lourdes Baezconde-Garbanati and Mary Ann Pentz founded the Center for Health Equity in the Americas to advance health equity in the region through research, training and partnerships. Using findings from an international summit in October, the group is working with INSP on a cervical cancer prevention report to be published in INSP’s journal, Salud Pública de Mexico, later this year.

Other centers in the department, including the Institute for Global Health, the Program on Global Health & Human Rights and the Immigrant Health Initiative, have hosted Mexican researchers and collaborators for talks, seminars and training on subjects, including sexually transmitted infections, obesity, H1N1, premature mortality and cervical cancer prevention.

Institute for Global Health Associate Director Heather Wipfli collaborated with INSP in 2016 to survey Mexican corporations about how health and wellness are integrated into their workplaces. The project is helping to inform the global cancer prevention programs begun by the American Cancer Society.

Another recent project, led by USC neurologist John Ringman and Mellissa Withers, assistant professor of clinical in the Department of Preventive Medicine, examined knowledge and attitudes regarding Alzheimer’s disease, genetics and participation in research among populations at-risk for a rare form of early onset familial Alzheimer’s disease in Mexico.

In 2015, the Department of Preventive Medicine welcomed INSP postdoctoral fellow Katia Gallegos as part of an initiative with Mexico’s National Council of Science and Technology, in which USC provides scholars from Mexico with residencies in fields related to science, technology and innovation.

Gallegos is working with large binational data sets to determine the impact of acculturation in patterns of physical activity and sedentary behavior, as well as its association with body mass index observed in Mexicans, Mexican immigrants and Mexican-Americans. In addition, she is teaming with U.S. tobacco-use databases to study young people with mental illness who use multiple tobacco products.

Along with Mexican and other U.S. scientists, USC researchers in 2013 discovered a genetic link associated with higher Type 2 diabetes risk among Mexican populations. Most recently, a study found that Latino children living in areas with higher levels of air pollution have a greater risk of developing Type 2 diabetes. 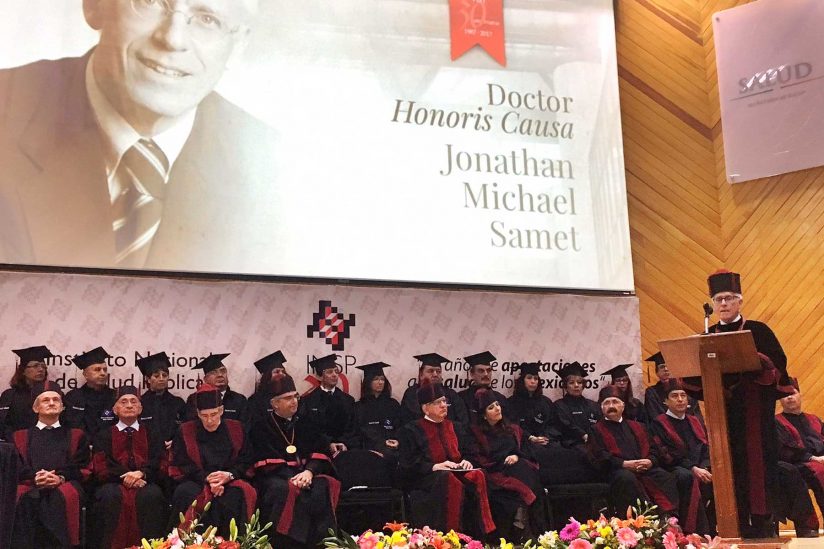 Now celebrating its 30th anniversary, the INSP gave Samet an honorary doctorate recognizing his contributions to public health on Jan. 27.

At that event, Hernández-Ávila cited Samet’s scientific and professional achievements, among them his 27 books, 127 chapters and more than 350 scientific articles. “This Honoris Causa is awarded to recognize Dr. Samet’s work for global public health — for the health of all people,” he said.

A graduate of the University of Rochester School of Medicine and Dentistry, Samet has participated since the 1980s in the reports of the U.S. surgeon general on smoking and health, and he served as senior scientific editor for the 50-year anniversary edition in 2014. Most recently, he contributed to the 2016 surgeon general report on e-cigarettes and youth, the first of its kind.

His work has contributed to national legislation to control tobacco use, air pollution and radiation both in the United States and Mexico.

“I’m honored to be a part of this celebration to mark INSP’s decades-long commitment to public health in Mexico and to receive this very high recognition,” Samet said. “I look forward to continuing our partnership for many years to come.”

A new initiative will give students an opportunity to collaborate with participants of USC’s International Artist Fellowship program.

The residency will be based at the USC Price School’s Sacramento program; the first will focus on energy policy.