Walking through a Palestinian refugee camp flush with large families and the ever-looming threat of war and violence nearly six years ago, she knew that’s where she needed to be.

Through her program Girls Rise, Saba MSW ’15 helps to empower and educate young Palestinians affected by war and poverty in Bethlehem.

Under Saba’s leadership, the program primarily facilitates what she calls a “youth-led action research process,” a method that trains girls, ages 11 to 16, as researchers, giving them the opportunity to study social problems in their communities and then collectively strive to resolve them.

“They are so resilient — it’s so sad that all of their traumatic experiences [with the military conflicts in the region] have become normalized for them,” Saba said. “Just having girls to support each other, to do things that are fun, to do things that make them realize they have a sense of purpose … I think it would really make a difference for youth in other areas as well. To have an adult hear them and their opinions be valid is life-changing.”

Saba’s journey to Palestine in 2011 began in Los Angeles. During her junior year in high school, Saba lost her father, who had helped to instill Palestinian culture and values in her at an early age. He died after a year-long battle with brain cancer.

Her father’s passing changed her family dynamic and career path as well.

Initially, she wanted to help people in third-world countries as a doctor, but because of the traumatic experience of watching her father battle cancer in the hospital, Saba decided to pursue a career in public service.

I would not have started Girls Rise if my dad had not passed,” she said. “By going to Palestine and volunteering, it was a way for me to honor his legacy.

“I would not have started Girls Rise if my dad had not passed,” she said. “By going to Palestine and volunteering, it was a way for me to honor his legacy.”

But not everyone in her family saw it that way.

“My family is old-fashioned. Especially as a young woman, I’m not supposed to be moving out of the house until I get married,” Saba said. “It was a battle for me to go to college at UC Berkeley; everyone in my family got involved and said, ‘You shouldn’t go. Your dad wouldn’t have wanted you to go.’ I felt a lot of guilt, [but] it was the best thing that ever happened. I really grew out of my shell.”

During her time in Berkeley, Saba joined Students for Justice in Palestine and learned about activism from her 2011 trip to Bethlehem.

“What stood out to me was the Palestinian youth and how they have become so apathetic because they’ve grown up under a military occupation — that’s all they know,” Saba said. “They have lost hope in seeing a change in their environment. There is so much apathy and hopelessness in the youth, when they [should] have positivity and hope. That kind of stuck with me.” 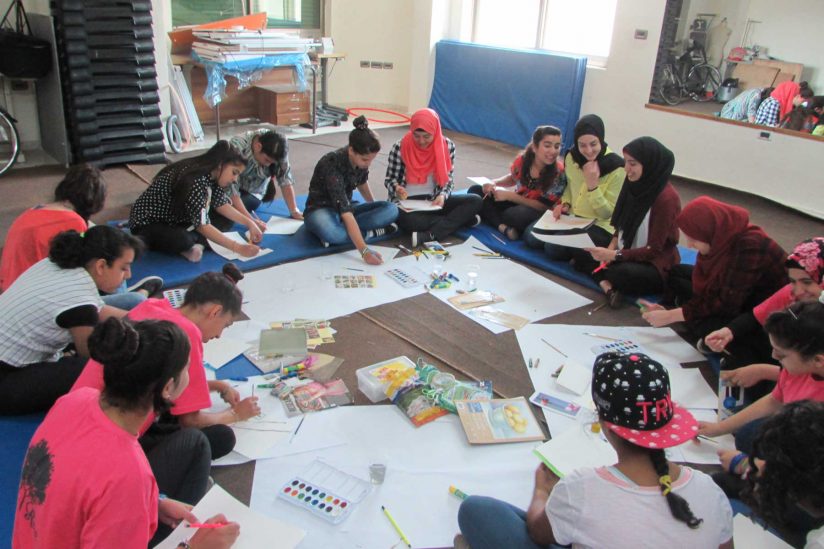 In the spring of 2013, an undeterred Saba spoke to directors of organizations in Bethlehem as a part of an elective course on peace and conflict studies she took at the time.

After securing a partnership with the Alrowwad Cultural and Arts Society, Saba received a $25,000 grant from the Ella Lyman Cabot Trust to complete her service project at a refugee camp that holds a special place in her family’s history.

“I got resistance from my family once again who were afraid of me going for such a long time — and it can be dangerous there,” Saba said. “I called my grandmother, my dad’s mom. I was so nervous about telling her. It turns out she had been a teacher at that refugee camp for 25 years with the United Nations. I’m a person that believes in signs … [and] that was a sign that I was supposed to do this.”

Getting off the ground

As a part of the grant, Saba began an eight-month program in October 2013, with subsequent five-week programs every summer since.

“For the first year, the girls identified poverty as the main issue they wanted to focus on. With other religious areas in Bethlehem, that’s why tourists come and that’s the main source of income,” she said. “When there’s violence in the area, tourists stop coming and the economy really suffers. We were thinking that Bethlehem needs factories to produce something so that no matter what happens, people can have jobs.”

Girls Rise took that idea and implemented it on a smaller scale. The young women created cooking packages sold in a local gift shop that included ingredients for a typical Palestinian breakfast: a cup of tea, bread, olive oil and za’atar (a dip made out of thyme, sesame seed, sumac and salt). They even sourced the components of the packages from local vendors to show their support for the local Palestinian economy.

The funds collected from the packages were used the following summer to support the program’s field trips and other empowering activities. In addition to action research, Girls Rise travels to the Dead Sea, Palestinian universities and the tomb of the prophet Abraham. They also are active in art, dance, photography and yoga, and they listen to talks from inspirational female speakers.

At the end of the program, Saba conducts an interview with each girl and her mother, assessing the efficacy of the experience.

“The girls are now more confident and self-expressive. They’re increasing their social consciousness about what’s going on in society, what they can do to change it. They’re having positive self-images,” Saba said. “[The program] can have positive effects for themselves and their community.”

From Palestine to L.A.?

After seeing the benefits of Girls Rise in Palestine, Saba is hopeful that the program can be implemented stateside.

As a psychiatric social worker with the Los Angeles Unified School District, Saba provides therapy for students on a daily basis and has noticed the need for a program like Girls Rise in Los Angeles.

“One thing that I tell people is that I’ve seen change in the girls, I’ve seen what they’ve done and I’m proud of them,” Saba said. “I love the girls I work with — I’ve gained so much from them. I don’t think I could have chosen a better summer vacation.”

USC Dornsife alum Mahmood Sariolghalam is a scholar and specialist in Middle East politics as well as Iranian foreign policy and political culture.

A Brand of Complex Research

Traveling 7,600 miles to Jordan, Laurie Brand began her massive research project that also will take her to Algeria, Egypt and Lebanon before the end of 2010.